The Song of India Poem Questions and Answers, Notes, Summary

The Song Of India Notes KSEEB Solution Question 2.
What are the epics? Why does the poet call the temples as ‘epics in stone?’
Answer:
Epics are long poems, typically the ones derived from ancient oral tradition, narrating the deeds and adventures of heroic or legendary figures or the past history of a nation. The poet calls temples ‘epics in stone’ because each temple has a story to unfold. Moreover, on the walls of each temple, there are numerous sculptures narrating many a story.

Song Of India Summary KSEEB Solution Question 3.
Who does the poet mean by ‘of your children that died to call their own’?
Answer:
The Soldiers who guard our mother and motherland are mother’s children and they sacrificed their lives for the sake of their motherland. So they are her own.

The Song Of India KSEEB Solution Question 5.
Why is the poet ‘querulous’? What does he want to do?
Answer:
The poet wanted to sing about the achievements and progress made by the countrymen. He asks his mother (motherland) if she wished to hear about the dams and lakes, about steel mills or of the atomic age the mother asks him to sing songs about ‘strikes’ and about the leaders who emerged after such ‘strikes’ (revolutions).
So the poet asks her in a querulous (complaining) voice if there were no songs which he could sing for her that he could sing wholeheartedly, a song that is pure and which will remain in memory for a long time.

Song Of India Notes KSEEB Solution Question 6.
How is he answered? Describe the vision. (Refer stanza 4)
Answer:
The poet was answered by a wonderful vision. A vision of a new and bright future. In the vision, he saw the mother (motherland) rise gloriously against the blue sky. The three milky – white oceans, ie., the Arabian Sea, Bay of Bengal and the Indian Ocean, rose and fell with steady powerful motions. (There was calm on the sea). Their waves sent forth a wonderful and illuminated her. She seemed to sit of this illuminating light to write the ‘book of marrow’. (a new reign, a new future’).

The Song Of India Question Answer KSEEB Solution Question 1.
What is the picture of India that you get in stanza 1 of the poem?
Answer:
The first stanza, like the stanzas to follow, offers a mixed picture of India. India is described in terms of its physical features which are beautiful, be it the majestic Himalayas, be it the magnificent seas, be it the clear sunrise. However, there are cracks in the beauty of the country as there is poverty and squalor all over. Hence, the Mother challenges the poet and tells him that he cannot write a song of praise without reckoning with these negative strains.

The Song Of India Summary In Kannada KSEEB Solution Question 3.
Explain the lines ‘A song bathed in the stainless blue un vaporing in the void.’
Answer:
‘Stainless blue’ refers to the clear sea. The metaphor refers to a song of pure joy that is free of negativity. The phrase ‘Unvapouring in the void’ can mean crystal clear, without the mist in the openness of the sky. On the whole, this is also a reference to the possibility of singing a song of pure joy, free of ugliness and devoid of doubt.

The Song Of India Summary 10th Standard KSEEB Solution Question 4.
What does ‘the Motherland writing the Book of the Morrow’ signify?
Answer:
It means the poet’s desire or wash was the motherland or mother sitting on the throne and write the future of our country. She wrote in the book of the morrow. Which signifies the earth’s destiny.

The Song Of India Poem KSEEB Solution Question 5.
Write in brief your vision of the future of India.
Answer:
According to the poet, the future of our country can open up on mothers’ foreheads. It is like the earth’s destiny. All the sorrows and suffering came to an end and the new things and views will come and make the people happy. The Sun God will protect the earth and saves all.

I envision a very bright future for India. An India where there all it people work hard for the development of the country. All Indians should be happy and live harmoniously with each other. There should be no discrimination and all the people should be treated as equals.

The Song of India Additional Questions and Answers

10th English The Song Of India Notes KSEEB Solution Question 2.
The poem does not end with a note of
A) sarcasm
B) pessimism
C) optimism
D) fanaticism
Answer:
D) fanaticism

Answer the following questions in a word or a sentence each:

Question 1.
Which snow-peaked mountains are being referred to in the poem ‘The Song of India’?
Answer:
The Himalayas.

Question 2.
Name the book that the Mother writes.
Answer:
The Book of the Morrow.

Answer the following questions in 2-3 sentences each:

Question 2.
How does the poet praise India being developed in industry and technology?
Answer:
The poet is ready to sing praises of industrially and technologically developed India as he has witnessed dams, lakes, steel mills, and shipbuilding yards. He is, confident that the hard-working men of India can put India on the glorious page of the atomic age.

Question 3.
What does the poet V.K. Gokak want to sing about his Motherland?
Answer:
The poet wants to sing in praise of mother India. He wants to sing a song of praise of the snow-peaked Himalayas that protect the country, the three seas that make India a peninsula, and the sunrise that heralds new dawn replacing the dark night.

Answer the following questions in 5-6 sentences each:

Question 1.
How does the poem present the ills or problems affecting our country?
Answer:
The poem juxtaposes the strengths and weaknesses of the country. If the strengths are mentioned by the poet as the possible themes for his song of praise of the motherland, the ills are voiced by the Mother herself as the spokes in the wheel of progress. The two voices make it very clear to the poet that India as a country has enough reasons to be both proud and ashamed of. India has natural resources, manpower, patriotism, magnificent temples and technological prowess; yet India also has beggars and lepers, filth and dirt, ignorance and helplessness, revolts and strikes. Thus for everything that is beautiful, there is something that is ugly; for everything that is healthy, there is something that is unwholesome. The poet employs the technique of contrasts to highlight this ambivalence of India.

Read the following extracts and answer the questions given below them:

Question 1.
Sing of the beggar and the leper That swarm my streets.
a) Whose streets are being referred to?
b) What does the word‘swarm’ indicate?
c) What, does the poet want to sing about?
Answer:
a) India’s.
b) It indicates the large numbers of beggars and lepers that are found on the streets of India.
c) The poet wants to sing of the Himalayas, the seas and the dawn.

The Song of India Poem Summary in English

This is one of the popular poems of the poet. Though he was a poet, he was also a patriotic person. This is a simple poem, her the poet describes a person towards his motherland. This word The language of the poem is versatile, flow like between he/she (poet) with their mother. He/She asked their mother that they can sing for her. They questioned their mother that what type of song they want to sing? They explained that they want to sing about the Himalayas, their snowbound peaks or the three great oceans such as the Bay of Bengal, the Arabian Sea and the Indian ocean which wash her feet or the beautiful dawn with its golden touch of nature.

For this, the mother said in a calm voice. She wants the song of the beggar, leper or any untrodden people. Or the crowd of the streets, impure or dirty places or any secluded places. The son/daughter (poet) ignores their mother’s request and again asked about the topic of the Song. They continue their talk asking about the song of rock-cut temples, Epics in stone or sacrifice of her children and her own children or the inspired persons, famous prophets or the great persons who made great tasks or any worthy pilgrims.

Hearing the sons/daughter’s words, mother get upset and angrily she asked to sing about millions of people who toiled and kept their life to a great cause, the experienced old people or ignorant people or helpless children who were very meek and dwelt in dark places. These words make the author that his heartbeat increased and the words heard a sound of a bell and make him emotional. This situation is like a great white bird flew in a pitiful manner. He/she become very nervous and asked about the topic of the poem Even though he was afraid to question her but believed in his work, again he requested her what type of songs she liked whether he can sing about the dams and lakes or any steel mills (factories and Industries) or shipbuilding yards like Vishakapattanam or any great technologies or any great recognized events or any atomic incidents etc.,

For this mother rejected and said you may sing on these topics but you can sing about the early and the important strikes, brave men and their goal, their achievements or any class wars and their consequences. The poet complained and in a humble condition, he/she questioned that they could n’t sing for her wholeheartedly and in pure love? He/she sang for her. That song was bathed in the stainless blue that means it is very touching and appears into nothingness.

At that time the mother stands. That scene is really extraordinary. She looks like this. Mother was decorated by blue sky, her dress is marvellous, milk-white oceans revolve around her. The waves of the oceans were entering and moved with power and make her sit on the lighted throne and she wrote the book of Morrow. Her forehead opened like earth luck. The Sun God eradicate all sorrows. There was a clear down. It was like a nightmare that fled the night and the Sunbeam was glowing on the leaves, flowers, and plants. All the nature looks more beautiful and saved by the sun – beam’s unseen hand. Here the Poet’s intention is that the time will come to establish the new ideas. The poet always encourages new thoughts and ideas.

The Song of India Poem Summary in Kannada 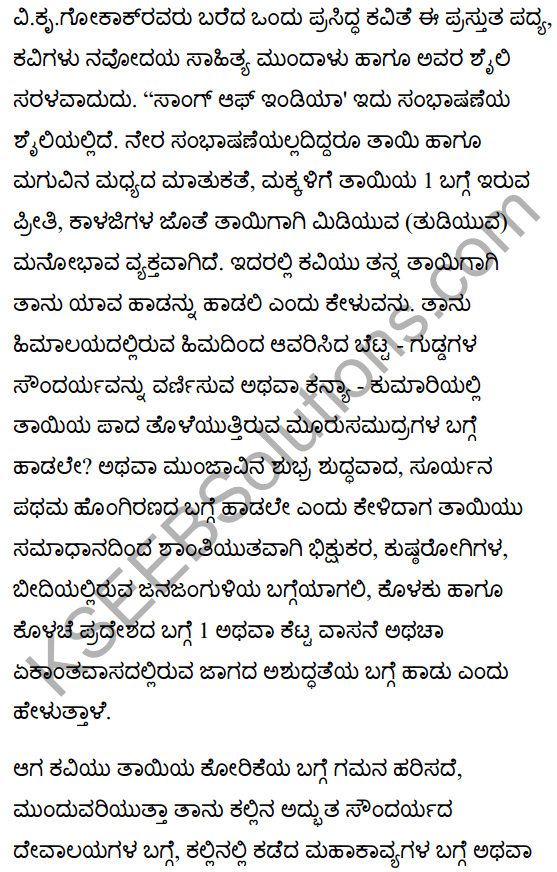 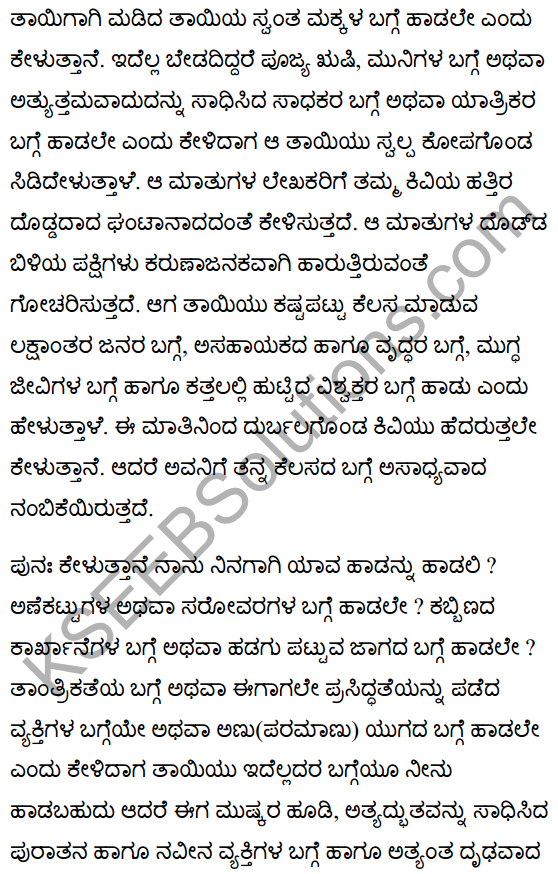 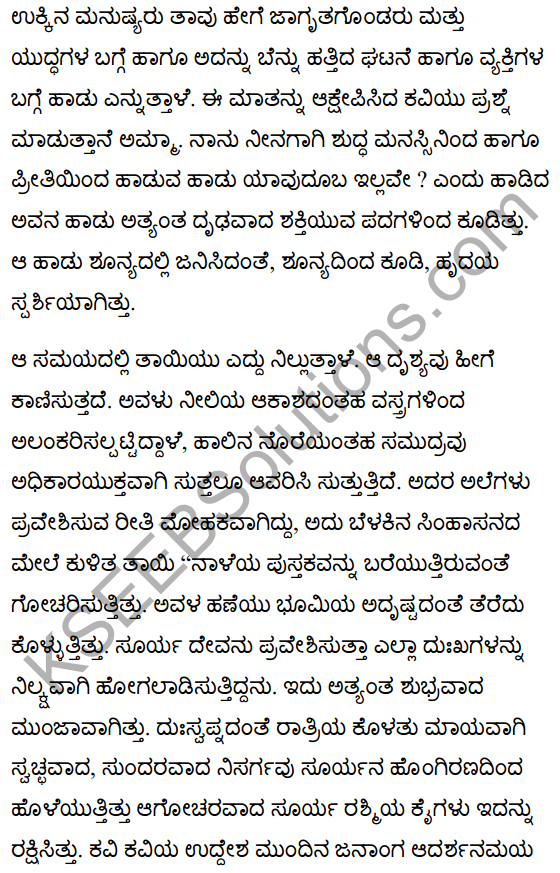 Hope all the information given regarding Karnataka Class 10 English Solutions Chapter 4 The Song of India will help you to get good knowledge. For any queries, you can contact us and clear your doubts. Connect with us using the comment section. Also, we love your feedback and review. Get your Chapter Wise Karnataka Secondary Education Examination Board Class 10 Textbook Solutions for English PDF start learning for the exam.