Ballad of the Tempest Poem Questions and Answers, Notes, Summary

Question 2.
The poet says ‘This is a fearful thing in winter….’ According to the poet, what is referred to as a fearful thing in winter? How would be the condition in the deep sea during winter on the sea?
Answer:
The sailors need to carry life jackets. There should also be small boats which might be of use if the ship is wrecked. The sailors need to be good swimmers. They should have good knowledge of the direction of the wind, sea, and sea creatures.

Question 3.
How does ‘it’ affect the sailors? (Read the first two stanzas)
Answer:
During winter the seawater will be very chill and became frozen into ice. If the ship shattered, the condition would be serious. The sailors had to face many difficulties. It affects the sailors to death. The rescue was a formidable task.

Question 5.
When the captain shouted “We are lost”, how did his daughter react?
Answer:
The captain’s daughter was little and innocent. In this situation, she reacted calmly. She took the captain’s cold hand and whispered. God is there upon the sea as God on the land. God was the same everywhere.

Question 6.
The crew-mates kissed the maiden and spoke in better cheers. What made them feel cheerful?
Answer:
By hearing the innocent words of the little maiden, the crew-mates got some hope. The sudden changes occurred in their heart. They kissed her and cheered up.

Question 7.
‘A ship is always safe at the shore, But it was not built for that’. What does this mean?
Answer:
The ship was built to sail on the sea and ocean. If we keep the ship at the shore, it is safe. But what is the use? Ships sail on the sea, it should face the dangers that would come across. Then only its purpose survived. So it was not built to keep at the shore. Similarly, the man was born to some purpose, if he was not ready to face the problems or challenges of life, what is the use of his life. So we are ready to face the challenges.

Question 1.
The poet uses the phrase ‘the hungry sea’. What can the reader imagine from this?
Answer:
The hungry sea means, the sea wanted something to eat. When the violent storm was deep and the ship was going to wreck. The seamen or the sailors had to face great risk. In this situation, the crew might think that they might become victims. The would feel like this because of fear. The reader could imagine that sailor’s life is not safe. The figure of speech employed in lines 11 and 12 is personification.

Question 2.
The poet uses expressions which are unusual, evocative, and rhythmic. Some examples are given with explanations.
Answer:
i Shattered by the blast – Onomatopoeia
ii Midnight on the waters – the image of one imposing (covering) on the other.
iii. breakers talked with death – Personification
iv. Captain staggered down the stairs – the image of movement.
v. icy hand – (tactile) sense of touch.

Ballad of the Tempest Additional Questions and Answers

Question 5.
The sailors were crowded in the
a. Cabin
b. room
c. temple
d. at sea shore
Answer:
a. Cabin 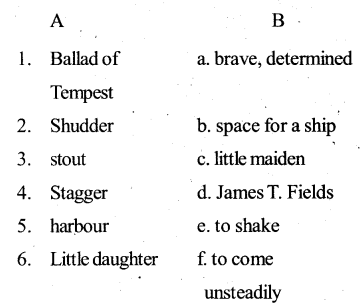 III. Give one word for the following:

Question 3.
A private room on a ship or boat.
Answer:
Cabin

Question 6.
A device of metal attached to a ship ‘ or boat by a cable and cast overboard to hold it in a particular place.
Answer:
Anchor

Answer the following questions in 2-3 sentences each:

Answer the following questions in 6-8 sentences each:

Question 1.
What is a ballad? What features of a ballad do you see in this poem?
Answer:
A ballad is a long narrative poem set to music. A story or an incident is narrated in a ballad. Ballads are known for the simple language employed and mental pictures or images created. Usual figures of speech and stock phrases are used. We see that in the poem, the poet narrates the fearful incidents of one night and makes the narration descriptive with mental imagery. Although it is a poem revolving around the emotion of fear, there is an easy rhythmic flow which makes the poem musical.

Read the following extracts and answer the questions given below them:

Question 2.
“Isn’t God upon the ocean,
Just the same as on the land?”
a) Who asked the question? OR Who is the speaker?
b) Why does the speaker say this?
c) What effect did it have on the sailors? OR How does the statement have an impact on others?
d) How does the poet highlight the power of faith through these lines?
Answer:
a) The captain’s daughter.
b) She said so because the captain said that they were lost and declared his fears about their safety.
c) On hearing the little girl, the despondent sailors cheered up, believing in the protective love of God towards them.
d) Though the sailors had been praying, they did not completely believe in their prayer and thought their end was near. But the faith of the little girl transformed them and they placed themselves fully in the care of God and were saved.

Question 3.
“Isn’t God upon the ocean Just the same as on the land.”
a) Who asked this question?
b) When did the speaker say so?
c) What does it mean?
Answer:
a) The captain’s little daughter.
b) When the captain was shouting desperately that they were lost.
c) It means that God is omnipresent and will protect his children on land and ocean. It is necessary that we submit ourselves to the complete care and protection of God and let His will have its way.

Question 4.
“We are lost”, shouted the captain.
a) Who does ‘we’ refer to?
b) Why did the speaker make the statement?
c) What reaction did the speaker get?
Answer:
a) The ship with its crew.

b) The crew is all crowded in the cabin as the sea is on storm and they think their end is near. They shudder at the thought of the hungry sea roaring in rage, ready to devour them all. The captain himself, having lost hope, announces that they are lost.

c) When the captain said so, his little daughter calmly took his hand and reminded him that the Lord, who protected his people on the land, will protect them out on the sea too. The little girl’s faith in God revived the faith of the sailors too and instead of growing more and more despondent, they grew hopeful and cheerful.

Ballad of the Tempest Poem Summary in English

“Ballad of the Tempest” was written by James Thomas Fields. Once a ship was caught by the violent storm. In this poem, the poet describes the situation and condition of the sailors. The poem is a ballad and it is one of the poet’s masterpiece. Here the speaker of the poem is the Sailor. Really voyage on the sea is an adventurous task. Here the poem starts in which the sailors had to face great danger. The ship was caught by the violent storm at midnight. All the sailors had crowded in the cabin.

Though it was midnight no one dared to sleep. All were frightened. The storm was very deep. It was fearful because it was winter season. The ship was to break apart by the gust of wind. The sailors heard the rattling sound of the trumpet and someone thundered to cut away the mast. All sailors were in silence out of fear. Even the strongest brave person had held his breath. The sea was roaring like a hungry lion. The large turbulent waves talked with death and moving towards the land. All were sitting in darkness.

Everyone was praying God for their safety. At that moment the captain shouted that they were lost When he was coming unsteadily down the stairs, his little daughter by her innocent heart whispered. She took her father’s cold hands and said that the God upon the ocean was the same as on land isn’t it? By hearing her talk all got some hope and prayed the God earnestly. All were kissed the little maiden. Suddenly the astonishing change occurs, and the sailors anchored the ship safely in harbour. The morning in the sky was shining very clearly. The danger which comes like a mountain could disappear like sand. Fortune favours the brave. God is everywhere but man has faith in him.

Ballad of the Tempest Poem Summary in Kannada 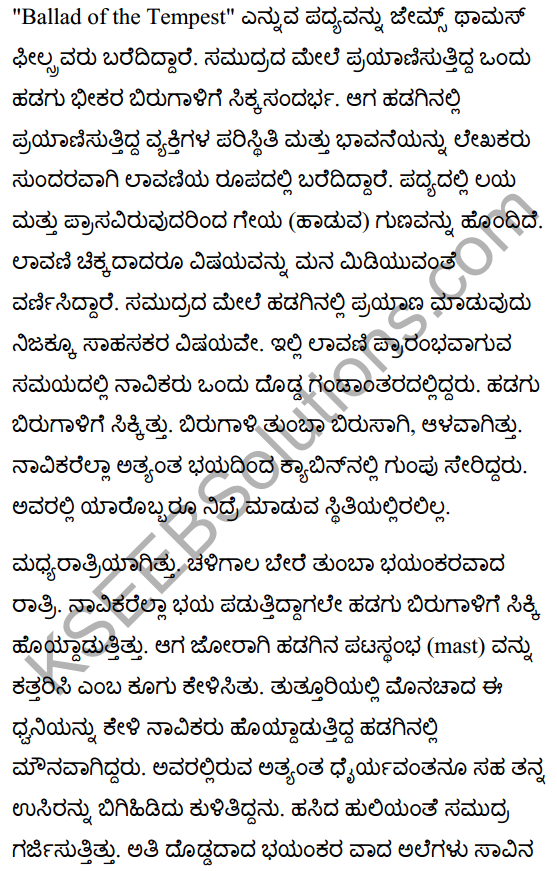 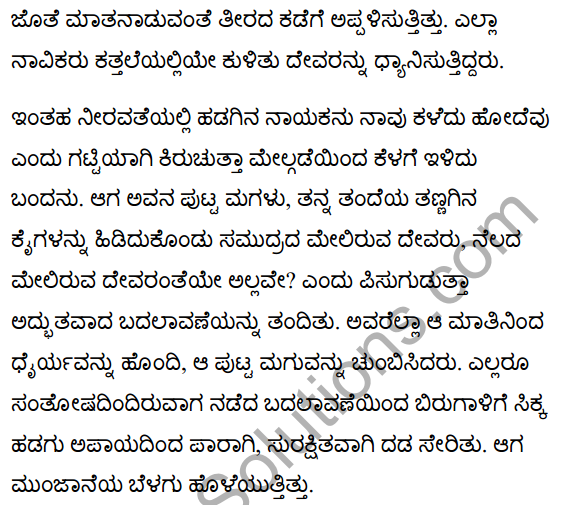 Hope all the information given regarding Karnataka Class 10 English Solutions Chapter 6 Ballad of the Tempest will help you to get good knowledge. For any queries, you can contact us and clear your doubts. Connect with us using the comment section. Also, we love your feedback and review. Get your Chapter Wise Karnataka Secondary Education Examination Board Class 10 Textbook Solutions for English PDF start learning for the exam.