Every chapter available in the KSEEB SSLC Class 10 English Solutions subject is explained clearly in an easy way. Learn the depth concept by referring to the Karna Questions and Answers Pdf, Notes, Summary Class 10 English Karnataka State Board Solutions. Have a look at every topic and get the complete knowledge on the English subject. Just refer to Karnataka Class 10 English Supplementary Chapter 2 Karna pdf and have a grip on the total subject.

I. Answer briefly the following questions:

Question 2.
What did Duryodhana envy?
Answer:
Arjuna displayed superhuman skill with his weapons and this earned the wonder and admiration of the whole crowd assembled there. This scene made Duryodhana envious and hateful towards Arjuna.

Question 3.
How does the writer introduce the Kama to the assembly?
Answer:
The writer introduces the Kama in a very impressive manner. At the close of the day, there came suddenly from the entrance of the arena a sound, loud and compelling like thunder, the sound made by the slapping of mighty arms in challenge. All eyes turned in that direction. They saw enter through the crowd, which made way in awed silence, a godlike youth from whom light and power seemed to emanate. He was Kama.

Question 4.
What was the cause for Duryodhana’s exultation?
Answer:
after Arjuna’s exhibition of his superhuman skill with his weapons, with Drona’s permission, Kama, then and there, duplicated all Aijuna’s feats with careless ease. This made Duryodhana feel exulted.

Question 5.
How does Kama challenge Arjuna?
Answer:
Laughing is scorn, Kama says: “This arena is open to all, O Arjuna, and not to you alone. Might is the sanction of sovereignty and the law is based on it. But what is the use of mere talk which is the weapon of the weak ? Shoot arrows instead of words.”

Question 7.
Why was Kunti stupefied?
Answer:
When Kunti saw Kama, she recongized him as her first born, and now seeing him get ready to fight with her other son, Aijuna, she was stupefied with anguish not knowing how to stop the fight between brothers.

Question 9.
How did Duryodhana restore Karana’s honour?
Answer:
Duryodhana announced that he would crown Kama as the king of Anga. He obtained the assent of Bhisma and Dhritarashtra, performed all the necessary rites and invested Kama with the sovereigns of the Kingdom of Anga giving him the crown, jewels and other royal insignia.

Question 10.
How does Bhima ridicule Kama?
Answer:
On seeing the charioteer call Kama his son, Bhima roared with laughter and said : “O he is after all only the son of a charioteer! Take up the driving whip then as befits thy parentage. Thou art not worthy of death at the hands of Aijuna. Nor should thou reign in Anga as a king.”

Question 11.
How does Duryodhana defend Karna against Bhima’s accusations?
Answer:
Duryodhana admonishes Bhima for speaking so contemptuously about Karna. He says that great heroes and mighty rivers should not be traced to their sources, and points out that there might be awkward questions about Bhima’s origin also. He points to Kama’s godlike form and bearing, his armour and earrings, and his skill with weapons, and says that he has to be of a noble birth, and is definitely worthy to rule the whole world.

Question 12.
How and why did Indra approach Karna?
Answer:
Indra foresaw that a supreme contest was inevitable between his son Arjuna and Karna; and he put on the garb of a Brahman and came to Karna, who was reputed for his charity, and begged of him his earrings and armour.

Question 13.
a) Why couldn’t Karna refuse the gift asked of him?
Answer:
Karna could not bring himself to refuse any gift that was asked of him.

b) What does this tell us about Kama’s character?
Answer:
This tells us that Kama is a very kind and dignified person who will not deny anyone anything.

Question 14.
Why does Indra offer a boon to Karna? What is the boon?
Answer:
Indra was filled with surprise and joy when Karna cut off his earrings and armour with which he was born and gave them to him. In return, he told Karna to ask for a boon. As Kama desired to et Indra’s weapon, the Sakti, Indra granted the boon.

Question 15.
Indra granted the boon with a condition. What was the condition?
Answer:
Indra said that Karna could use the Sakti weapon only against one enemy, and it would kill him whosoever he might be. But after this killing was over, the weapon would no longer be available to him. Instead, it would go back to Indra.

Question 16.
How did Parasurama realise that Karna was not a Brahmana?
Answer:
When Parasurama was reclining on Kama’s lap, a stinging worm burrowed into Kama’s thigh. Blood began to flow and the pain was terrible, but Karna bore it without tremor for fear that the master’s sleep should be disturbed. When Parasurama awoke and saw the blood flowing from the wound, he said : “Dear pupil, you are not a brahamana. A Kshatriya alone can remain unmoved under all bodily torments.”

Question 17.
What was Parasurama’s curse?
Answer:
Parasurama curses Kama that, as he had deceived his guru, the Brahmastra that he had learnt from the Guru shall fail him at the fated moment. Karna would be unable to recall the invocatory mantra when his hour comes.

Question 18.
What does Bhishma ask Karna to do?
Answer:
Bhishma asks Karna to befriend the Pandavas, since that was the right path for Karna who was their brother.

Question 19.
What does Karna say about his loyalty to Duryodhana?
Answer:
Kama says that he has eaten 1 Duryodhana’s salt and so must be true to him, to be true to his own lineage. He says that Bhishma should permit, Karna ) to repay with his life the debt he owes to . Duryodhana for his love and trust.

Question 20.
How does Lord Krishna save Aijuna from Kama’s arrow?
Answer:
Lord Krishna, who was Aijuna’s charioteer, at the nick of time, pressed the vehicle down five fingers deep in the mud, so that the serpent shaft just missed Aijuria’s head but struck off his helmet.

Question 21.
What mishap happened to Kama’s chariot?
Answer:
The left wheel of Kama’s chariot suddenly sank in the blood mire, and would not allow the chariot to move.

Question 22.
When Karna appeals to Arjuna’s sense of dharma Lord Krishna recounts many acts of Kama and the Kauravas which violated fair play and chivalry. Pick out any 3 such acts.
Answer:

Question 23.
a) What Nvas Kama’s response to Lord Krishna’s denouncement ?
Answer:
When Krishna was denouncing him, Kama bent his head in shame and uttered not a word.

b) What does this tell you about Kama?
Answer:
It tells us that Kama was not truly wicked, but was forced by his gratitude and loyalty to Duryodhana to assist him in all his wicked deeds. ‘

Question 24.
Why was Arjuna’s mind wavering when Lord Krishna asked him to slay Kama?
Answer:
Lord Krishna urged Arjuna to kill Kama when he was vainly trying to raise his chariot out of the mud in which it had stuck. According to the code of honour and laws of war prevailing then, it was wholly wrong to attack such a warrior. Hence Arjuna’s mind wavered.

Question 26.
How does the poet justify this wrong?
Answer:
The poet does not have the heart to impute this act of Arjuna who was the embodiment of nobility. It was Lord Krishna who had incited Arjuna to kill Kama when he was not ready for the fight. Except for the Lord Himself, no one could bear the responsibility for breaches of dharma.

II. Discuss in pairs and answer the following questions.

Question 1.
Kama is easily one of the most tragic and compelling characters of the epic. List any 5 great qualities of Kama which you admire most. Justify your choice of qualities.
Answer: 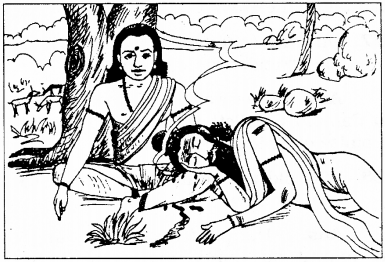 The Pandavas and the Kauravas learnt the practice of arms both from Kripacharya and Dronacharya.

A day was fixed for the test and the public was also invited to witness it.

Arjuna showed his skills with weapons and Duryodhana got jealousy of him. At the close of the day, a youth entered and challenged Arjuna.
Kripacharya, who knew the rules of single combat, told Kama that only a high-born prince can fight him.

On hearing this, Kama bent down his head but Duryodhana immediately^ crowned him as the King of Anga. ’

The combat was interrupted by the entry of Adhiratha, Kama’s foster father and Duryodhana drove away Karna in his chariot.

Indra, on the other hand, realised the gravity of the situation and put on the garb of a Brahman to ask Karna for his earrings and armour in charity. Despite Sun God’s warning to Karna, he cut off both the things and gave them to the Brahmana.

Indra became happy and bade Karna to ask for any boon he wanted. Karna asked for the weapon (Sakti) which had the power to kill enemies and his wish was granted.

Karna became the disciple of Parasuram. He learnt from his the mantra for using Brahmastra.

Once Karna told a lie to his guru that he was a Brahmana. When the truth came out, Parasuram got angry and cursed him saying that the Brahmastra would fail him at a crucial moment.

Before going for the battle karna went to Bhishma for his blessings and he got it from him.

Then started the great battle with Karna fighting from Duryodhana’s side.

At one moment, the wheel of his chariot sunk five fingers deep in the mud.

Arjuna aimed at him and Karna was reminded of Parasurama’s curse.

Krishna also reminded him of all his bad deeds which he had done in the company of Duryodhana.

Karna bent his head in shame but again tried to take out the wheel from the mind.

Arjuna’s mind was wavering but Krishna told him to severe the head of Karna which he did.

Thus, ended the life-story of a brave warrior. 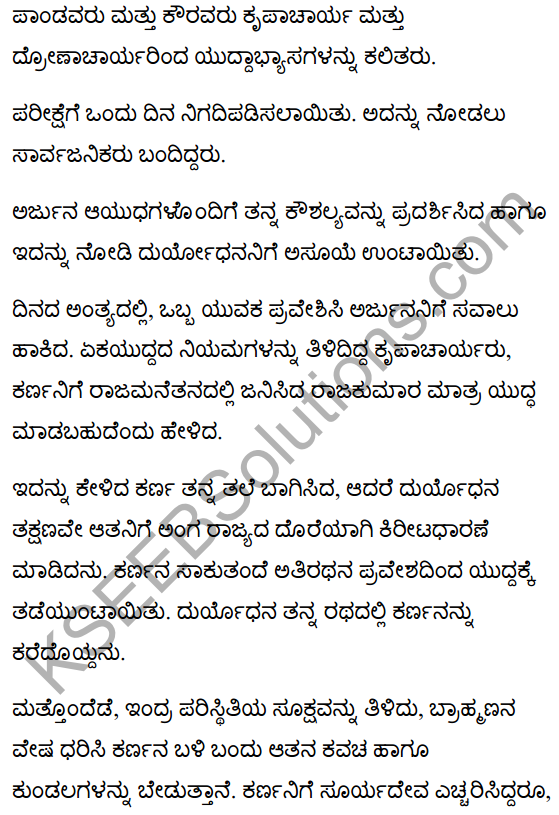 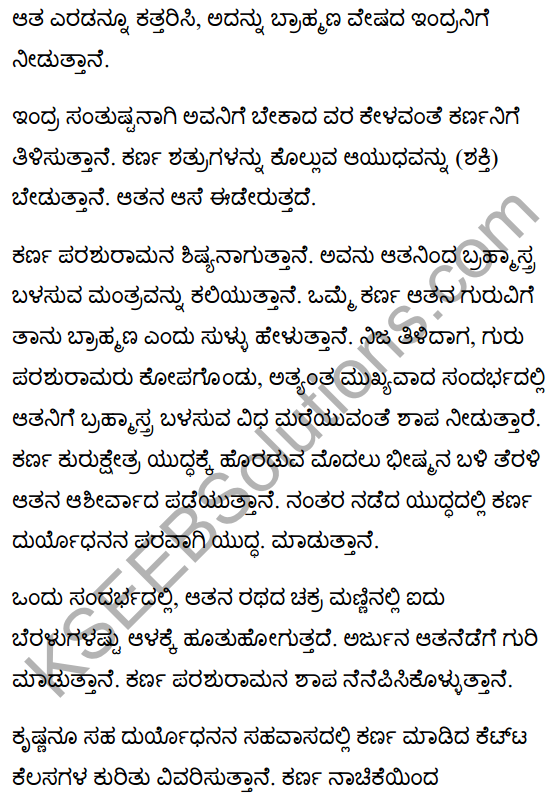 Hope all the information given regarding Karnataka Class 10 English Chapter 2 Karna will help you to get good knowledge. For any queries, you can contact us and clear your doubts. Connect with us using the comment section. Also, we love your feedback and review. Get your Chapter Wise Karnataka Secondary Education Examination Board Class 10 Textbook Solutions for English PDF start learning for the exam.