Ulysses and the Cyclops Questions and Answers, Notes, Summary

I. Answer briefly the following questions

Ulysses And The Cyclops KSEEB Solutions Class 10 Question 1.
Who were Cyclops?
Answer:
The cyclops were giant shepherds who lived on the steep heads of mountains in caves.

Ulysses And The Cyclops Notes KSEEB Solutions Class 10 Question 2.
Pick any 5 details to show that they were not civilized.
Answer:
The Cyclops neither sowed nor ploughed, but the earth untilled produced for them rich wheat and barley and grapes. They had neither bread nor wine, nor did they know the arts of cultivation, not cared to know them.

They lived each man to himself, without laws or government or anything like a state or kingdom. Their dwellings were in caves on the steep heads of mountains, every man’s household governed by his own caprice or not governed at all. They did not have any ships or boats, no trade or commerce or wish to visit other shores.

Ulysses And The Cyclops Questions And Answers KSEEB Solutions Class 10 Question 3.
Why did Ulysses and his men enter the habitation of the Cyclop?
Answer:
Ulysses, with Chosen party of twelve followers, landed, to explore what sort of men dwelt there, whether hospitable or friendly to strangers or altogether wild and savage.

Ulysses And The Cyclops Summary KSEEB Solutions Class 10 Question 4.
How strong was the Greek wine?
Answer:
The Greek wine was so strong that no one ever drank it without an infusion of twenty parts of water to one wine, yet the fragrance of it even then so delicious, that it would have vexed a man who smelled it to abstain from tasting it; but whoever tasted it, it was able to raise his courage to the height of heroic deeds.

Ulysses And Cyclops KSEEB Solutions Class 10 Question 5.
How did Ulysses introduce himself and his group to the Cyclop?
Answer:
Ulysses said that they came neither for plunder, nor business, but were Grecians, who had lost their way, returning from Troy. He added that they acknowledged him to be mightier than them, and hence prostrated themselves humbly before his feet.

Ulysses And The Cyclops Class 10 Notes KSEEB Solutions Question 6.
What horrid response did the Cyclop give to Ulysses; request for hospitality?
Answer:
The cyclop replied nothing, but gripping two of the nearest of Ulysses’ followers as if they had been no more than children, he dashed their brains out against the earth, and tore in pieces their limbs, and devoured them, yet warm and trembling, making a lion’s meal of them lapping the blood.

Ulysses And The Cyclops Summary Class 10 KSEEB Solutions Question 7.
What prevented Ulysses from attacking the Cyclop with his sword?
Answer:
When the Cyclop slept among his goats, Ulysses wanted to draw his sword and thrust it with all his might into the bosom of the sleeping monster; but wiser thought restrained him because he realized that he would need Polyphemus alive as only he could have removed the mass of stone which he had placed to guard the entrance.

Ulysses And Cyclops Notes KSEEB Solutions Class 10 Question 8.
How did Ulysses prove that “manly wisdom excels brutish force’?
Answer:
Ulysses hatched a plot to incapacitate the Cyclop and escape from the cave alive. He chose a stake from among the wood which the Cyclop had piled up for firing, in length and thickness like a mast, which he sharpened, and hardened in the fire; and selected four men, and instructed them what they should do with his stake and made them perfect in their parts.

Ulysses And The Cyclops Notes Pdf KSEEB Solutions Class 10 Question 9.
What ‘gift’ does the Cyclop offer Ulysses in return for the wine?
Answer:
The Cyclop took the wine and drank it, and vehemently enjoyed the taste of wine, which was new to him, and swilled gain at the flagon, and entreated for more; and prayed Ulysses to tell him his name, that he might bestow a gift upon the man who had given him such brave liquor. When Ulysses says that this name is Noman, the Cyclop promises Ulysses that he will eat him after he has eaten all of Ulysses’ friends.

Ulysses And Cyclops Summary KSEEB Solutions Class 10 Question 10.
How do the brave Greeks blinden the Cyclop?
Answer:
Ulysses waited for some time while the Cyclop lay insensible; and heartening up his men, they placed the sharp end of the stake in the fire till it was heated red-hot; and the four men with difficulty bored the sharp end of the huge stake, which they heated red-hot, right into the single eye of the drunken cannibal.

Ulysses And The Cyclops KSEEB Solutions Class 10 Question 11.
Why didn’t the fellow Cyclops help Polyphemus when he cried out for help? •
Answer:
When the fellow Cyclops came flocking from all parts to inquire what trouped Polyphemus, Polyphemus answered from within the cave that Noman had hurt him and Noman was with him in the cave. The other Cyclops thought that Polyphemus was alone in the cave ‘and no one had hurt him but he himself. So they went away, thinking that some disease troubled him.

Ulysses And The Cyclops Questions And Answers Pdf KSEEB Solutions Class 10 Question 12.
How did Ulysses help his men escape from the cave?
Answer:
Ulysses made knots of osier twigs upon which the Cyclop, commonly slept, with which he tied the fattest and fleeciest of the rams together, three in a rank; and under the middle ram he tied a man. Thus the man could escape from the cave along with the ram which was moving towards its accustomed pasture.

Question 13.
How did Ulysses himself escape from the cave?
Answer:
Ulysses wrapped himself fast with both his hand in the rich wool of a ram, the fairest of the flock. As the sheep passed the doorway of the cave, the Cyclop who was sitting there at the threshold, felt the back of those fleecy wools, without realizing that they carried his enemies under them. When the last ram came with Ulysses under it, the Cyclop stopped the ram and felt it, and had his hand once in the hair of Ulysses, but did not recognize it.

Question 14.
How did Ulysses introduce himself to the Cyclop at the end of the story?
Answer:
Ulysses introduced himself as ‘Ulysses, son of Laertes; he was called the King of Ithaca and a waster of cities’.

II. Do you remember any story from our own epics where the hero destroys a wicked giant? Narrate the story to the class.
Answer:
The stories of Bhima killing Bakasura, or Shri Krishna killing Putini can be narrated.

Ulysses and the Cyclops summary in English 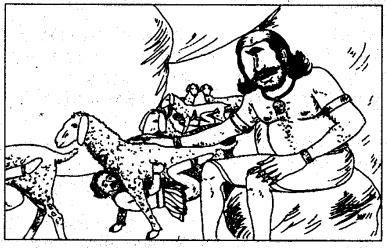 Ulysses was the son of Laertes, the King of the Island of Ithaca in Greece.

After the Trojan war, he embarked to return home. On his’ way back, he reached a giant’s cave which was rudely fashioned. The owner was not present in the cave. He and his men stayed there the whole day when suddenly they heard a thundering sound.

The owner, a Cyclop, had come back after gazing his sheep and goats. The Grecians hid themselves in the remote parts of the cave and started waiting for Polyphemus, a one-eyed Cyclop.

The Cyclop entered the cave with all his female sheep and goats and closed the mouth of a cave with a huge stone.

Then he started rifilking his flock of sheep and goats. Diiring this he saw some of Ulysses’ men hiding in the cave. He took hold of two of them, smashed their heads and ate them since he was a cannibal. Then he went to sleep.

Ulysses wanted to kill him at that moment but realised that the stone was too huge to be moved by any of his men.

The next day, Polyphemus again went out with his sheep and closed the mouth of the cave with the stone.

Ulysses took advantage of this time- and made some preparations to tackle the Cyclop.

In the evening when Polyphemus cam back, he served him wine which he enjoyed. But soon the wirte had its effect and the giant reeled on the floor and sank into a deep sleep.

Ulysses was waiting for this time. He, with the help of his four men, blinded the monster with a burning stake. The monster cried loudly. Many of the villagers living nearby came and asked what had happened. The monster replied that no man (Noman – the false name which Ulysses had told him) had hurt him. All of them went back.

Then Ulysses tied all of his men under the sheep’s goats. When the monster opened the cave-door next morning to take out his flock, all the Gracious who were tied to them, came out of the cave and were thus saved

Ulysses and the Cyclops summary in Kannada 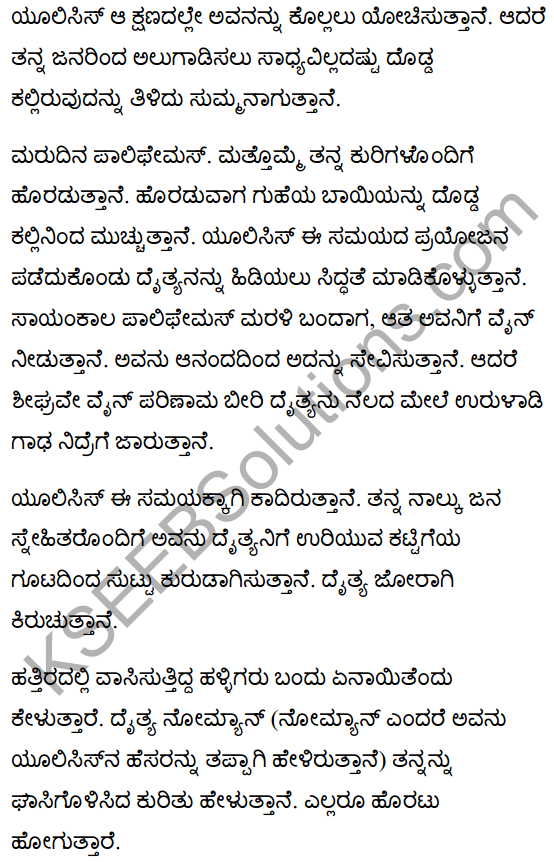 Hope all the information given regarding Karnataka Class 10 English Chapter 3 Ulysses and the Cyclops will help you to get good knowledge. For any queries, you can contact us and clear your doubts. Connect with us using the comment section. Also, we love your feedback and review. Get your Chapter Wise Karnataka Secondary Education Examination Board Class 10 Textbook Solutions for English PDF start learning for the exam.