I. Answer each of the following questions in a sentence or two.

Question 4.
Why do you think lal Bahadur refused to stay at home even during the days of parole?
Answer:
Lal Bahadur Shastry was a highly principled and honest man. According to him, the parole was for the sake of his daughter. But she was dead. So, it was not right for him to stay back and he went back to the prison.

Question 6.
How did he respond to the Pakistan’s attack.
Answer:
Shastry declared in the parliament “Force will be meet with force.” He gave the army to take action against Pakistan and teach it a lesson. Indian army entered Pakistan and won the war.

II. Answer each of the following in a paragraph of 10-12 sentences.

Question 1.
Give an account of Lal Bahadur’s education.
Answer:
Lal Bahadur had his school education at Mughal Sarai. After his school education, he went to Varanasi and joined Kashi Vidyapita and studied there for four years. As a student, he was very bright in subjects like philosophy, economics, political science and social science. He had to walk eight miles each way. He was so poor that he could not buy a bicycle. He got the degree “Shastry” while he was studying at Kashi Vidyapita. He had to lead a hard life as a student. His monthly expenditure was just two and half rupees.

Question 2.
Narrate any one incident from Lal Bahadur’s life which highlights his honesty?
Answer:
During freedom movement Lal Bahadur was in prison. He got the message that his daughter had contracted small pox, a dreadful killer in those days. He was anxious for his daughter. He sought the permission of the prison authority to see his ailing daughter. The Government agreed to release, on parole for 15 days on condition that he should not take part in any political agitation. He asked Government firmly to release him on parole without any condition.

Government agreed and released him. He came home. But, unfortunately, his daughter died the same day. He performed her last rites. He still had three or four days of his parole left, but he went back to prison though his family pleaded with him stay at home. This incident shows the honesty of Lal Bahadur Shastry.

Question 3.
Imagine you are supposed to speak on the life of Lal Bahadur Shastry and you are given not more than 3 minutes for your Speech. Note down the points based on which you can develop your talk.
Lal Bahadur’s sincerity :
Answer:
(a) With the mango seller
(b) his resignation …………….

I. Four alternatives are given below each question. Choose the correct one:

Question 3.
Lal Bahadur got this degree while he was studying at Kashi Vidyapita
(a) M.A.
(b) D. Lit
(c) Shastry
(d) P.hd
Answer:
(c) Shastry

Question 8.
As a railway minister, Lal Bahadur was travelling in
(a) his own car
(b) bus
(c) first class railway
(d) second class railway
Answer:
(b) bus

Question 10.
La Bahadur announced that would continue to be an associate official language of India.
(a) Hindi
(b) Sanskrit
(c) English
(d) Kannada
Answer:
(c) English

Question 1.
When and where did Lal Bahadur born?
Answer:
Lal Bahadur was born on October 2,1904 at Mughal Sarai.

Question 2.
Who were his parents?
Answer:
His parents were Sharada Prasad and Dulari Devi.

Question 3.
What were the special characters of Lal Bahadur as a boy?
Answer:
As a boy, Lal Bahadur was brave, kind and full of courage and vitality.

Question 4.
Why did Lal Bahadur give one anna even before the vendor completed his counting of mangoes?
Answer:
A hundred mangoes for an anna was too cheap. Vendor was prepared to suffer a loss because it was getting dark. It was hard on him. So Lal Bahadur gave the vendor one anna after he had counted fifty mangoes only, and took only that many.

Question 5.
What did “Shastry” refer?
Answer:
Shastry was a degree got by Lal Bahadur given by Kashi Vidyapita.

Question 6.
What were the facilities provided in railway by Lal Bahadur?
Answer:
He made a lot of efforts to reduce the vast difference between the first class and last classes. He provided more facilities to the travellers in the third class compartments. It was during his time that electric fans were provided in the third class compartments. He also worked hard to improve the management of Railways and to eliminate thefts on the trains.

Question 7.
How can we say that Shastry was very simple in his life?
Answer:
As a railway minister, he travelled by second class only. When he served as the home minister, he had no home of his own. When there was scarcity of food in the country, he asked the people to eat less. He and his family members ate only one meal a day. Even as prime minister, he did not have a car of his own.

Just to please his wife and children, he bought a small car, taking loan from the Government. He adopted simple living. Even after becoming a minister, he had not appointed a cook as he had no money to pay for the cook.

The story of one of the great sons of India is told in this lesson. Lal Bahadur who never aspired for power became the Prime Minister of India, after Nehru.

Lal Bahadur was born on October 2, 1904. His parents were Sharada Prasad and Dulari Devi. As a boy, Lal Bahadur was brave, kind and full of courage and vitality. Once, a vendor was ready to sell 100 mangoes for on’e anna as it was getting dark. Lal Bahadur purchased 50 mangoes and gave him one anna. He did not want the vendor to suffer loss. This shows his kindness.

After his school education, he joined Kashi Vidyapita at Varanasi and studied there for four years. He was too poor to buy a bicycle, so had to walk eight miles each way to college. He lead a very hard life. He got the degree ‘Shastry’, while he was studying at Kashi Vidyapita.

After his education, he joined the Indian National Congress and participated in the Non-Cooperation Movement and Dandi March. He served the country in various capacities as a Railway Minister, Home Minister and the Prime Minister.

Before Independence, once Lal Bahadur was in prison. He was released on parole for fifteen days to see his ailing daughter. Unfortunately his daughter died on the same day when he came home. He performed the rituals and returned to prison as he still he had four days of the parole. It shows his honesty.

As a Railway Minister, he provided many facilities in railways, specially to the travellers in the third class compartments. He also worked hard to improve the management of railway and to eliminate thefts on the trains.

Lal Bahadur lead very simple life. As the Railway Minister, he travelled by the second class. Though he was Home Minister, he had no home of his own. When there was scarcity of food in the country he asked his people to eat less.

He and his family members ate only one meal at a day. Even as Prime Minister, he did not have a car of his own. He bought a small car for his sons, taking loan from the Government. He did not appoint a cook in his home as he had not enough money to pay for the cook.

Lal Bahadur was strong in mind and action. He was tactful and firm. He showed that he could take bold decisions. He abolished the control on cement and steel.

When Pakistan attacked Jammu and Kashmir, he gave freedom to the army to take action against Pakistan and teach it a lesson. Indian Army entered Pakistan and won the war. Pakistan learnt a lesson it could never forget. 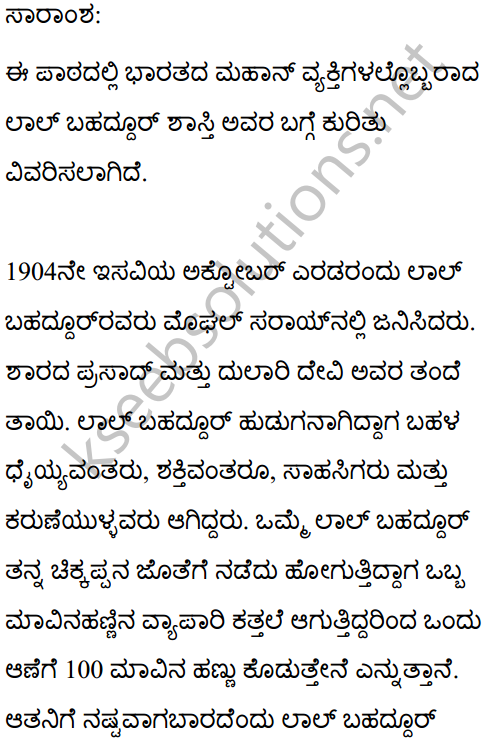 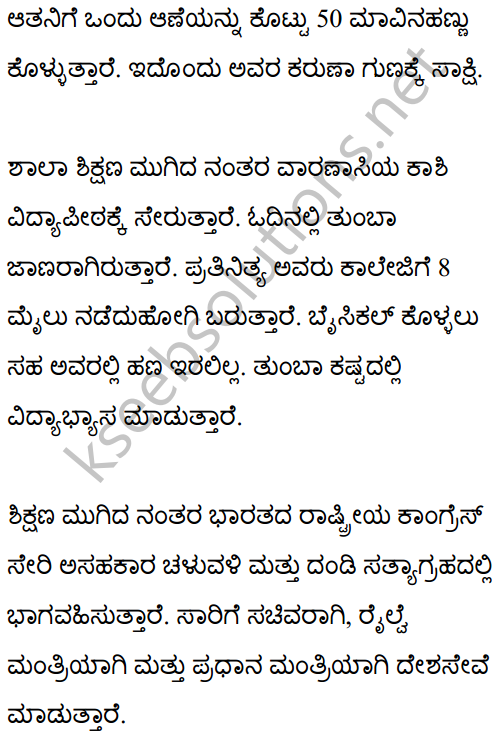 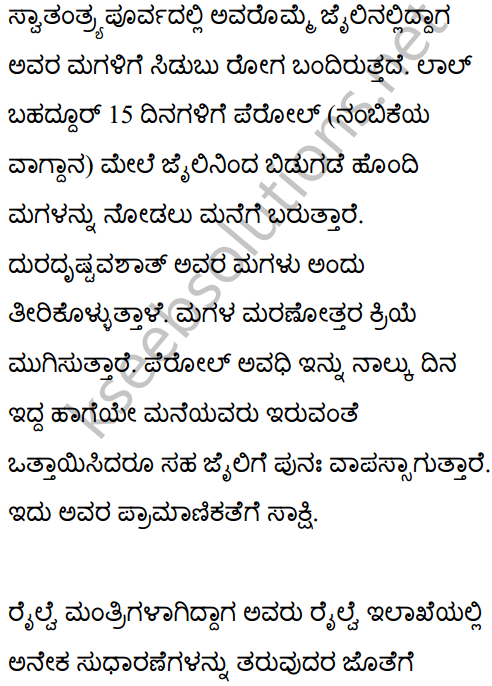 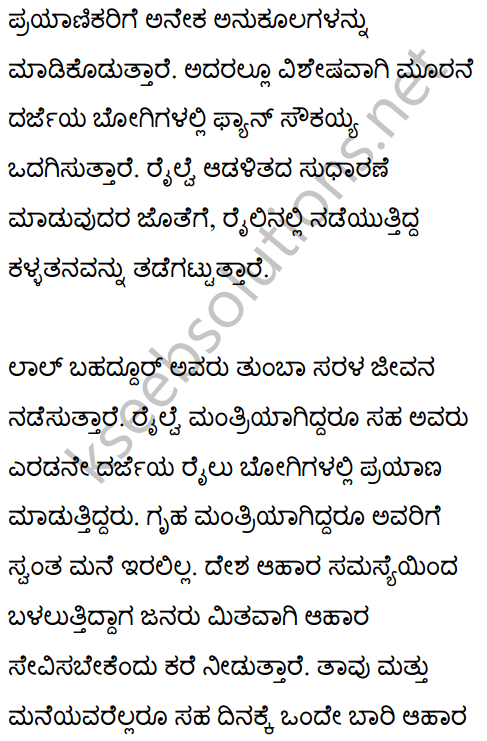 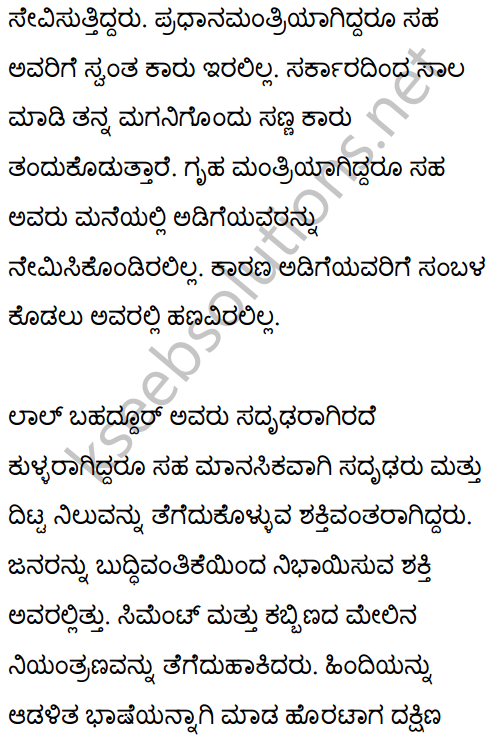 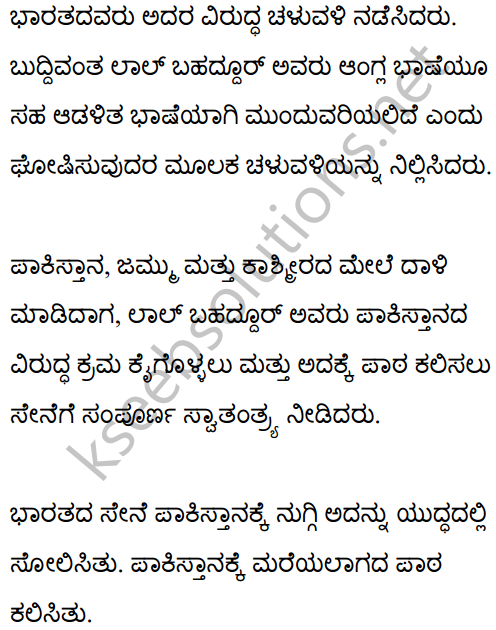