On Top of the World Lesson Summary in English and Kannada

On Top of the World Lesson Summary in English

In this article, Dicky Dolma narrates her saga of adventure. She climbed Mt. Everest on May 10, 1993 and became the youngest woman in the world to have achieved the awesome feat of scaling the world’s highest peak. The whole article is in the first person narrative. In the end, we find her message for the youngsters to take up adventure sports, if they wish to go for it. We find her adventurous story.

Dicky Dolma was born and brought up in Palchan, Himachal Pradesh. She faced a lot of hardships in her life. She lost her mother when she was eleven years old. Then she lost her elder brother. As a young girl, she was very much interested in skiing and participated in National level competitions and won lot of medals.

During her childhood, she was fascinated by the beauty of snow-covered peaks of the Himalayas. When she woke up, she used to find the beautiful mountain peaks. So she developed a desire to take to mountaineering. She joined the institute at Manali and worked hard and she had the support and encouragement of the members of the family and friends. She secured ‘A’ grade and her name was included in All-India Expedition to Mount Everest. She completed three successful expeditions.

Then she climbed Mount Everest on May 10, 1993. She was overwhelmed with joy, she was only 19 then. She felt that she had the whole world literally at her feet. She had all the most beautiful and delightful experience which was everything than the awards she received.

She worked hard with zest and zeal. She was not idler. She didn’t take back seat. She was not a shirker. She practiced everyday for four hours with hard work and dedication.

She had the grit to face for the hardships had taught her all the lessons. During her final frontier, the economic condition of her family was not encouraging. At the same time, her father was bed ridden and a lot of money was essential for his treatment. So she managed with the little money she got.

Dicky Dolma loved music and was fond of listening old Hindi film songs. Later she lost her father and at present she is teaching mountaineering at the Institute where she learnt. She is serving as coach.

On Top of the World Lesson Summary in Kannada 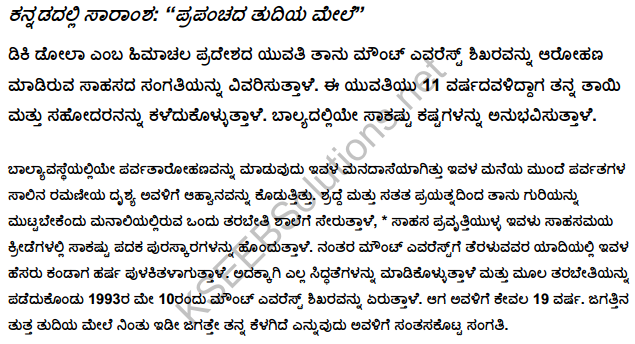 On Top of the World Lesson About the Author

Dicky Dolma scaled Mt. Everest in 1993 just when she was 19 and became the youngest woman to do so. Born and brought up in Himachal Pradesh, she made a ,concerted effort to reach the summit. Come, let us read this saga of adventure which she penned after that event.

On Top of the World Lesson Word Meanings