l. Answer the following questions and share your responses with your partner.

Question 1.
What kind of a woman do you find in this poem?
Answer:
We find an old, ragged, grey and kind Ans woman in this poem.

Question 3.
Why was the woman very anxious?
Answer:
The street was very busy, it was difficult for her to cross the road. No one took care of her. So she was anxious for somebody’s help.

Question 4.
What are the children compared to?
Answer:
Children are compared to a flock of sheep.

Question 6.
Why was the old woman hesitating to
Answer:
The street was full of people, carriages and horses riders. Street was slippery too. The old woman was so meek and timid. Hence, she was hesitating to cross the street.

II. Read and discuss your responses with your partner. Then wrIte.

Question 1.
How did the boy help the old woman?
Answer:
The boy told her that he would help her if she so wished. He held her hand so gently, and guided her to cross the road.

Question 2.
What made the boy happy?
Answer:
The boy had helped an old woman to cross the street. This made him feel happy and content.

Question 3.
What did the boy tell his friends?
Answer:
The boy told his friends that she could be sombody’s mother. She was poor, old and slow. He hoped that some one would help his own mother also whenever she was in need of help and he was far away.

Question 4.
What did the old woman say in her prayers that night? Why?
Answer:
The old woman said in her prayer, ‘God be kind to the noble boy who is sombody’s son and pride and Joy’, because, the boy had helped her to cross the street. She felt happy with the kindness of the boy.

III. Answer the following as directed

Question 1.
Pick out the rhyming words in the poem, and read them aloud.
Rhyming Words
Answer:
table

b. Her aged hand on his strong young arm.
Answer:
Metaphor.

Question 1.
The woman was walking slowly because
a. she was old.
b. she was suffering from fever.
c. street was over crowded.
d. it was her practice to walk slowly.
Answer:
a. she was old.

II. Read the following extracts and answer the questions that follows:

c. How did he help her?
Answer:
He helped her to cross the street by holding her hand very gently.

Question 2.
‘She is somebody’s mother, you know”
a. Who said this?
Answer:
The boy who helped an old woman, said this.

b. Who was it said to?
Answer:
The boy said this to his friends.

c. Who was she?
Answer:
She was an old woman.

Question 3.
The prayer she said “God be kind to the noble boy”
a. Who prayed to God?
Answer:
The old woman prayed to God.

b. What did she pray?
Answer:
She prayed to God to be kind to the noble boy.

c. Why did she pray?
Answer:
She prayed because the boy had shown kindness to her and helped her to cross the street.

This narrative poem praises the kindness shown by a boy towards a poor woman.

An old woman was walking slowly along the road. She was bent because of the chill of the winter’s day. The street was wet with the recent snowfall.

After the school was over, a group of school boys came into the street like a flock of sheep. They were laughing, shouting and were happy.

They passed the old woman hurriedly on their way home. They did not offer a helping hand to her to cross the road. She was afraid to move on her own because of movement of the crowd, carriages and horses, and the slippery street. Another group of happy boys came there.

One of the boys paused beside her and asked her if she wanted any help to cross the road. He held her hand very gently. He guided her across the road and returned to his friends. He was very – happy and satisfied with his work.

The boy told his friends about the old woman. He said that she could be somebody’s mother. She was poor and old. He hoped that some one would help his mother also whenever she was in, need of help and her son was far away.

The old lady felt proud of that boy. She prayed to God to be kind to the noble boy, who was somebody’s son. 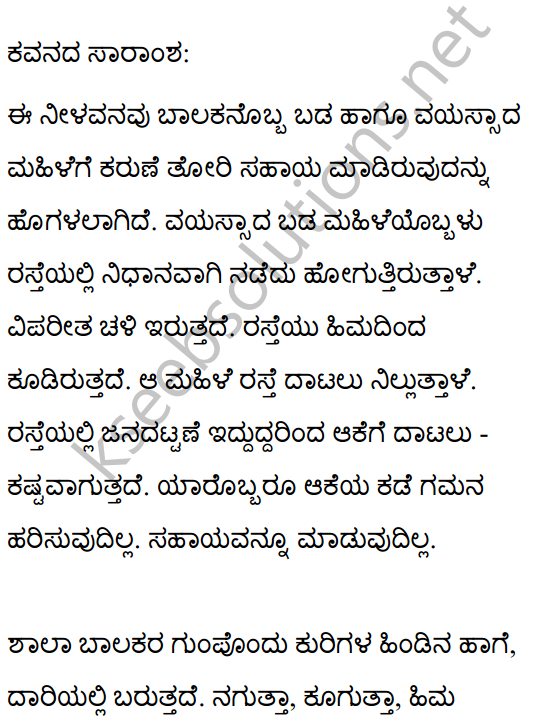 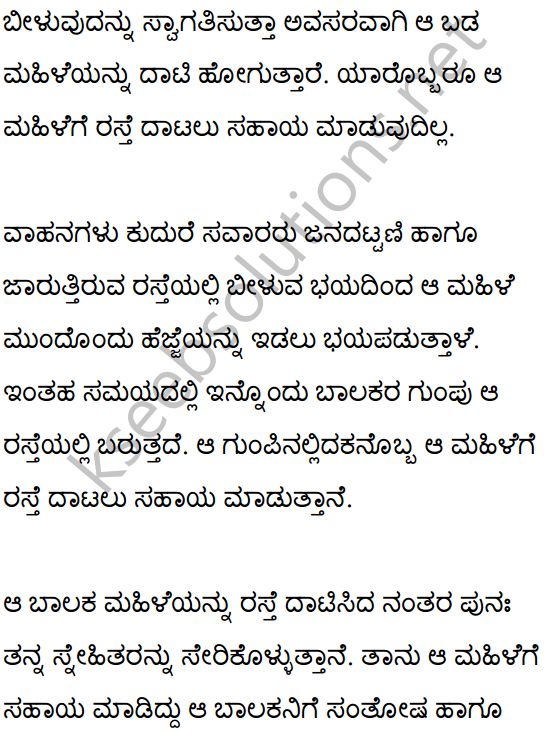 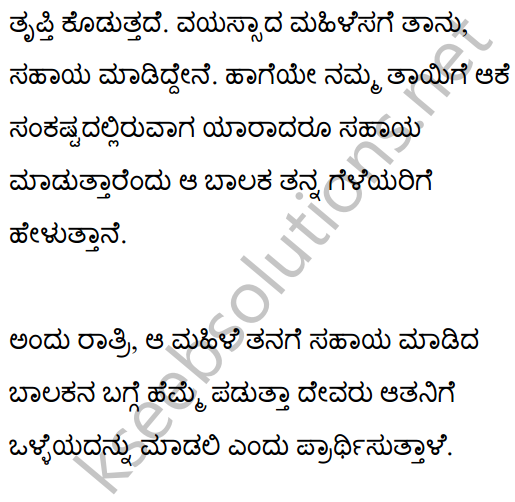