The Bird of Happiness Lesson Summary in English and Kannada

The Bird of Happiness Lesson Summary in English

An area in Tibet had no natural resources and there was no trees or even green grass. It resulted or caused many problems. The people of this area suffered from hunger and cold. The word “Happiness” was not known to the people. Yet they believed that this happiness existed somewhere in the world and longed to find it.

The old folk believed that happiness was a beautiful bird living on a snowy mountain far, far away in the east. They might find this happiness wherever the bird flew. So some people went in search of this bird but in vain. The people believed that this bird of Happiness was guarded by three old monsters who were very powerful. They could destroy the people by simply blowing through their long beards.

Wangjia was a bright and courageous boy of this area. He was sent to find the bird of happiness. The girl of the village offered barely wine and the mothers spread barely grains on his head. Wangjia set out to the East for many days and found a large mountain. There he saw an old monster with black beard.

He asked the boy crying like a crow how he dared to come there. The boy replied that he wanted to look for the bird of paradise. Then the monster told him that if he wanted the bird he must kill Lousang’s mother but the boy (Wangjia) refused. So he was made to walk 900 miles.

The Monster blew his beard and the smooth road became a vast scree. Every stone was as sharp as knife. It was very difficult for Wangjia to walk though his boots were ripped, his feet were cut to pieces, his hands were torn to shreds, yet he was bold enough to face. He remembered his people and they were waiting for his return with the bird of happiness. It gave him a lot of Courage. He lay on the ground and crawled. He didn’t mind his clothes and injuries and completed his journey.

Then he found another monster with a brown beard. The monster told Wangjia to poison old gaffer silong. If not, he would starve him to death and did the same. Sangjia lost his bread bag and did not get water even. He controlled his hunger and the pain and completed his second journey. Then he found a river and drank water but he was reduced to skin and bone.

The third monster with a white beard told him to bring Bhima’s (a girl’s name) eyeballs. If not, he would gouge out his eye balls. As usual, Wangjia refused to do the work of the monster and as a result of this, he lost his eye sight. Yet he didn’t lost hope and went on in the direction of the rising sun. He crawled 900 miles and heard the voice of the Bird of Happiness. When the bird spoke to him lovingly, he was overwhelmed with joy and requested the bird to go back with him.

The bird of happiness touched Wangjia gently with love and sang for him. As a result of this, Wangjia got back his eyes, his wounds healed, and he became stronger. He ate some dried meat and cake and the bird took him to a mountain top in his village. The bird gave three cries. At first the golden sun broke out, then forest appeared, flowers bloomed green rivers and fields came, the rabbits danced and the larks sang. Thus Wangjia put an end to the sufferings of the people with the help of the bird of happiness.

The Bird of Happiness Lesson Summary in Kannada 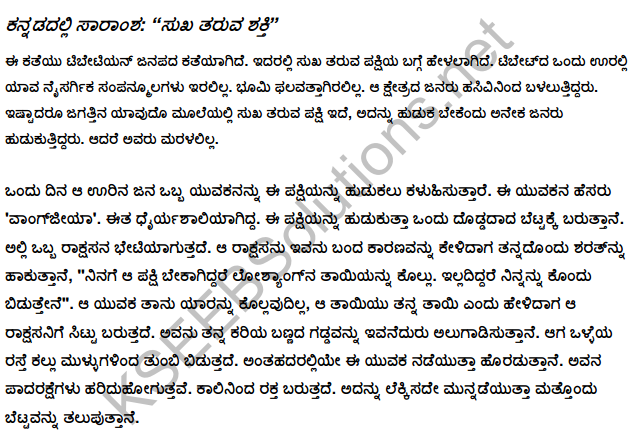 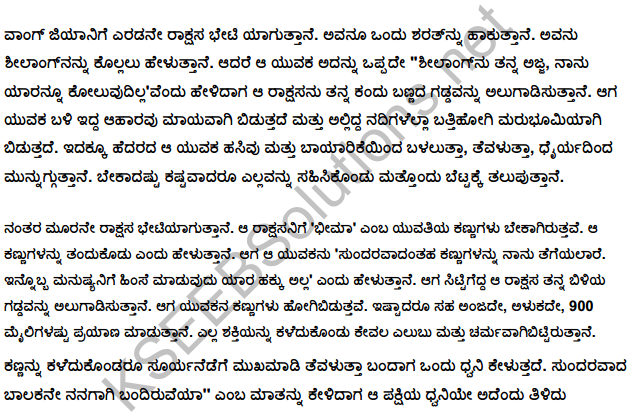 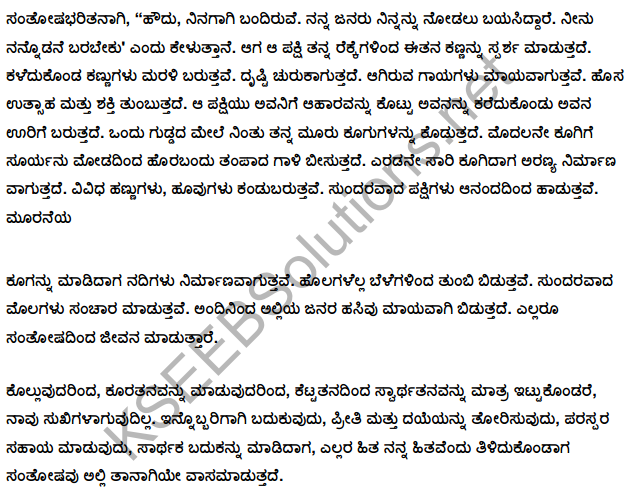 The Bird of Happiness Lesson About the Author

Liu Jude is a Chinese writer. He has compiled Tibetan Folk tales in English.