I. Answer each of the following in a sentence or two.

Question 6.
What was the command given by the lion to the animals at the end.
Answer:
The lion spoke to the animals that they need not have any fears. There was neither earthquake, nor any other calamity. Then he commanded them to go back to their places and live as they had before.

II. Write the answers for each of the following in about 50-60 words.

Question 1.
It is said: ‘The mob cannot think’ Do you agree? If so, how does this story illustrate that? If you do not agree with the statement. How do you explain the behaviour of the animals?
Answer:
Yes, I agree with the statement that mob cannot think sensibly sometime. Mob is moved by rumours. People believe rumours without thinking and create a lot of problems. An example for quoting this statement, few years back, some people spread rumour that the statue of Ganesha could drink milk. The whole nation was influenced by this rumour.

Later, some sensible people found out the causes. Two years back there was another rumour spread that earth would collapse in the year of 2012. Many people are afraid of this rumour about the end of the world, even today.

In this story also, a hare was worried that if the earth were to fall to pieces, what would become of him. He started to run when a bel fruit fell on the palm tree. Other hares also started to run behind him on listening to his words. Other animals also started to run without thinking. But a sensible lion, stopped them, found out the cause and set right the confusion.

Question 2.
Sum up what the lion did to verify the statement of the hare.
Answer:
Lion heard the statement of hare. After hearing the words of the hare, the lion thought to himself that may be a ripe bel fruit had fallen on the palm leaf and made the crash and the hare had thought that the earth was cracking up and had fled. The Lion decided to find out the reason.

He asked the hare to sit on his back and’ went to the place, where the hare had heard the terrible crash. Hare pointed to the exact place to the lion and stood far off. The Lion confirmed from hare that whether he had heard the crash sound only or had any other calamities.

He went towards the place under the palm leaves. Looking closely, he found that a ripe bel fruit, had fallen on top of the palm shrub. Now he understood everything. He also made sure that there was no sign of any earthquake nearby. Like this, the Lion verified the statement of the hare.

I. Four alternatives are given below each questions. choose the correct one:

Question 8.
The animal that decided to find out the truth of earthquake was
(a) tiger
(b) elephant
(c) lion
(d) rhinoceros
Answer:
(c) lion

Question 9.
Lion carried hare to the place where the hare had heard the crash sound,
(a) by dragging
(b) on his head
(c) on his back
(d) by biting the ear of the hare.
Answer:
(c) on his back

Question 1.
Where did the hare live?
Answer:
Hare lived under a small palm shrub at the foot of a bel tree near the western coast.

Question 2.
Why did the other animals start to flee?
Answer:
A hare started to run madly on hearing the crash sound of bel fruit. It thought that it was earthquake sound. Other hares asked him the reason of his running. He replied that the earth was falling to pieces behind him. Hares started to flee on hearing these words, then deer, boars, antelopes, buffaloes and other animals started to flee without asking and without thinking sensibly.

Question 3.
What command did the lion give the animals, first of all?
Answer:
Lion commanded the animals that he was going to find out the truth about the earthquake. He asked them to stay there only till he came back.

Question 4.
How did the hare react when he reached the crash place?
Answer:
Hare jumped off the lion’s back. He said nervously that he did not dare to go near the bel tree. Lion shouted at him to show the particular place. Then hare, not daring to go near the bel tree, stood some distance away and pointed out to the lion the spot where he had heard the terrible crash.

The Earthquake Lesson Summary in English

It is a folk tale. This story narrates the effects of insensible thinking and rumour spreading.

Once, there lived a hare under a small palm shrub at the foot of a bel tree. One day a strange fear struck him that if the earth were to fall to pieces, what would become of him. He thought and shivered. At the same moment, a big bel fruit fell on the palm shrub. Hare was afraid of that crash and being quite sure that the earth was indeed falling to pieces around him, he fled madly away without even looking behind.

Another hare that saw him fleeing, asked the reason of his running. The first hare did not answer. The other hare asked him repeatedly racing after him. Then he said that the earth was falling to pieces behind them. So the other hare also fled after him. In the same way, another saw him and yet another, until a hundred, thousand hares were all fleeing after him. Then a deer saw them, and a boar, an antelope, a buffalo, a gazelle, a rhinoceros, a tiger and an elephant all followed them.

When they all asked for the causes for running, the reply was that the earth was falling to pieces. So they all joined in the stampede, followed by the whole race of each species. In this way gradually, the line of animals stretched out over a distance of about three miles.

Lion enquired the hare about his dwelling place. Hare told all about his dwelling place and that he was living under a palm shrub at the foot of a bel tree and he heard the crash of earthquake and so had fled as fast as he could. Lion understood that a ripe bel fruit must have fallen on the palm leaf and made the crash. So he decided to clarify his doubt. He ordered all the animals to not to leave the place until he returned and asked the hare to sit on his back and went to the habitual place of the hare.

They reached the place where the hare had heard the earthquake sound. Hare jumped off the ‘ lion’s back. He did not dare to go near the bel tree. He stood far away and pointed out to the lion the spot where he had heard the terrible crash.

Lion went to the spot and looked closely and found that a ripe bel fruit had fallen on the top of the palm shrub. Lion understood everything and made sure that there was no sign of eqrthquake nearby. Then both the lion and hare returned. Lion spoke to the animals that there was no earthquake.

So they not have any fear. He advised them to go back and live happily. All the animals thanked the lion and went back to their habitats. In this way the brave and sensible lion found out the reason of the crash sound and stopped the animals from fleeing.

The Earthquake Lesson Summary in Kannada 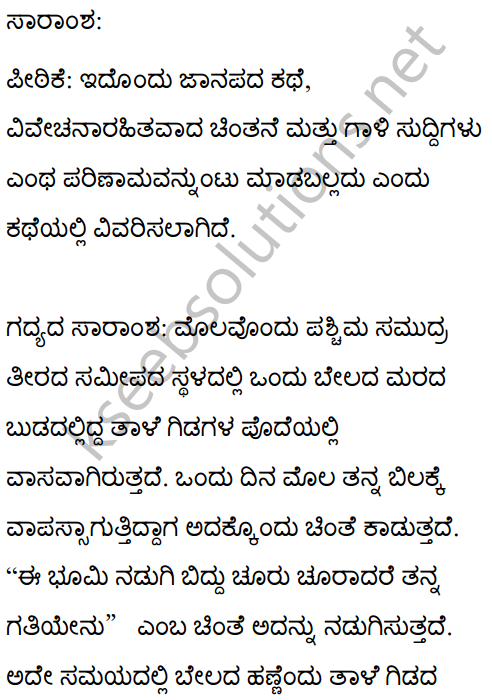 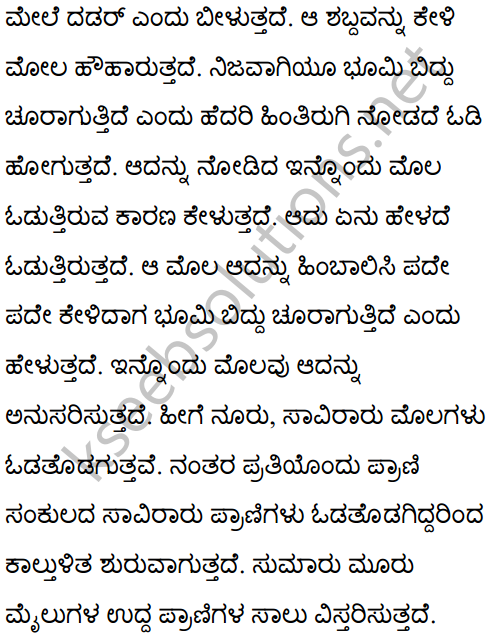 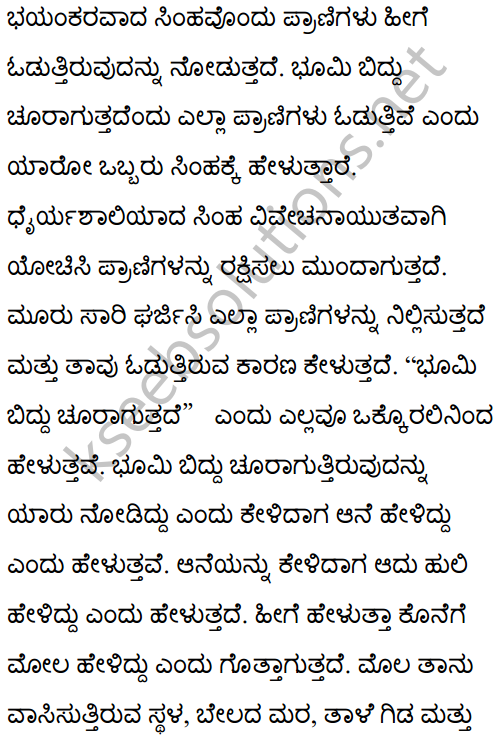 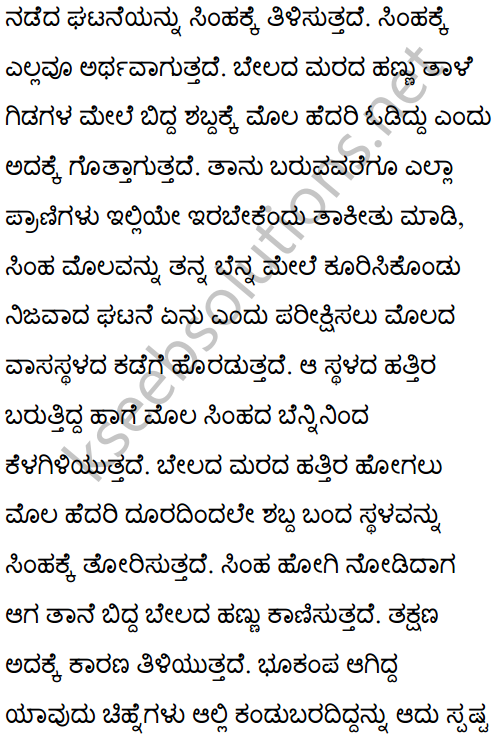 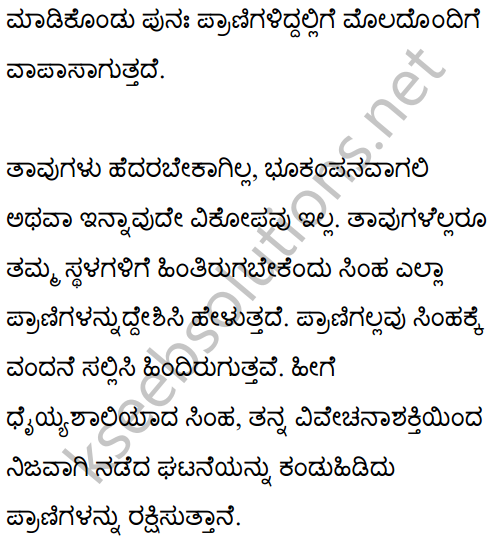 The Earthquake Lesson Word in English