I. What would your reaction be when a stranger speaks to you?
Answer:
I would be very uncomfortable to talk with strangers.

I. Comprehension Answer the following questions in two or three sentences each.

Question 1.
What was Arun doing all alone on the platform? Why?
Answer:
Arun was waiting for the north-bound train on the platform. He was alone because his parents felt that he, being 12 years old was big enough to travel on his own.

Question 3.
“Are you all alone, my son?” How did Arun react when he heard the voice of a stranger? Why?
Answer:
When Arun heard the voice of the stranger, he looked up to see who it was. He found a lady clad in a white saree, without any ornaments standing near him. She looked so dignified and commanded respect, that he stood up respectfully.

Question 4.
How did the bond between Arun and the stranger develop?
Answer:
During the course of the conversation that they had over tea, Arun felt so comfortable with her that he told her all about his school, friends, and his likes and dislikes. The women seemed to enjoy the way Arun was relishing his snacks and tea that it seemed to cement a bond between them.

Question 6.
Why did Arun say “I like strangers”?
Answer:
When Arun compared the two ladies standing near him, he found that the stranger was better and kinder than Satish’s mother. He had also developed an instinctive dislike for Satish’s mother. Therefore, he must have impulsively said that.

Question 7.
How did Satish and Arun react to the advice of Satish’s mother saying “Never talk to strangers”?
Answer:
Arun glared resentfully at her and moved closer to the woman in the white saree. Satish who was standing behind his mother, enjoyed the verbal clash between his friend and his mother.

Question 8.
What did Satish’s mother give and say to Satish as a parting advice?
Answer:
Satish’s mother gave him a bag of fruits, a cricket bat and a box of chocolates and advised him to share them with Arun. She also advised him not to stick his head out of the window and not to eat any rubbish on his way.

Question 10.
How did Arun repay the strange woman for her goodness?
Answer:
Arun expressed his gratitude to the kind woman by kissing her on her cheek.

II. Read the extract and answer the questions that follow:

(ii) What do you mean by the above sentence?
Answer:
It means that she encouraged him to talk freely.

(ii) What do you think is the reason behind the speaker saying so?
Answer:
She said the above sentence so that Arun wouldn’t be embarrassed to state that he was traveling alone.

Question 3.
“These days one has to be very careful of strangers”.
(i) Who said these words?
Answer:
Satish’s mother said those words.

(ii). Why did the speaker say so?
Answer:
Satish’s mother felt that all stangers were suspicious characters. Therefore she said the above sentence.

Question 1.
Mention three things that Arun liked about this woman.
Answer:
She was quiet, kind and gentle.

IV. Work in pairs and complete the table: 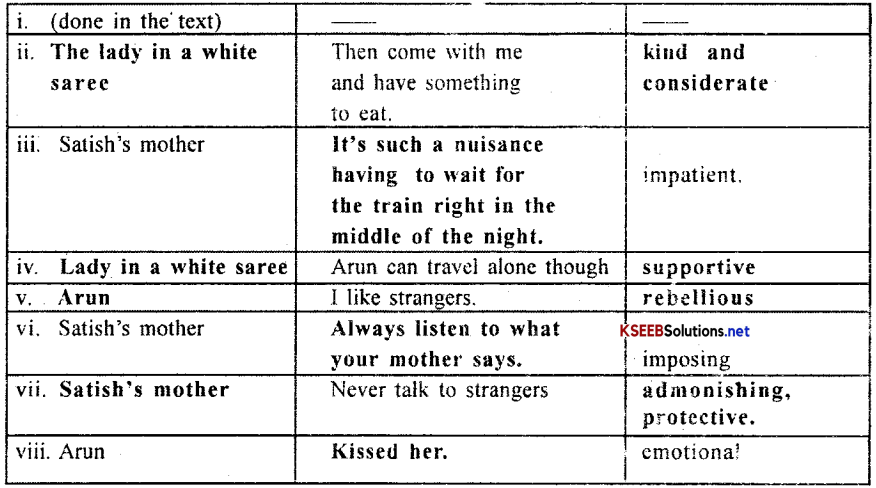 Question 2.
What might be the reason behind the lady’s adoption of a mother’s role?
Answer:
The lady was probably concerned about the safety of a lonely child on a railway platform, late in the night.

Question 3.
Why do you think the strange ‘mother’ was in a white saree? What would be your reaction when you see a person in white saree especially during night time?
Answer:
The lady could probably be a widow or a Christian missionary. When we see a lady in a white saree in the night she is assumed to be a ghost.

Question 4.
Imagine that the stranger in a white saree is a ghost. How will you change the ending of the story?
Answer:
She would turn into a ghost and attack Aran, Satish and his mother. Seeing this the others would flee.

VII. Rearrange according to the sequence of the lesson:

1. I looked straight into the eyes of the woman who held my hand, and she smiled in a gentle understanding way.

2. I had already forgiven her for lying; and besides, I had taken an instinctive dislike to Satish’s mother.

3. She stood there on the busy platform; a pale sweet woman in white, and I watched her until she was lost in the milling crowd.

4. Now tired of this game and of ambling about the platform, I sat down on my suitcase and gazed dismally across the railway-tracks.

5. She drew me out very well, and I had soon forgotten than we were strangers.

6. She allowed me to share the benefit of her advice, as the probably didn’t think my “mother” a very capable person.

7. We placed ourselves at the open windows, and the two women stood outside on the platform talking up to us.

8. She told a coolie to look after my suitcase, and then she led me away down the platform.

10. Satish was standing behind his mother, grinning at me, delighting in my clash with his mother.
Answer:

VIII. We use reporting verbs which summarise what was communicated while we change the speech. Some of the verbs which are commonly used are:
Warn, ask, answer, promise, sympathise, refuse, regret, explain, request, blame, advise, apologise, order, greet, suggest, invite, encourage, say, congratulate, declare, announce, instruct etc.
Write appropriate statements as response to the questions with the help of the examples and clues given. 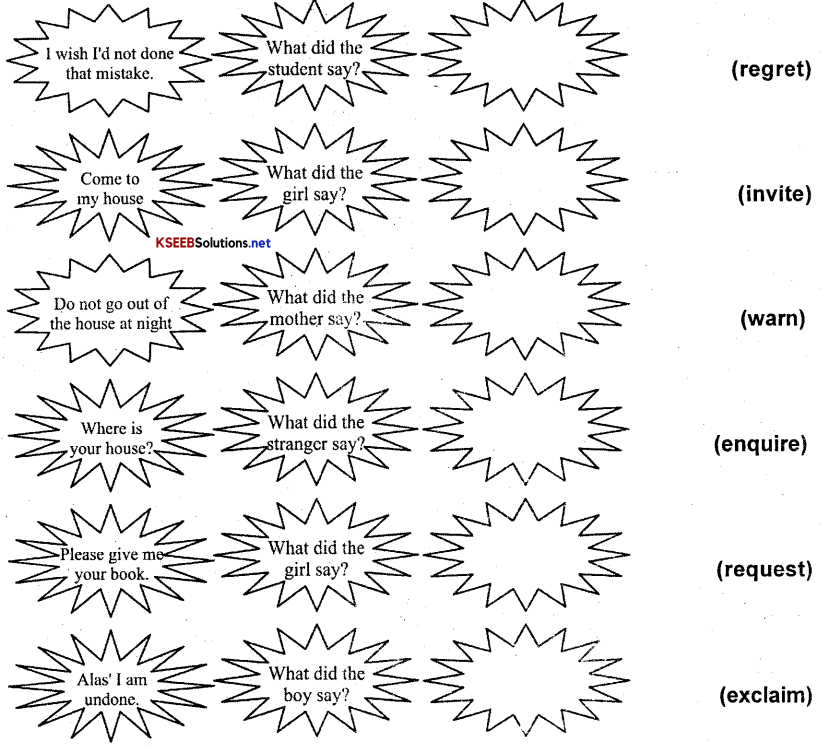 advise: She advised me to wash my hands before eating.
regret: The student regretted the mistake he had committed.
invite: The girl invited me to her house.
warn: The mother warned me not to go out of the house in the night.
enquire: The stranger enquired about the whereabouts of my residence. The stranger enquired where my house was.
request: The girl requested me to lend her my book.
exclaim: The boy exclaimed with sorrow that his pet parrot has died.

IX. Read the conversation and complete the following:

1. (i) Ranani told Sorru that their iaesv servant had a tendency to steal things.
(ii) Somu asked Ramani if anything was missing.
(iii) Rarnani answered that he had stolen one of their blankets.
(iv) Somu farther asked her which one and Ramani replied that it was the one they had taken from Hotel Palm Beach.

4. (i) The man scolded the servant for becoming very lazy those days.
(ii) He questioned him why he didn’t get the breakfast ready by 8 O’clock.
(iii) The servant apologized to him respectfully and explained that he couldn’t prepare the breakfast on time because he got up very late.
(iv) The man asked him if he hadn’t set the alarm before going to bed.
(v) The servant answered humbly that he had forgotten to wind the clock.

7.00 p.m to 9.00 p.m: Browsed through books at the book-stall, watched the behaviour of the passengers.

9.00 p.m to 11.00 p.m: Fed biscuit pieces to stray dogs. Observed trains arriving, passengers rushing about, the nervous Ticket collector and then the silence.

11.00 p.m to 12.00 p.m: Met a lady in a white saree, who looked dignified, commanding respect; offered me samosa, jalebies and tea; Satish came along with his mother. The stranger introduced herself as my ‘mother’ to them. Satish’s mother kept talking all the time about the train delay, to be wary of strangers etc.

Train arrived and we boarded the train. Satish was given fruits, a cricket bat and chocolates. His mother advised Satish to share the sweets with me and not to eat any rubbish on the way. The ‘mother’ held my hand. I let her do it. As a token of gratitude for her kindness to a lonely boy on a railway platform, I kissed her on her cheek when the train was about the leave.

Mark the stress for the following words:

XII. Direct and Indirect speech :
Rewrite the following sentences in the reported speech.

(i) He said, “Amuda was dancing.”
Answer:
He said that Amuda had been dancing.

(iii) “I never eat meat,” he explained.
Answer:
He explained that he never eats meat.

Question 4.
Read the statement and answer the questions that follow:
1. “Come on, this is empty.’ What was empty?
Answer:
The compartment was empty.

2. Where were they going ?
Answer:
They were going back to their boarding school.

II. Fill in the blanks:

Question 2.
You are traveling alone, (add a suitable question tag)
Answer:
Aren’t you?

Question 1.
How did Arun spend his time at the railway station?
Answer:
Most of the time Arun spent by pacing up and down on the platform. He browsed through the books that he saw at the book-stall. He also fed broken biscuits to stray dogs.

Question 2.
What do you think might have been the intention of the stranger on the platform when she befriended Arun?
Answer:
She appeared to be genuinely concerned about a lonely child at night on a railway platform. She was probably worried about his safety and stayed with him till his train arrived.

Question 3.
Why does Arun remember the lady whom he met on the platform?
Answer:
Arun was moved by the kindness that he experienced from the stranger and cherished those memories. Arun’s reminiscence can be summarized in the famous proverb ‘Actions speak louder than words’. He was touched by her actions and therefore remembered her so vividly.

The Woman on Platform Lesson Summary in English

It’s a fascinating story of how encounters with strangers at times, can leave a lasting impression.

Arun from a boarding school was waiting on platform 8 at Ambala station for his train which was due to arrive at 12 midnight. He was travelling alone as his parents felt that, being 12 years old, he was big enough to travel alone. He spent his time pacing up and down on the platform and observing the behaviour of the people.

He befriended a lady clad in a simple white saree and with no jewellery. She enquired of him; if he was traveling alone and about the time his train was due. As there was another hour for the train to arrive, she asked Arun to have something to eat with her. Though he was reluctant and shy at the j beginning, he was impressed by her kindness and dignity that he obliged.

She asked a coolie to take care of his luggage while they had something to eat. She bought him samosas, jalebies and tea. Arun I felt very comfortable with her that he told her all about his school, friends, his likes and dislikes. She spoke very little and seemed to enjoy the way he ate so hungrily that it seemed to cement their relationship.

The train finally arrived and the boys boarded the train. Satish was loaded with fruits and sweets. When the guard blew the whistle the ‘mother’ held his hand.Overcome with emotion and to express his gratitude to that lady who had fed a lonely boy on t a station-platform, he kissed her on her cheek.

The Woman on Platform Lesson Word in English