I. Fill in the blanks for the following questions.

II. Answer the following questions in about two sentences each.

Question 1.
Define planning
Answer:
Planning refers to the deliberate actions of the government to systematically allocate and utilize available resources to achieve predetermined goals in the interest of all.

Question 2.
List the prominent objectives of planning in India.
Answer:
The general objective of Indian planning are all follows ___________
(a) Increasing the rate of economic growth
(b) Bring about modernization in the economy
(c) Achieve self reliance
(d) Reduction in the inequality of income and wealth.
(e) Development of infrastructure
(f) Development of financial Institutions.
(g) Balanced regional development.
(h) Promoting private sector.

Question 3.
What are the major failures of India planning?
Answer:
The failures of Indian Planning are as follows.
(a) Slow growth in production and Income.
(b) Rise in prices.
(c) Increase in unemployment
(d) Persisting poverty and inequality
(e) Inafficient administration.
(g) Increase in exports not as expected.
Though the plans are sound and meaningful but the problem is no proper implementation.

Question 4.
Describe India’s economic situation during 1990-91
Answer:
The new economic policy is taking India to-wards liberal economy or market economy. It has relived India much of hard herships that she faced in 1990-91. More than everything else India could with stand the economic recession that swept the world in 2008-09.

Question 5.
List the major initiatives under the economic reform measures.
Answer:
Economic Reform (LPG Policies) Many economists became dissatisfied with the performance of the Indian economy, especially the public sector enterprises. During 1990-91 India faced serious economic problems. The huge deficit in trade balance, declining foreign exchange reserves, severe inflation, and very high budget deficit crippled the Indian economy and also life of the people. In this context, the need for reforming economic policy was widely felt and hence the new economic policy was initiated in 1991.

The new economic policy is also called as ‘economic reforms’. As thesepolicies comprise of liberalization, privatization and globalization they are also called as LPG policies. Economic reforms refers to the adoption of policies to eliminate the market barriers, encourage economic participation from private sector, reduce the fiscal deficit, increase exports and reduce imports, etc. for increasing the growth rate of the economy. This package of reforms consisted of:

1. A liberal industrial policy to invite foreign investment by privatization of industries and abolishing the licensing system.

2. Automatic approval for Foreign Direct Investment (EDI) for many activities.

4. Reforming the banking and financial sector in accordance with the internationally accepted standards.

5. Reforms in the tax structure for ensuring higher coverage of tax payers and increasing the tax revenue.

The economic liberalization has helped India to grow at faster pace. India is now considered one of the major economies of Asia. The Foreign investment in India has increased over the years. Many multinational companies have set up their offices in India.

The per capita GDP of India has increased, which is a positive sign. India has emerged as a leading exporter of services, software and information- technology products. Many companies such as Wipro, TCS, HCL Technologies, Tech Mahindra have worldwide fame.

Thus the new economic policy is taking India towards liberal economy or market economy. It has relieved India much of her hardships that she faced in 1990-91. More than everything else India could withstand the economic recession that swept the world in 2008-09. 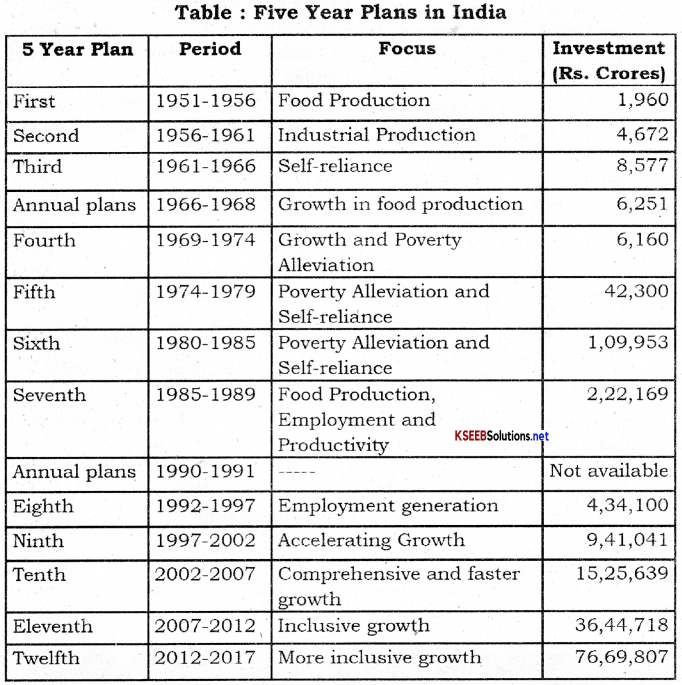 The tremendous increase in investment could be noticed.

Question 7.
Explain Digital India.
Answer:
To ensure that government services are availabe to citizens electronically and people get benefited from the latest information and communication technology.

Question 9.
What are encouragement to Industrial development.
Answer:

Question 10.
What steps – taken by the government to social sector.
Answer:

Question 11.
What are the steps taken by the government of India to improve urban development.
Answer: