The Swan and The Princes Questions and Answers, Notes, Summary

With the help of the Karnataka Secondary Education Examination Board Class 8 English Solutions Chapter 5 The Swan and The Princes Questions and Answers Pdf, Notes, Summary you can get an idea about the subject. Also we suggest the students keep the textbook aside to learn the subject in depth.

The Swan And The Princess Questions And Answers Question 1.
What was the complaint of Devadatta against Prince Siddhartha?
Answer:
Dev Datt complained against prince Siddhartha that he had taken the swan which Dev Datt shot down.

The Swan And The Princess Notes Question 3.
How did the bird react to Dev Datt’s call?
Answer:
When Dev Datt called the bird, it trembled with fear and cried.

The Swan And The Princes A Play Question Answer Question 4.
What did Siddhartha say to the swan? What did the bird do?
Answer:
Siddhartha said, “Dear Swan, don’t be afraid, he had come to it and it can go and sit on his arms”. The Swan at once flew onto Siddhartha’s arms.

The Swan And The Princess Question Answer Question 5.
What made Dev Datt and Siddhartha approach the King?
Answer:
Devadatta shot a swan. It fell down. It was badly wounded. Siddhartha picked it up and nursed it. Devadatta asked Siddhartha to give the swan to him. Siddhartha refused to give it back. Both of them went to the King for justice.

The Swan And The Prince Question 6.
How did each of them defend their actions?
Answer:
Devadatta said that he had shot the swan. And it belonged to him as per the Kshatriya rules. Siddhartha said that he had saved the bird’s life and protected it. He also said that a Kshatriya should not give up a suppliant who seeks his protection. So, the swan was rightfully his.

The Swan And The Princess Lesson Question 7.
How did the Chief Minister resolve the dispute in the end?
Answer:
The Chief Minister told Siddhartha to keep the swan on a stool. He asked Devadatta to call the bird to him. Devadatta called out to the bird. The bird trembled with fear and.cried out. It did not go to him.

The Chief Minister asked Siddhartha to call the bird. Siddhartha went near the bird. He lovingly told the bird not to be afraid of him and asked it to sit on his arms. The swan flew into his arms immediately. The Chief Minister said that the swan itself had solved the dispute. It had chosen its protector and not the person who had tried to kill it.

C2. Put the following events in the order te in which they occur in the play and write them in a paragraph:

Dev Datt shot an arrow at the bird. Siddhartha nursed the bird with great care. Dev Datt appealed to the king for Justice. Dev Datt called the swan to him. Siddhartha called the Swan lovingly. The swan flew onto Siddhartha’s arms.

C3. After the swan had been saved by Siddhartha, it was very happy and wanted to thank the prince. Write an imaginary dialogue between the swan and Prince Siddhartha. The beginning of the dialogue has been given

Swan: Dear Siddhartha, I want to talk to you.
Prince: Yes my dear. What’s it? Tell me, don’t fear anyone.
Swan: Dear prince, it’s only because of your kindness, I am still alive today.
Prince: Why are you crying?
swan: Imagine what would have happened to me with Dev Datt?
Prince: Don’t you think it was your luck?
swan: Yes, I was fortunate enough to fall near you.
Prince:  I was also fortunate to save you.

The Swan And The Princess 8th Standard Vocabulary:
VI. Some definitions are given below. Substitute each of them with a single word using prefix given above. One example is done to you
Eg.

Use a correct ending with the word below to complete the sentences.
e.g.
Aswin was awakened with a feeling of excitement. (excite)
It was a glorious day, not cloudy at all. His teacher Mr. Pradeep had a guest speaker on that morning. Mr. Anilkumar, the speaker was an u of a machine and so, was famous throughout the world. By a continuous study of magnetism and its force, he was able to develop a device to generate heat using the sun rays.

V3. Add one letter and make a new word y to mean the word given in bracket:

V4. Fill in the blanks with the given words using the suffixes – ful’ or ‘less’ appropriately.

The Swan And The Princess Lesson Revision Exercise:

Task 5. So far, you have been able to identify 12 vowel sounds. Some words are given below. Pronounce them and write them in the respective columns. Note that some words have more than one vowel. For such words, a particular vowel is underlined. Put them in the right columns.
Words
Shoe, cap, plus, manage, manage whose, fruit, brother, brother, them, mud, spent, above, above, flat, burn, push, ore, pass, scatter, scatter, ease, check, hut, puss, devil, devil, art, solt, mint, board, mast, fish, shock, vast, lock

Task 1. Think of appropriate requests in these situations.

C Reading:
Task 1. The following table gives the minimum and the maximum temperature of some cities during summer. Read it and complete the sentences given below.

Now we can draw the following inferences:

The Swan And The Princes Grammar:
Task 1. Now fill in the blanks using the appropriate prepositions from the table.

Shantigrama is a small village in Chikka Mangalore district. There lives a boy Nameeth. He is studying in 8th standard. He is very punctual. Every day he gets up early in the morning. His school is three kilometers away from his village. So, he leaves his home at 8.30 a.m. He goes to school on foot. He always reaches school in time.

Nameeth participates in all the school activities. He listens attentively, recites poems, solves maths sums, plays games and draws beautiful pictures. His classes usually close at 4 p.m., but he stays in the school till 5 p.m. After the classes, he sits under a tree with his friends and practices music for an hour. He leaves the school campus at 5 O’clock and reaches home around p.m. He refreshes himself and plays with his friends for an hour. He studies for two hours and watching the news on the TV. After supper, he goes for a walk. At 10.30 p.m. he goes to bed.

Task 2 Study the map key given carefully and complete the sentences below using appropriate prepositions.

Task 3. Fill in the blanks with the appropriate prepositions, lino preposition is needed leave the space blank.

E. Writing:
Task 1. Complete the following letter supposedly written by Hirachand to King Akbar telling-Mm that he is innocent. Use the clues given below.

Dear Sir,
I feel I am punished for no mistake of mine. You want to execute me because I have an unlucky face but I feel it is not fair. What will my wife and children do without me? what wrong have I done? I say I am innocent. I beg for your mercy and request you to free me.

Write a letter to your father requesting him to send Rs.600/- using the clues given below.
About your studies- performance in tests- excursion arranged by your school- places to be visited and date- money required.

How are you Pappa ? I am fine and hoping the same from you.
I am studying well. Today 1 got the test marks. This time I scored 90 marks in Maths and in other subjects as usual. Kannada and Hindi subject marks are not yet announced. I hope that I get cent percent in that two subjects. In science 1 got 96 and in Social 98.

Our school has arranged an excursion to Mysore, Nagarahole, Bandipur etc. It is a two day trip. It is scheduled on 28th & 29th of this month. Within 20th we should confirm our attendance by paying Rs. 600/-. If you and Mom permit me to go, I will feel happy. I am interested to go because this is the last year and my friends are forcing me to join them. Please give your permission and send Rs.600/- within time.

Convey my best regards to Mom and Putta. 1 am awaiting your reply soon.

Write a letter to your class teacher, requesting him for grant of leave using the points given below. Class and section – reason for leave- days-father’s consent- how you make good of the lessons done during your absence. ‘

I am Ramappa of VIII std studying in your school. I am suffering from viral fever and throat infection. Our doctor is treating me and has suggested me to take 5 days leave because it is epidemic. I have attached the Doctor Certificate.

My friends have promised me to help in notes writing. After my recovery definitley. I will study well. Please grant me leave.
Thanking you Sir,

The Swan and The Princes Additional Questions and Answers

Question 1.
What was King Suddodhana doing at the beginning of the play?
Answer:
King Suddodhana was sitting on his throne, the tie was in conference with his ministers.

Question 4.
Why was the king puzzled?
Answer:
The king thought it was a strange case, so he was puzzled.

Question 1.
‘The Swan and the Princes’ is a/an
A) extract
B) folk play
C) short story
D) life sketch
Answer:
B) folk play

Question 3.
Who appealed to the king for justice?
A) Devadatta
B) Siddhartha
C) Suddodhana
D) the swan
Answer:
A) Devadatta

Question 4.
The swan sought the protection of
A) Devadatta
B) the king
C) Siddhartha
D) the chief minister
Answer:
C) Siddhartha

The Swan and The Princes Lesson Summary in English

Suddodhana was the king of Kapila Vastu, Siddhartha was his son and the prince of Kapilavastu. Dev Datt was Siddartha’s cousin. Once Siddhartha and Dev Datt were playing in the garden. Dev Datt shot a swan and it fell on ground. Siddhartha saw this and washed its wound, applied medicine and saved its life.

So Dev Datt came to Suddodhana’s court to get justice and explained the matter. The King called Siddhartha and asked about the matter. Dev Datta claimed the swan because he shot it and Siddhartha argued that the swan belongs to him because he protected and saved its life. Both were correct. How to give judgment, so the king asked the help of his Chief Minister. The Chief Minister thought a plan and said to both the boys. The swan will decide the case.

First, they put the swan on the stool and Dev Datt was asked to call the Swan. He did it, but the swan trembled and cried with fear. Next Siddhartha went near the swan and consoled it and said it need not fear, then the swan flew up and sat on his arms. The Chief Minister said to King that swan had decided the case. All ac­cepted the judgment that the swan belonged to prince Siddharta.

The Swan and The Princes Summary in Kannada 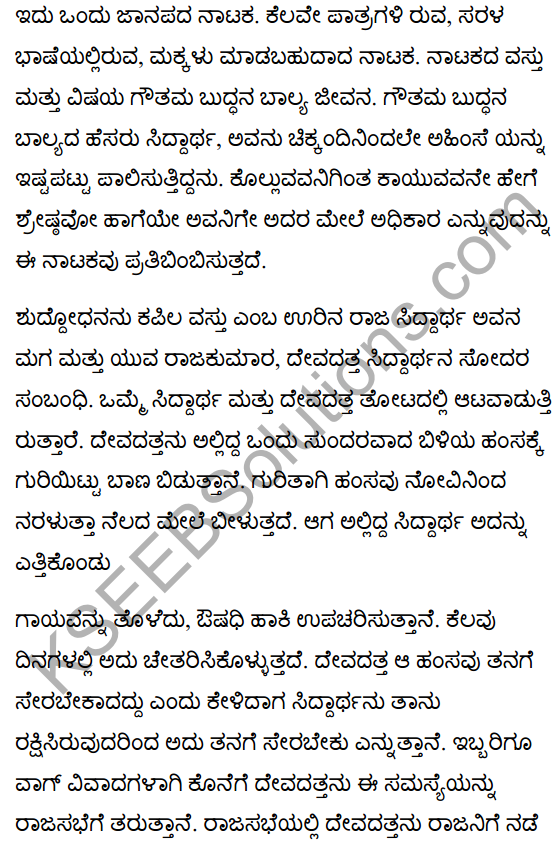 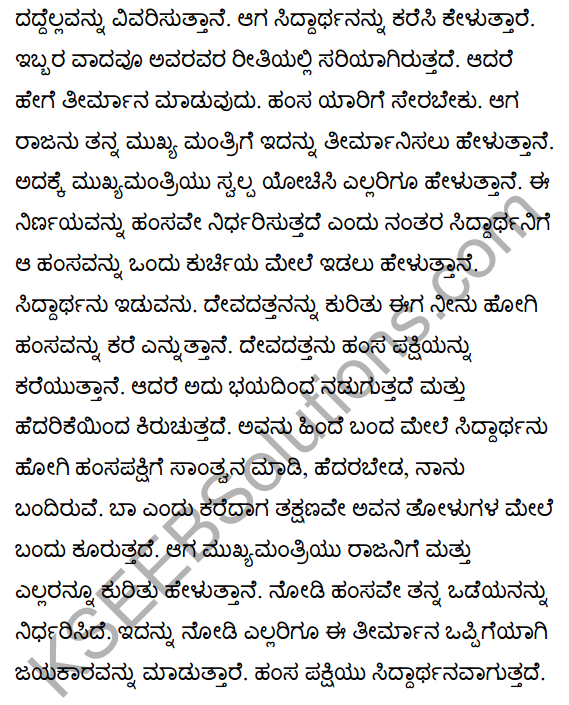 The main aim is to provide quality education for the students of Class 8 English Karnataka State Board Solutions. Class 8 is very important for the students in their career. We hope the information provided in this KSEEB Solutions Class 8 English Chapter 5 The Swan and The Princes Questions and Answers is satisfactory for all. Bookmark our site to get the latest information about the solutions.