Question 1.
A force of 7N acts on an object. The displacement is, say 8m, in the direction of the force. Let us take it that they force acts on the object through the displacement. What is the work done in this case?
Answer:
Work done on an object = 7N × 8m = 56 Nm or 56 J.

Question 2.
When do we say that work is done?
Answer:
Two conditions need to be satisfied for work to be done:

Question 4.
Define 1 J of work.
Answer:
1 J is the amount of work done on an object when a force of 1 N displaces it by 1 m along the line of action of the force.

Question 6.
What is the kinetic energy of an object?
Answer:
Objects in motion possess energy, we call this energy kinetic energy. 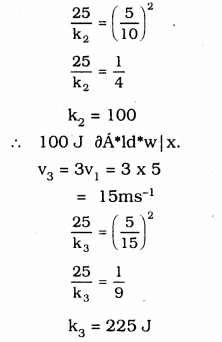 ∴ When velocity is increased three times its K.E. is 225J.

Question 9.
What is power?
Answer:
Power is defined as the rate of doing work or the rate of transfer of energy w
P = \(\frac{w}{t}\)

Question 10.
Define 1 watt of power.
Answer:
Power is 1 W when the rate of consumption of energy is 1 JS-1.

Question 1.
Look at the activities listed below. Reason out whether or not work is done in the light of your understanding of the term ‘work’

Question 3.
A battery lights a bulb. Describe the energy changes involved in the process.
Answer:
In the case given in the question, the battery has chemical energy which is converted into energy. Electric energy provided to the bulb further converted into light energy.

Question 5.
A mass of 10kg is at a point A on a table. It is moved to a point B. If the line joining A and B is horizontal what is the work done on the object by the gravitational force? Explain your answer.
Answer:
Work done by gravitational force W = mgh
Where h = Difference in the heights of initial and final positions of the object.
Here both the initial and final positions are on the same horizontal line.
So there is no difference in height i.e., h = 0.
∴ work done W = mg × 0 = 0.

Question 6.
The potential energy of a freely falling object decreases progressively. Does this violate the law of conservation of energy? Why?
Answer:
The total mechanical energy remains constant / as P.E. of the freely falling object decreases. Its kinetic energy and the kinetic energy increases on account of an increases its velocity) the law of conservation of energy is not violated.

Question 7.
What are the various energy transformations that occur when you are riding a bicycle?
Answer:

Question 8.
Does the transfer of energy take place when you push a huge rock with all your might and fail to move it? Where is the energy you spend going?
Answer:
When we push a huge rock and fall to move it. The energy spent in doing so is absorbed by the.rock. This energy is converted into potential energy of the configuration of the rock which results in its deformation. However t his deformation is not visible on account of the huge size of the rock.

Question 11.
What is the work done by the force of gravity on a satellite moving round the earth? Justify your answer.
Answer:

The satellite round the earth moves in a circular orbit. Here the force of gravity acts towards the centre of the earth and displacement of the satellite is along the tangent of the circular path that means therefore and displacement are perpendicular to each other.
So, work done, W = F.S cosθ
= F × S cos 90°
= F × S × 0
= 0
That is, no work is done by the force of gravity.

Question 12.
Can there be displacement of an object in the absence of any force acting on it? think. Discuss this question with your friends and teacher.
Answer:
If an object moves with a constant velocity (i.e, there is no acceleration) then no force acts on it. As the object is moving ie it is displaced from one position to another position.

Question 13.
A person holds a bundle of hay over his head for 30 minutes and gets tired. Has he done some work or not? Justify your answer.
Answer:
The person has no movement ie his displacement is zero. So the person had done no work (∵ work is done only when the object is displaced). 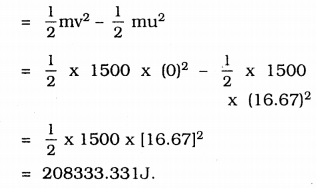 Question 18.
In each of the following a force, F is acting on an object of mass M. The direction of displacement is from west to east shown by the longer arrow. Observe the diagram carefully and state whether the work done by the force is negative, positive or zero.

Question 2.
An object having the capability to do work is said to possess __________
Answer:
energy.

Question 3.
__________ is the energy possessed by an object due to its motion.
Answer:
Kinetic energy

Question 2.
How does a bullet pierce a target?
Answer :
A bullet moves with large velocity and as such possesses a lot of kinetic energy the work in piercing the target is derived from the kinetic energy of the bullet.

Question 6.
Electricity is the most convenient form of energy. Why?
Answer :
It can be converted into other forms of energy easily.
It can be produced by different means. It is ecofriendly