Enhance your subject knowledge through the KSEEB Solutions for Class 7 English The Quarrel Questions and Answers lay a stronger foundation of your basics. Verify your answers with the Karnataka State Board Class 7 English Chapter 8 The Quarrel with Answers provided and know where you went wrong.

2. Make a list of four things that make you get angry with others.

One is done for you:

They speak unpleasantly about me when.
a. When they blame
b. When they lie
c. Mien they irritate
d. When they cheat.

C1. Answer the following questions in a word or sentence:

Question 1.
Who quarrels in this poem?
Answer:
The poet (one of the brother) quarrel in the poem.

Question 3.
How was the end of the fight?
Answer:
At the end, her brother came back and patted her and said that he was wrong. So now he was right.

Question 5.
Name the poet who wrote the poem “The quarrel”
Answer:
“The quarrel” The poet was Eleanor Faijeon.

C3. Discuss the following with your partner and answer.

Question 1.
How do you understand the lines seven and eight?
Answer:
During their argument (quarrel) the poet’s brother said he was right but the poet knows it (he) was wrong.

Question 2.
“We hated one another” – says one of them. Is it true? Why do you think so?
Answer:
Here hated means the strong feeling of dislike. Both were wrong, their feeling was changed. At the time of quarrel, it was said, so true to some extent only.

Question 3.
What message does the poem give?
Answer:
We have opinions and when we meet someone or live with a sibling or parent, who has different means to our own. The brother in this poem realises that his sister is moving important to him than anything else, even something that he truly believes in so the brother is right in saying he is wrong, would not it be nice if there are more people in the world like him? This poem also talks about the secret to keeping good relationships, good making them Bella.

C4. Answer the following and discuss it in the class.

Question 1.
Who according to you is right?
Answer:
Self-assessment

Question 2.
Discuss the end of the quarrel.
Answer:
Self-assessment

The Quarrel Summary in English 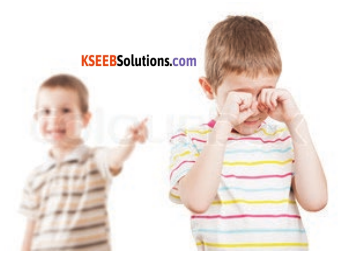 “The Quarrel” was the poem written by Eleanor Farjeon. This is a first-person narrative poem. The poet as a child quarreled with her brother. In childhood, the quarrel is common between brothers, sisters, and play-mates. Even they do not know why they were quarreling. During a quarrel both argued and it leads one thing to another. The quarrel started for small things, in the end, the reason was strong, both didn’t agree to compromise.

The Quarrel Summary in Kannada 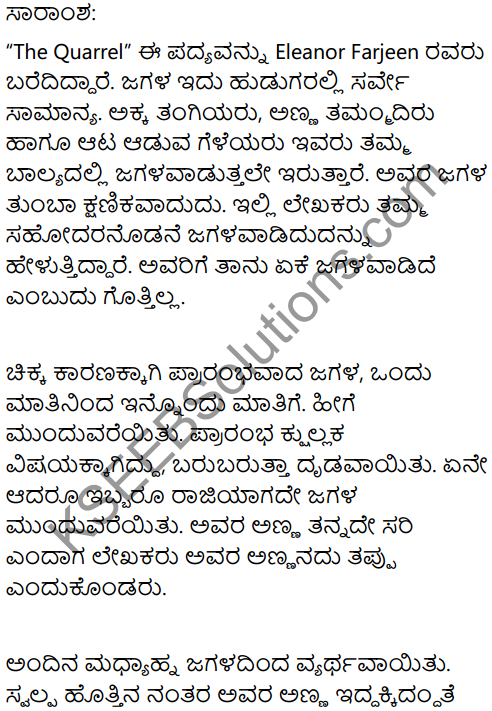 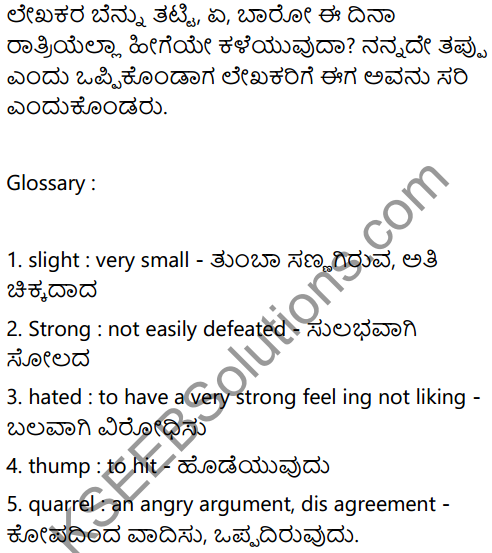 The above furnished information regarding KSEEB Solutions for Class 7 English Chapter 8 The Quarrel Questions and Answers is true as far as our knowledge is concerned. If you have any doubts feel free to reach us via the comment section and we will reach you at the soonest possible.