With the help of the Karnataka Secondary Education Examination Board Class 8 English Solutions Chapter 3 Before The Match Questions and Answers Pdf, Notes, Summary you can get an idea about the subject. Also we suggest the students keep the textbook aside to learn the subject in depth.

Before The Match Questions and Answers, Summary, Notes

A. Answer the following questions in a sentence or two each:

Question 3.
Who was the ‘Tate’ of the team? Why was he called so? Swami is compared to Tate as he is a bowler. Tate refers to
Answer:
the best bowler of the time, Maurice Tate, the English cricketer.

Question 4.
Why could Swami not attend the practice in the evenings?
Answer:
Every evening there was Drill Class, Scouting and some school activity or other.

Question 5.
What was Swami’s excuse for exempting him from drill for a week?
Answer:
Swami claimed to be unwell to escape the drill class. He said that he had the problem of delirium.

B. Read the extracts given below and answer the questions that follow:

1. “There was only one who caused him the deepest anxiety day and night. ”

Question ii.
Why was this so?
Answer:
Every evening Swami had Drill Class or Scouting or some other school activity that was compulsory.

2 “Just seven days before the match, Swaminathan realised that his evenings were more precious than ever. ”

Question i.
What is the match referred to here?
Answer:
The match between MCC, Malgudi Cricket Club, and another local youth team called the YMU, Young Men’s Union.

Question ii.
Why were the evenings more precious than ever?
Answer:
There was just one week left for the match and hence every evening was precious.

3. “But contrary to the custom, he had not taken off his coat and cap. ”

Question ii.
Was there anything really wrong with Swami?
Answer:
No. Swami, in fact, was in the pink of health.

Question iii.
What is the real purpose of Swami’s visit?
Answer:
Swami’s real purpose is to get a fake medical certificate so that his Head Master would exempt him from the compulsory classes in the evenings. Swami could then go for his cricket practice sessions.

5. “I can’t give you the certificate. But I shall talk to your Head Master about you and request him to let you off after four-thirty. ”

Question ii.
What does he offer to do instead?
Answer:
The doctor offers to speak to the Head Master and request him to let Swami off after four-thirty. .

Question iii.
Do you think the doctor was kind to Swami?
Answer:
In the extract, the doctor seems to be a righteous and kind man. He does not agree to give a fake certificate as nothing is actually wrong with Swami. But when Swami explains to him how important it is for him to attend the practice sessions in the evening, the doctor promises to speak to the Head Master and request him to exempt Swami from the drill session.

C. Answer the following questions in about six or eight sentences each:

Question 1.
How did Swami manage to get the permission of the drill master?
Answer:
Swami has missed many practice sessions of the cricket match and there is only one more week for the match against YMU Cricket Team. Rajam has already given a stern warning to Swami. Hence Swami is determined to miss his Drill Class in school. He knows that his Drill Master will not let him go easily. So, he pretends to be ill. When the Drill Master refuses to let him off, he keeps following him making the same request. Finally, the Drill Master, who is annoyed, asks him what his problem is. Swami claims to be suffering from delirium.

He says that he was unable to sleep even a wink the previous night. He adds that his doctor had advised him not to attend Drill for a week. After all this, the Drill Master permits Swami to skip the Drill Session adding that he didn’t believe a word of what Swami said. Thus we see that against all odds Swami manages to get the permission of the Drill Master to skip drill.

Question 2.
What was Swami’s plan to get exemption from drill for a week?
Answer:
Swami knew that if he had to be exempted from drill for a whole week, his pretence of illness alone wouldn’t suffice. He knew that he needed a more authentic proof of his illness. That is why he decides to go to a doctor before going to school to get a medical certificate. With the doctor, however, he is honest. He tells him about the cricket match and the need to get time for practice sessions. He hopes that the doctor would understand his predicament and give him the false medical certificate.

Question 3.
How did the doctor promise to help Swami?
Answer:
On coming to know from Swaminathan that he wants the doctor to give him a certificate stating that he should be exempted from evening classes, the doctor wants to know whether there is any real problem with Swaminathan. The doctor is greatly amused when Swaminathan tells him that he has been suffering from delirium.

However, from Swami’s explanation that delirium was some kind of stomach ache, the doctor realises that Swami has a total misunderstanding of the term. On examining Swami, the doctor also comes to know that Swami is in the pink of health. Hence the doctor refuses to give him a Medical Certificate stating that he would be prosecuted if he did so. However, he wishes Swami well and offers to speak to the Head Master about Swami’s inability to attend the compulsory sessions in the evenings.

Complete the following paragraphs with the helps of clues give below:
Keywords: palace, soldiers, fond of, store house, to eat, demanded, summoned, devised, noticed, investigation, keep watch, honey, stole, thief, stand, detect, lifted up, observed, identify.
Linkers: who, and, So, As soon as, Thus.

Before The Match Summary in English

‘Before the Match’ is an excerpt from R.K. Narayan’s work ‘Swami and Friends’. ‘Swami and Friends’ is the first of a trilogy of novels written by R.K. Narayan, a celebrated English novelist from India. The novel, which is also Narayan’s first, is set in pre-independence days in India, in a fictional town – Malgudi, which has almost become a real place in India today, due to the wide recognition and popularity of Narayan’s many novels.

‘Swami and Friends’ is the story of a 10-year-old boy, growing up during this particular time. He is a student at Albert Mission School, a school established by the British which gives importance to Christianity, English literature and education.

‘Swami and Friends’, set in British-colonial India in the year 1930, begins with an introduction to Swaminathan and his four principal friends: Somu, Sankar, Mani, and the Pea. Rajam also joins the group a little later. However, in the selected piece there are references to only Rajam and Mani. Swaminathan along with Rajam founds a new cricket team called the M.C.C, an acronym for Malgudi Cricket Club. Swami is compared to Tate, the best bowler of the time – Maurice Tate, the English cricketer. 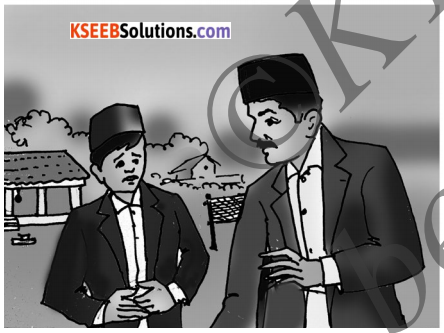 A match is scheduled between the M.C.C. and another local youth team called the Y.M.U., Young Men’s Union, but new tensions mount between Rajam and Swaminathan in the bui dup to the match. Swaminathan misses several practices due to the heavy load of drill, scouting and other things at his new school. His truancy infuriates Rajam, who suggests that they speak to the Headmaster for permission for Swami to leave school early for practice sessions. Swami does not agree and Rajam threatens Swami saying he would never speak to him again if he keeps any batsman waiting for more than five minutes.

Swami tries to escape the drill in the evening by telling the drill master that he is unwell. Swami thinks of ‘Delirium’ as an excuse for not attending drill. Though the Drill Master does not believe Swami, he lets him go. His cricket team members are happy to see Swami come early for practice. But Swami knows that he has to find some other ways to escape drill and other tasks of school for a whole week. So next day, before school, early in the morning, he visits a doctor and tells him honestly that he wants a fake medical certificate. When the doctor tells him that he should have one or the other ailment if he has to certify, Swami mentions delirium as his problem. 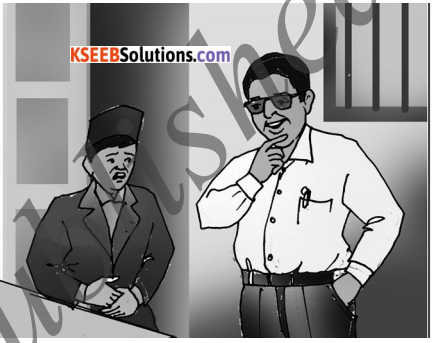 The doctor asks Swami in surprise whether he knows the meaning of delirium. When Swami states that delirium must be something like stomach ache, the doctor has a hearty laugh. The doctor then tells Swami that he wouldn’t be able to give the certificate. When Swami earnestly requests him to help him out, the doctor promises to speak to the headmaster and convince him to allow Swami to go for practice. Swami is greatly relieved and he leaves the place thanking the doctor for being kind to him.

peace of mind – a state in which one feels calm and quiet, not worried quiet, not worried
thrash – defeat someone very badly in a game
anxiety – worry or fear about something
Tate – Swami is given the nickname ‘Tate’ after the famous English fast bowler, Maurice Tate, who was well known in the 1920s and 1930s.
fortnight – two weeks
contrary to the custom – different from what usually happens every day
tucked up – the edges of their dhotis were folded and turned up, so that they were held in place
muttering – saying something in a quiet voice, that is difficult to hear, especially when you are annoyed
became desperate – tried something when everything else had failed
pursued – followed or chased someone
oath – a word or phrase that is used to express anger, surprise, shock, etc.
delirious – a state of excitement, when you cannot think or speak clearly, usually caused by a fever
scouting – activities related to an organisation called the Scout Association. It was originally meant for boys, to train young people in practical skills and involve them in many activities like camping, etc.
of late – in recent times
choke – make it difficult for someone to speak because they do not have enough air
examined – looked at someone / something closely, to see if there was anything wrong
in the pink of health – be in very good health
to get rid of – to free yourself of something that is annoying or causing a problem
prosecuted – charged with a crime in a court of law

The main aim is to provide quality education for the students of Class 8 English Karnataka State Board Solutions. Class 8 is very important for the students in their career. We hope the information provided in this KSEEB Solutions Class 8 English Chapter 3 Before The Match Questions and Answers is satisfactory for all. Bookmark our site to get the latest information about the solutions.