ILA. Your teacher reads a passage. Listen to it. Then answer these questions.

Question 1.
Name any one trick which the magician says he can perform?
Answer:
Magician can change a piece of paper into a hundred rupee note.

Question 2.
Usually how does a magician play a trick?
Answer:
Magicians hypnotise people, that means they capture their attention.

IRA. Read the following and answer the questions given below.

1. In the photo you see Haj i Kalimullah Khan from Mallihabad, U.P. He has grown 300 different kinds of Mangoes on a single tree. Recently he won the Padmashri award for this and he also finds his name in the Limca Book of Records. He talks so lovingly about his orchard and his trees as if he were talking about his own children.

3. The craft developed by him has become a mystery for researchers and agriculturists alike. They are immensely surprised by his work. One of his previous creations is a tree in the Moghal Garden at the Rashtrapati Bhawan, flowering 54 kinds of mangoes. The ten feet tall tree was brought from his garden to Delhi in 1999 as a present to the then President.

Question 3.
Say which words are used to mean the following.

I. Answer the following questions:

Question 5.
How was the weather in the State of California?
Answer:
In- California, the weather was mild and the soil was rich and varied.

Question 7.
How was the weather in the State of California?
Answer:
In- California, the weather was mild and the soil was rich and varied.

Question 8.
What is grafting?
Ans.
Grafting is cutting a living twig of plant and fixing it in a cut made in another plant, to form a new growth.

II. Which of the following things was Burbank able to do because of his experimentation? [Tick off [✓] [against the true statements, and a [×] against others].

a) Growing hundreds of varieties of apples.
Answer:
[✓]

III. Read and discuss your responses with your partner. Then write:

Question 1.
How did Burbank’s genius benefit the life of a common man?
Answer:
The products of Burbank’s genius continue to play a part in the day-to-day lives of the people throughout the world. His influence prevails in the scientific community among those who work in the fields of agriculture, horticulture, forestry and livestock. His most important contribution is a lovely flower that never existed before. He developed a fruit and vegetable, the taste of which was improved with his experiment.

Question 2.
Why did Burbank move from Massachusetts to California?
Answer:
Burbank found that the climate of his native place was not suitable for his work. So he moved to the state of California at the age of 26. In California, the weather was mild and the soil was fertile and varied. It was a suitable place for his work.

Question 3.
What did Burbank call his new home? and why?
Answer:
Burbank called his new home as ‘The chosen spot’, because he considered that place to be best suited for his work, when compared to other places on the earth.

Question 4.
How did grafting help Burbank in his experimentation?
Answer:
Grafting helped him to get several thousand different varieties of fruits in one arce of his farm. He had grown 526 different types of apples on the same tree, by grafting. It helped him not only to save space, but also to speed up his experiments. Instead of waiting for 15 years for a tree to give fruits, he would graft (a twig from a young plant to a fruit bearing tree) and get fruits in just two or three years. It increased his efficiency of experimentation

Question 6.
What were Burbank’s experiments on cherry, blackberry, cactus and shasta daisy?
Answer:
He developed an improved cherry, a thornless Blackberry, a cactus without thorns that is largely used as food for livestock, a peach tree that could withstand freezing weather and a new flower ‘ Shasta Daisy’.

IV. Write a paragraph on each of the following.

Question 1.
Write a note on Burbank’s early life?
Answer:
Burbank was born on March 7, 1849. He was brought up on a farm in the state of Massachusetts. He was attracted towards the wonders of nature and learned the techniques of growing various crops and plants during his early years. But when he read Darwin’s book “Variation of animals and plants under Domestication’, he decided to devote his life to grow new varieties of plants. He started market gardening and became successful.

Question 2.
Describe the three techniques on which Burbank’s experiments were based.
Answer:
Burbank made the experiments on three basic techniques. He had grown a variety of domestic and foreign plants under different conditions. They would prove strong, plentiful and showed other desirable qualities.

Secondly, he had grown many varieties of fruits, flowers and vegetables by changing water, food supply, temperature, light or space. He had grown very dissimilar qualities of plants by crossing the plants.
In the final step, he could recognize and select the plants which showed desirable changes and selected them for further experiments.

VI. Look at the following phrase and see how the two words go together. They are collocative words.

Now fill in the blanks with the most appropriate describing words given in the box below. For a few, you may have more than one combination.

V2. Given below are some names. Classify them into categories of flowers, fruits and vegetables. You may consult a dictionary/ encyclopaedia if you need.

A. Listen and Speak

1. Chikkanayakanahalli: A monkey, addicted to alcohol and often attacking people, is scaring the wits out of the residents of Shettykere, a village here.

2. The monkey was first noticed in the village a month ago. It has taken a liking for alcohol, perhaps due to some mischievous alcohol addicts in the villages, initiating it into drinking. It is now addicted to the brew and often gets high. It has also become indiscriminate in its eating habits and has put on weight and become aggressive.

3. Once inebriated, the monkey begins harassing passersby and even attacking them. The aggressive monkey scares even a large crowd. So far, it has attacked at least 30 persons, and injured many of them. Even dogs are among its victims.

4. The monkey, which has made the bus terminal its home, snatches travellers’ bags and their belongings. Anyone resisting it is attacked.

5. But pious, if not cowardly they are, the residents see it as an incarnation of Hanuman, the monkey god, and worship it, but their piety is wearing thin, and they want someone to get rid of the rowdy Simian.

Question 2.
How did addiction affect the monkey? (See paragraph 2)
Answer:
Monkey got addicted to alcohol and often got high. It became indiscriminate in its eating habits and had put on weight and became aggressive.

Question 4.
Match the phrases with their meanings

The Passive Voice
Task. Match the names in the left hand column with the discoveries / inventions / compositions etc. in the right-hand column. Then write sentences in both active and passive voices using the agent and appropriate verbs.

Task 1. An outline of a story is given below. Complete the story supplying the required words and phrases.

Task 2. Expand any one of following proverbs into 5 or 6 sentences of your own.

I. Choose the best answer:

Question 6.
Burbank carried on his experiments and original work on plants for more than half a century on :
(a) Santa Claus
(b) Santa Rosa
(c) Santa Flower
(d) Santa apple.
Answer:
(b) Santa Rosa

Question 12.
The new flower that was developed by Burbank which bears his name is
(a) Jasmine
(b) Rose
(c) Lotus
(d) Marigold.
Answer:
(b) Rose

Question 1.
Who was Burbank?
Answer:
Burbank was a great horticulture scientist. He developed varieties of fruits, flowers and vegetables.

Question 2.
Where was he brought up?
Answer:
He was brought up on a farm in the state of Massachusetts.

III. Match the following with their meanings:

This write -up describes how Luther Burbank achieved his ambition of growing and grafting varieties of fruits and vegetables.

Series of questions are posed to the reader in the first paragraph such as who turned a yellow flower into red? who made the seeds to plum disappear? who grew 500 different kind of cherries on one tree? – what does the world call a man who made this achievement? was he a master of gardens, a skilled plant grower or a miracle working magician? These questions create a curiosity among the reader.

The man responsible for controlling nature in these ways was the hard working scientist named Luther Burbank.

Though Luther Burbank is no more, the products of his genius continue to play in the day to day lives of people throughout the world. We can find his influence in the field of agriculture, horticulture, forestry and livestock. His most important contributions was the development of lovely flowers, tastiest fruits and vegetables.

Burban was bora on 7th March, 1849. He was brought up on a farm in the state of Massachusetts. He was attracted towards the wonders of nature and learned the techniques of growing various crops and plants during his early years. He was influenced by Darwin’s theory and devote his life to grow new varieties of plants.

He started market gardening at the age of 21. He planted 29 seeds forms an early rose potato plant. He produced a new variety of seed. This potato was called “Idaho potato”. It became popular among local framers and later through out the world.

At the age of 26, Burbank left his native place and moved to the state of California where the climate and soil was suitable for his experiment. He carried on his experimental work on plants for more than fifty years on “Santa Rosa” near the city of San Frabcisco. He described his new home as “The chosen spot”.

He made the experiments on three basic techniques. He had grown the variety of domestic and foreign plants under different conditions. They would prove strong, plentiful, and showed other desirable qualities.

He made the experiments on three basic techniques. He had grown the variety of domestic and foreign plants under different conditions. They would prove strong, plentiful, and showed other desirable qualities.

Secondly, He grew many varieties of fruits, flowers and vegetables by changing water, food supply, temperature etc. He grew dissimilar plants by crossing the plants.

In the final step he could recognize and select the plants which showed desirable changes and select them for further experiments.

Burbank had the great patience in his work. At the end of his successful attempt to produce a white blackberry he set fire to all the rejected seedlings. That pile was 12 feet high, 14 feet wide, 22 feet long and contained 65000 berry bushes. He retained less than two dozen bushes for further study. Throughout his efforts to force nature to obey his orders, he had grown several thousand different varieties of fruits by grafting many twigs on a single tree. He was able to grow 526 different types of apples on the same tree. By grafting a twig from a young to a fruit bearing tree, he was able to get fruits in just two to three years.

Burbank carried out more than 10,000 separate experiments with 600 different kinds of plants. He developed an improved cherry, a thorn less Blackberry, a cactus without thorns, peach tree that, could withstand freezing weather, 73 variety of new flower including the Shasta Daisy and the Burbank Rose.

Many of his efforts ended in failures. He crossed tomato with potato. Though a vegetable was produced, it had no commercial value. He was not disappointed. Burbank worked with the simple elements of nature to produce effects that were remarkable as in other fields. 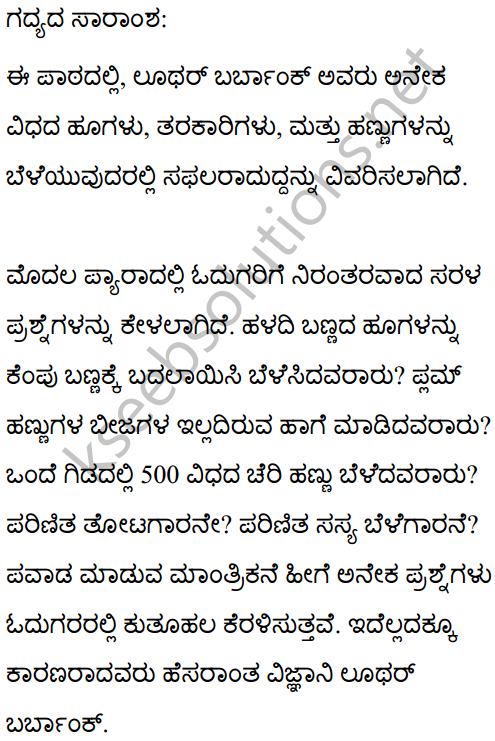 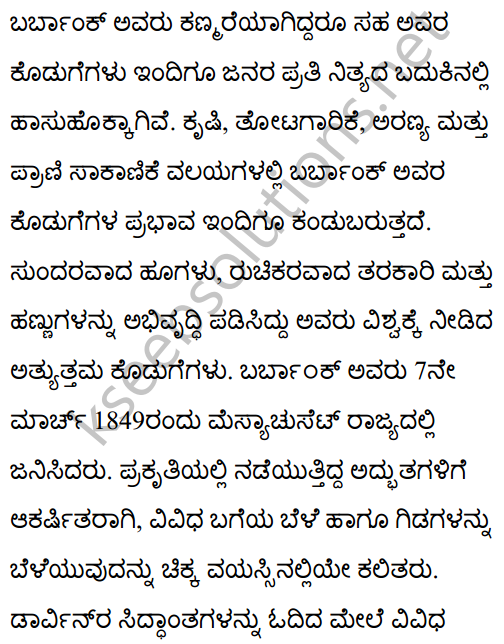 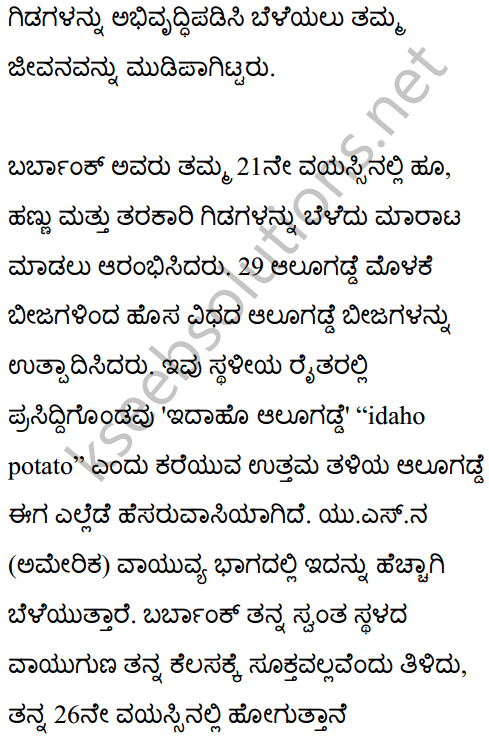 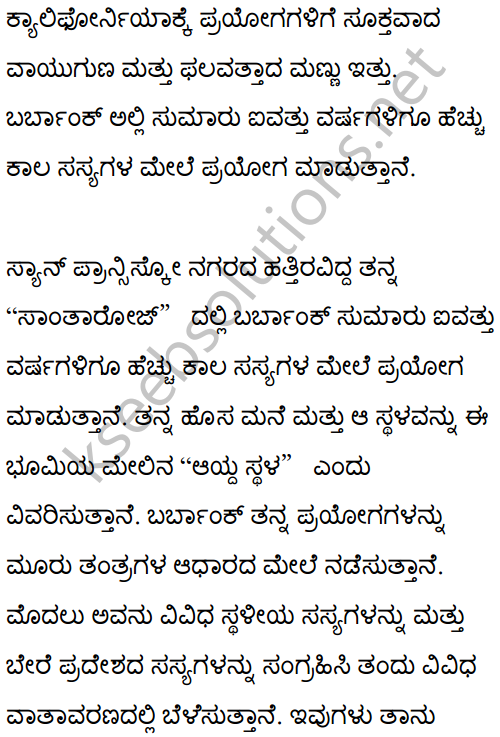 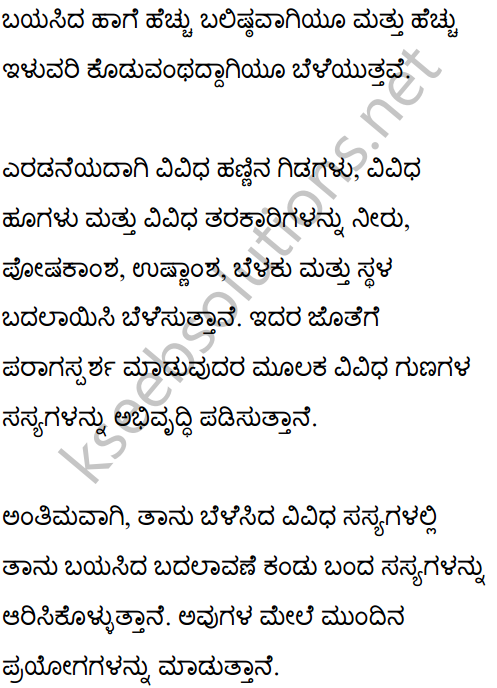 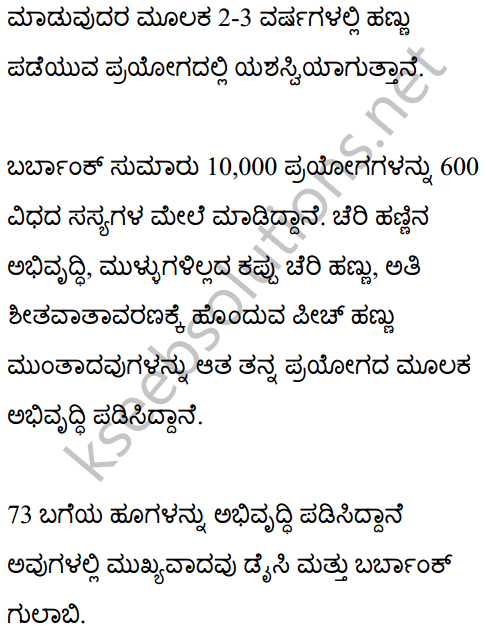 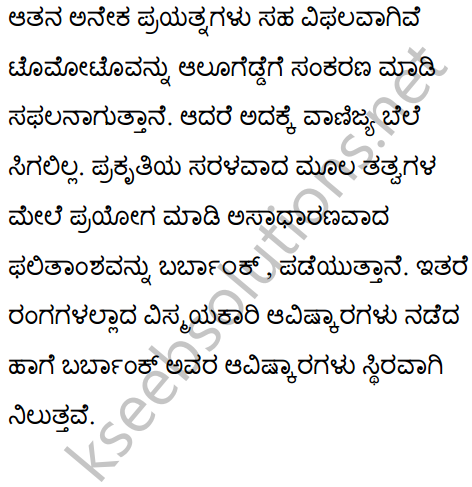