l. Answer the following questions and share your responses with your partner.

Question 1.
What does the poet remind us of, in the first line of the poem?
Answer:
The poet reminds us that “no men are strange and no countries are foreign”. He says that we are all ‘one’ though appearances are different.

Question 3.
What are the two bad effects of war? Read lines from 16 to 19 and answer.
Answer:
Warpollutes not only human mind but also the whole earth. It destroys the man and world. Arms destroy the pure environment in which we live happily.

II. Read and discuss your responses with your partner. Then write.

Question 1.
How do you think we are all treated alike by nature?
Answer:
The land in which we live is the same for all. All of us are using and benefiting from sunlight, air and water. These are the gifts of nature and same to all the people of the world.
Like this, nature treats all alike by providing these gifts for the survival of mankind.

Question 2.
Read the third stanza carefully. What message does the poet want to convey to us?
Answer:
People of other countries are having the same type of eyes and strength. Their strength can be won by love only. We should not try to win them by war. Life is common in every land that all can recognize and understand. The Poet conveys the message of peace and love that wins the hearts of others.

Question 3.
Do you agree with the poet that we should wage no war? How do you justify that?
Answer:
Yes, I agree with the poet that we should not wage a war. We the people are living in different parts of the world. For our betterment we form countries in which we are living. We are having same physical features, common life, using same land, light and water. If we hate each other, there is no peace of life. War kills our own mankind. Innocent people suffer a lot. War pollutes land, air and water which are very necessary for life. War brings untold miseries to humans. So, we should not wage wars.

Question 5.
Briefly describe how a war spoils everything.
Answer:
Poet describes the bad effects of war and gives us a message of universal brotherhood. War creates hatred among the people. It arrests the peace of life. Love, peace and brotherhood disappear from the minds of the people. Man starts to disposses, betray and condemn other. It spoils the land, air and water in which we live because of using nuclear bombs. War causes destruction of life and property on a very large scale. It brings untold miseries to mankind. War vanishes the idea of universal brotherhood.

I. Four alternatives are suggested below each incomplete statement/question. Choose the most appropriate one:

Question 3.
“Strength” of others can be conquered by:
a. War
b. Love
c. Hatred
d. force
Answer:
b. Love

Question 4.
Poet says that there is a common in every land that all can recognize and understand. The Common is
a. Work
b. Uniform
c. Life
d. War
Answer:
c. Life

II. Read the following extracts and answer the questions that follow:

Question 1.
Remember, no men are strange, no countries foreign
Beneath all uniforms, a single body breathes.
a. Who says this?
Answer:
The Poet says this.

b. Who is this remind to?
Answer:
This is reminds us. (reader).

c. What is the meaning of this sentence?
Answer:
All are one though appearances are different.

Question 2.
“They have eyes like ours that wake or sleep, and strength that can be won by love”.
a. Who does ‘t hey’ refer?
Answer:
‘They’ refers to people of other countries.

c. How can strength be won?
Answer:
Strength can be won by ‘Love’.

Question 3.
“Remember, we who take arms against” each other.
It is the human earth that we defile.
a. Who is the ‘we’?
Answer:
We refers to people of the world.

c. What does the poet remind us?
Answer:
Poet reminds that we defile the human earth if we engage in wars. We should not take up arms against each other.

Question 1.
What does the poet mean by beneath all uniforms a single body breathes?
Answer:
Poet means that all are one though appearances are different.

No Men are Foreign Poem Summary in English

In this poem, the poet gives us the message about universal brotherhood.
The Poet reminds us that no men are strange and no countries are foreign. All are one though the appearances are different. The poet says that the people of other countries are our brothers and they walk upon same type of land. We all die on the same kind of earth.

People of other countries also know the value and use of sunlight, air and water. These are same for all. They know the difficulties and sufferings of war. So they like to live in peace not hatred. Their hands, their reading books, their works are not different. All are same.

The Poet reminds us that their eyes, strength and life are same. We can win the strength of the people of other countries only by love. We cannot win them by any other show of strength like war. Life is common in every country. All can recognize and understand the life of others.

The poet reminds us that whenever we are told to hate our brothers from other countries, in truth we dispossess, betray and condemn ourselves only. We should remember that we should not hate people of other countries.

We should not forget that we destroy and pollute our own human earth if we fight against each
other. War creates hatred among the people. It kills the people. It not only pollutes the hearts and minds of the people but also the earth, air and water in which we are living. War destroys peace and brotherhood.

So, the poet says that we should remember to develop peace, harmony and brotherhood. Once again he reminds us that no men are foreign and no countries strange.

No Men are Foreign Poem Summary in Kannada 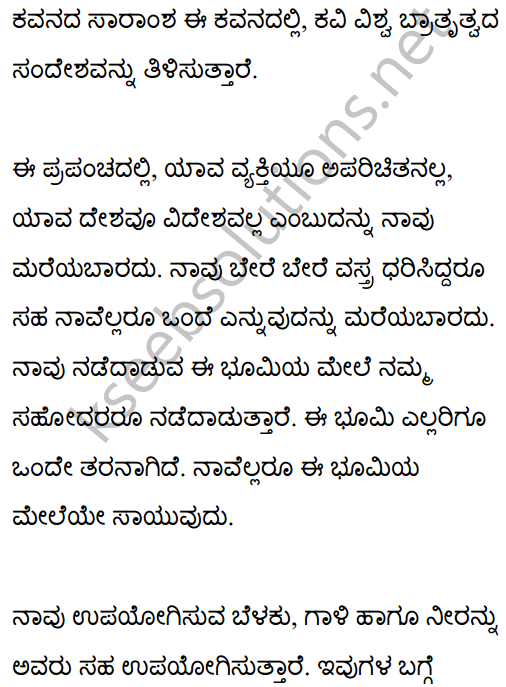 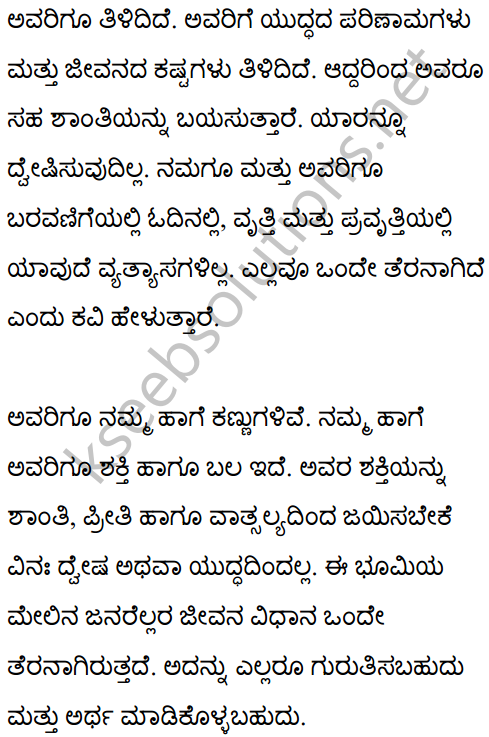 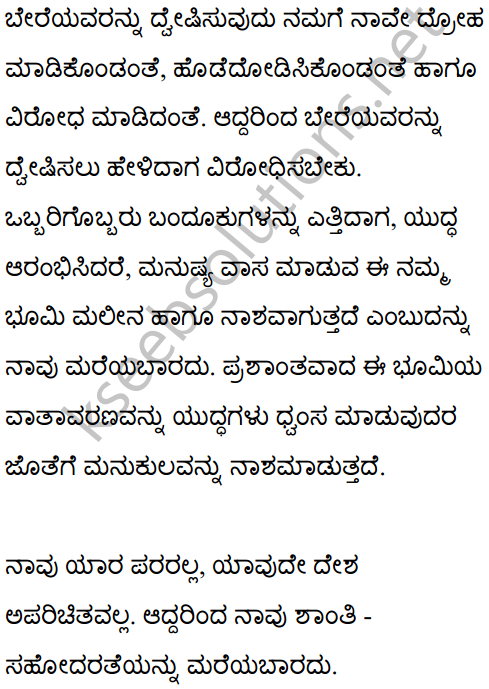 No Men are Foreign Poem Word in English