I. Answer each of the following questions in a sentence or two.

Valentina travelled successfully in the spaceship, Vostak VI round the earth at 18000 miles an hour. She won the credit of being the world’s first space woman. It was a great event.

Question 2.
How did Valentina help her mother? What else was she doing at the same time?
Answer:
Valentina went to work at a tyre factory and then at a textile mill to help her mother to maintain the family. At the same time, she attended some classes at Yaroslov. In 1960, she graduated from a trade school.

Question 4.
What did she say on landing after the space flight?
Answer:
Valentina said that it was very nice to be a guest but it was always better at home and she felt joy at being home again when she landed.

Question 5.
Apart from flying, what were Valentina’s hobbies?
Answer:
She was interested in music and literature. She loved reading.

II. Answer each of the following in a paragraph of about 80-100 sentences each.

Question 1.
Imagine you are asked to interview Valentina Tereshkova. Prepare a list of questions you would like to ask her.
Answer:

Valentina was influenced by Yuri Gagarin. Kalpana Chawla had a high regard for J.R.D. Tata. He was her role model. Both of them went round the earth in space and made the observation of earth and gave information from the space.

Question 3.
What do you think youngsters like you can learn from the life of Valentina Tereshkova? Discuss and write.
Answer:
Valentina came from a poor family. She . was a village girl. Her father was a driver. He died at the front during World War II. Valentina could not, get smooth and continuous education. She worked in a tyre factory and later at a textile mill to help her mother maintain the family.

At the same time she attended some night classes and graduated in a trade school, she had got training in parachute jumping and later got cosmonauts training. Later she became first woman cosmonaut in the world.

Valentina was not just strong and fit, but had all the soft and nice qualities of a women. She was interested in music, literature and reading. These are admirable qualities and should be imitated by us.

I. Four alternatives are given below each question. Choose the correct one:

Question 3.
The name of the spaceship in which Valentina travelled
(a) Sputnik
(b) Rover
(c) Vostok-VI
(d) Endeavour
Answer:
(c) Vostok-VI

Question 6.
The river that looked beautiful from outer space was
(a) Rhine
(b) Danube
(c) Volga
(d)Nile
Answer:
(c) Volga

The First Woman in Space Lesson Summary in English

It is a life story of Valentina Tereshkova, the first woman cosmonaut of the world.

June 16, 1963 was a memorable day because Valentina Tereshkova of Soviet Union travelled successfully in the spaceship, Vostok-VI round the earth at 18,000 miles an hour and won the credit of being the world’s first space woman.

Valentina was a village girl of humble birth. But she made a great achievement in space travelling and became the first woman cosmonaut.

Valentina was born on March 6, 1937 at the village of Maselennikovo. Her father was a tractor driver. He died at the war front during World War II. The family was passing through many difficulties of poverty. Therefore Valentina could not have a smooth and continuous schooling. She went to work at a tyre factory and then at a textile mill to help her mother to maintain the family.

At the same time, she attended some classes at Yaroslov and graduated in a trade school. Later she underwent the training of parachute jumping and cosmonauts training. She was influenced by Yuri Gagarin and started to dream of sailing on a “magic carpet”. Then she was admitted to space school and this proved the way for her great expectation.

With her keen interest and persistent efforts, she soon progressed ahead of all her fellow trainees. She learnt with earnestness and hard work all about rockets. After moths of vigorous training, she was chosen to fly into outer space.

The day was fixed for her taking off. Every minute things went with clock-like accuracy according to plan. It was the proudest moment of her life when she talked from outer space to millions of her fellowmen on the earth. Crowds of people all over the world simply danced for joy of her success.

From those heavenly height, she saw the cloud covered earth and at times she could recognize the landscape too. River Volga looked beautiful from outer space. She felt quite normal even while going at that unimaginable speed. She remained in that spaceship speeding round and round for three days. Thus she showed to the world that a woman has better stamina and endurance than a man.

She made observations, wrote down notes and sent news to earth. While returning to earth, she steered the ship herself very well and landed by parachute in Soviet Central Asia. She told about her flight that it was very nice to be a guest but it was always better to be at home.

When she landed, she felt joy being at home again. She was very happy over her success in the space experiment. She proved that women could also withstand the rigorous strains of rocket flight and weightlessness.

Valentina was interested in music, literature and reading. She loved a happy and quite home life.
Valentina’s space flight will be recorded in the history of civilization as one more triumph of the human spirit.

The First Woman in Space Lesson Summary in Kannada 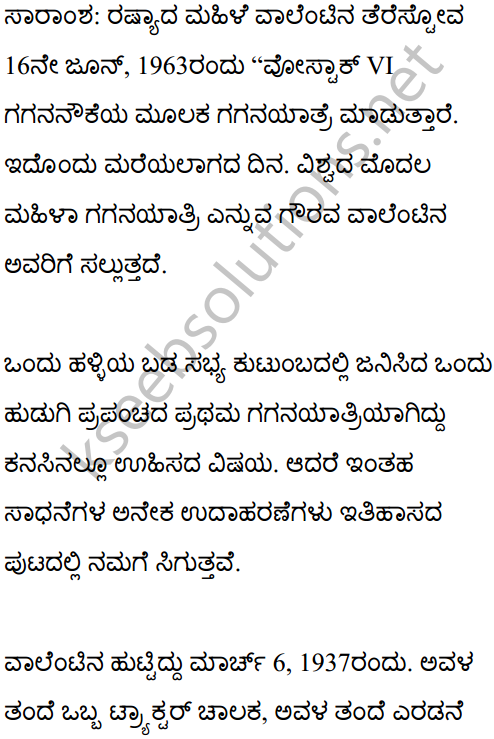 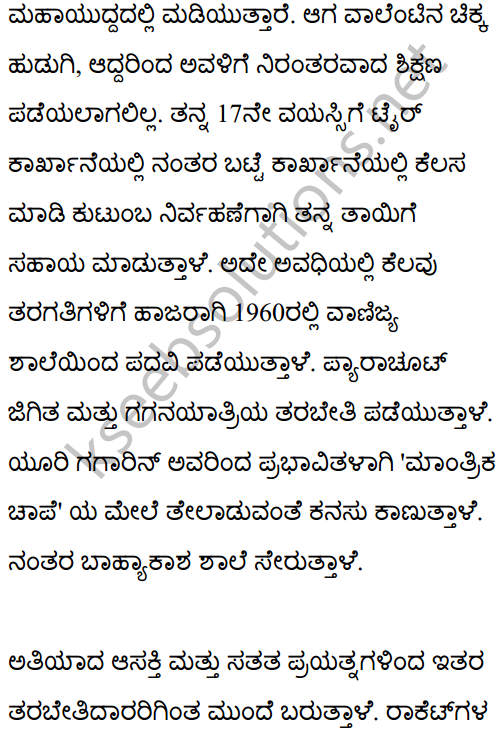 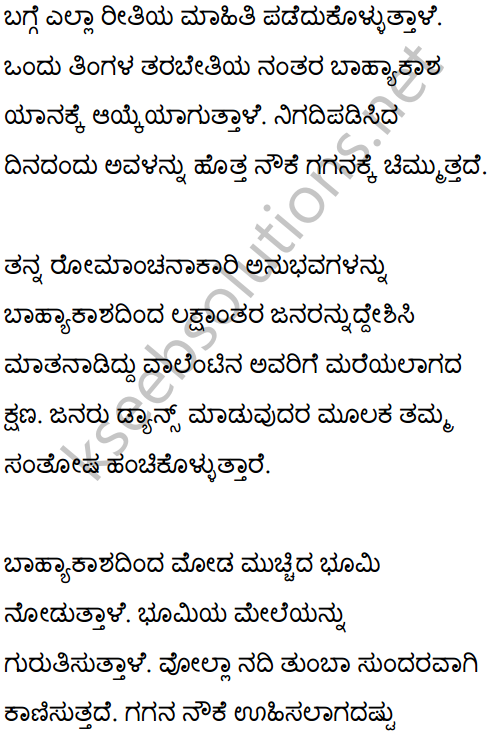 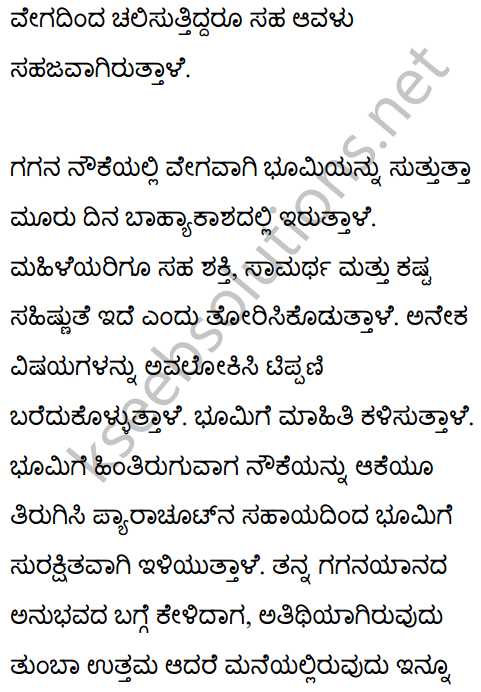 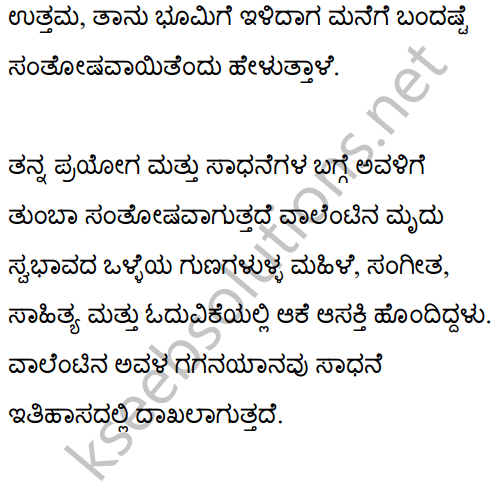 The First Woman in Space Lesson Word in English