Question 2.
List out the reproductive events in humans. Any four?
Answer:
It includes the following.

Question 4.
What is implantation?
Answer:
Attachment of embryo to the endometrial wall of uterus is termed as implantation 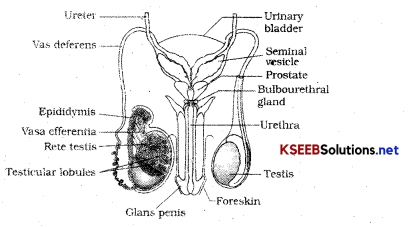 Question 7.
Describe the male reproductive system?
Answer:
It is located in the pelvic region and consists of

1. The testes are situated outside the abdominal cavity within a pouch termed as scrotum. Scrotum helps in maintaining low temperature of the testes (2-2.5°c lower than normal internal body temperature. The testis is oval in shape, contains 250 compartments called testicular lobules. Each lobule contains 1-3 highly coiled seminiferous tubule in which sperms are produced. Each seminiferous tubule is lined on inside by 2 types of cells male germ cells, spermatogonia, sertoli cells.

3. Male accessory glands include paired seminal vesicles, a prostrate gland and a paired bulbo urethral glands secretions of which comprise seminal plasma which is rich in fructose, calcium and certain enzymes.

4. External genitalia is penis which is made up special tissue which helps in erection of penis to facilitate insemination. Enlarged end of penis is glans penis opened by foreskin.

Question 10.
Give the function of scrotum?
Answer:
It helps in maintaining low temperature of testes (2-2.5°c lower than normal internal body temperature). 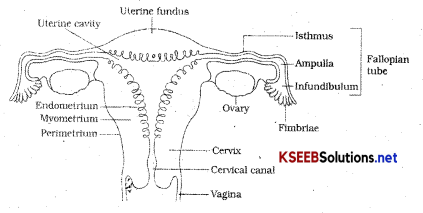 Ovaries are the primary female sex organ which produces the female gamete or ovum and several steroid hormones. Each ovary is 2 – 4cm in length and connected to the pelvic wall and uterus by ligaments.

Oviducts (fallopian tubes), uterus, vagina constitute the female accessory ducts. Each fallopian tube is 10-12 cm long and it extends from periphery of each ovary to uterus.

The part closer to the ovary is infundibulum which contains finger like projections termed as fimbriae which helps in collection of ovum after ovulation. Infundibulum leads to a wider ampulla which leads to a narrow Isthmus which is the last part of oviducts and it joins the uterus. Uterus is single and also called womb shape is like inverted pear. Uterus opens into vagina through narrow cervix. Cavity of cervix along with vagina forms birth canal. Uterus has 3 layers outer thin perimetrium, middle muscular myometrium and inner glandular layer endometrium.

Question 14.
Name the finger like projections present in the ovary at the end of infundibulum?
Answer:
Fimbriae.

Question 15.
What is the other name for oviduct?
Answer:
Fallopian tube.

Question 16.
What are the 3 parts of fallopian tube?
Answer:
Infundibulum, Ampulla, Isthmus.

Question 17.
Give the other name for uterus?
Answer:
It is termed as womb.

Question 20.
Draw a sectional view of the mammary gland?
Answer: 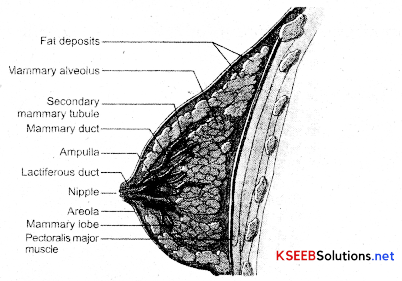 Question 22.
What are the 2 types of gametogenesis?
Answer:
They are:

Question 23.
What is Spermato genesis?
Answer:
The process of production of sperms in the male gonad or testes is spermatogenesis.

Question 24.
Define oogenesis?
Answer:
The process of formation of mature female gamete or ovum in the female gonad or ovary is oogenesis.

Question 26.
What is Spermiation?
Answer:
Sperm heads become embedded in sertoli cells and are released from seminiferous tubules by the process of Spermiation.

Question 27.
What is semen?
Answer:
Seminal plasma along with sperms constitute semen.

Question 28.
Give a detailed account of spermatogenesis?
Answer:
The spermatogonia which is found on inner wall of seminiferans tubule multiply by mitotic division and contain 46 chromosomes. It enlarges to form primary spermatocyte which undergoes Ist Meiosis to form 2 secondary spermatocytes which are equal in size and contains 23 chromosomes.

The secondary spermatocytes undergo the second meiotic division to form four equal haploid spermatids. Spermatids are transformed into sperms by spermiogenesis. Sperms are released from seminiferous tubules by the process called spermiation.

Question 29.
Give an account of hormonal control of spermatogenesis?
Answer: 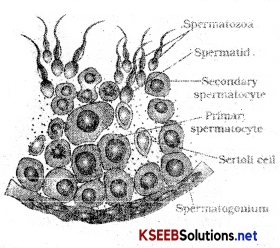 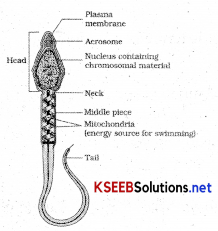 Question 31.
Describe the structure of human sperm
Answer:
It is a microscopic structure and it is composed of a head, neck a middle piece and tail. Plasma membrane envelops whole body of sperm. Sperm head consists of a haploid nucleus and it is covered by cap like structure termed acrosome. Acrosome is filled with enzymes which help in the fertilisation of ovum. Middle piece possess mitochondria which produce energy for movement of tail. Human male ejaculates about 200 to 300 million sperms during coitus. Secretions of epididymis, vas deferens, seminal vesicle and prostrate are essential for maturation and motility of sperms.

Question 32.
Describe the process of Oogenesis with a schematic representation.
Answer:
The process of formation of mature female gamete is termed as oogenesis, Oogonia are formed within each foetal ovary no more oogonia are formed and added after birth. These cells enter prophase I of meiosis I and get arrested at primary oocyte stage, primary oocyte gets surrounded by layer of granulosa cells and is called primary follicle. The primary follicle gets surrounded by more layer of granulosa cells and forms secondary follicle. Secondary follicle gets converted to tertiary follicle which has a fluid filled cavity called antrum.

The reproductive cycle in the female primates (Eg. monkeys, apes and human beings is termed as menstrual cycle.

Question 34.
Define ovulation?
Answer:
Release of ovum/secondary oocyte from the Graafian follicle is termed as ovulation.

Question 35.
What is the function of corpus luteum?
Answer:
It secretes large amount of progesterone which is essential for maintenance of endometrium.

Question 36.
Ovulation takes place on the 14th day of menstrual cycle why?
Answer:
Graafian follicle matures and ruptures usually on the 14th day due to rapid secretion of L H or L.H surge.

Question 37.
Define menopause?
Answer:
In human beings menstrual cycle ceases around 50 years of age and it is termed as menopause.

Question 40.
What is menstrual cycle. Explain each events?
Answer:
The cycle of events starting from one menstruation till the next one is called as the menstrual cycle. Cycle starts with menstrual phase, where menstrual flow occurs and it lasts for 3-5 days. Menstrual flow is due to the breakdown of endometrial lining of uterus and its blood vessels which forms liquid that comes out through vagina. Menstruation occurs only if the released ovum is not fertilised. Lack of menstruation indicates pregnancy but stress, poor health may also lead to it.

The second phase is follicular phase during which the primary follicles in the ovary grow to become fully mature Grafian follicle and the endometrial lining of uterus regenerates. These changes in ovary, uterus are accompanied by changes in pituitary and ovarian hormones. L.H and F.S.H hormone increase in levels during the follicular phase and help in follicular development.

During ovulatory phase which occurs at the mid-cycle there is a surge in L.H. hormone secretion which induces rupture of Graafian follicle and the release of ovum (Ovulation). 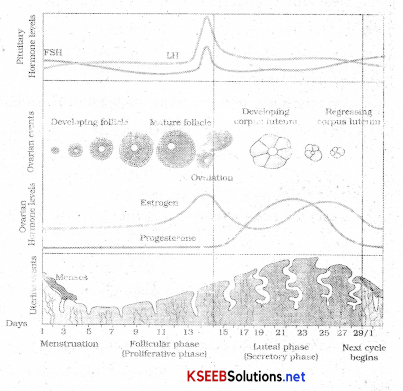 After ovulatory phase is the luteal phase where the remaining parts of Graafian follicle transforms as corpus luteum. Corpus luteum secretes large amount of progesterone which is essential for maintenance of endometrium.

Endometrium is essential for implantation of fertilised ovum and other events of pregnancy.

In the absence of fertilisation corpus luteum degenerates, endometrium disintegrates leading to menstruation. Thus there is marking of a new cycle.

During copulation semen is released by penis into vagina of the female. This process is termed as insemination. Motile sperms swim pass through cervix, then enter uterus and finally reach the ampullary isthmus junction of fallopian tube. Ovum released by ovary also reaches the ampullary isthmic junction and this is the place where fertilisation takes place. Process of fusion of sperm with an ovum is called fertilisation. During fertilisation, a sperm comes in contact with the zone Pellucida layer of the ovum. A change in membrane occurs and entry of more sperms is blocked. Thus it ensures only 1 sperm can fertilise an ovum. The acrosome of sperm secretes certain enzymes which helps the sperm to reach the cytoplasm of the ovum. The meiotic division of secondary oocyte is completed and there is formation of a haploid ovum and a second polar body.

Sperm and ovum fuse to form a diploid zygote.

Sex determination of a child:

Question 41.
What is the process of sex determination in humans termed as?
Answer:

The mitotic division starts as the zygote moves through the isthmus of the oviduct called cleavage towards the uterus and forms 2, 4, 8, 16 daughter cells called blastomeres.

The chorionic villi and uterine tissue become interdigitated with each other and jointly form a structural and functional unit between the developing embryo (foetus) and maternal body called the placenta.

Question 42.
Define cleavage.
Answer:
The zygote undergoes repeated mitotic division at the ampullary-isthmus junction of the oviduct and it is termed as cleavage.

Question 44.
What is implantation?
Answer:
Blastocyst becomes embedded to the endometrium of uterus termed as implantation.

Question 45.
What is morula?
Answer:
Embryo with 8-16 blastomere is called morula.

Question 46.
Define placenta?
Answer:
The placenta is an organic connection between maternal tissue and foetus through which physilogical exchange takes place.

Question 48.
What are the functions of placenta 2?
Answer:

Question 52.
What is colostrum 2?
Answer:
Milk produced during the initial few days of lactation is termed as colostrum which contains several antibodies essential to develop resistance in newborns. 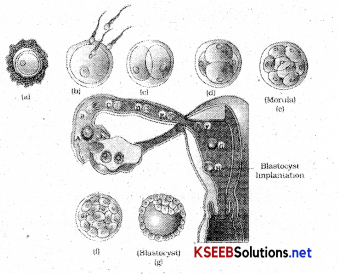 Question 54.
Define Cleavage?
Answer:
The zygote undergoes repeated mitotic division when it is at the isthmus of the oviduct and it is termed as cleavage.

Question 55.
Define Placenta?
Answer:
The placenta is an organic connection between maternal tissue and fetus through which physiological exchange takes place.

Question 56.
What is Colostrum?
Answer:
Milk produced during the initial few days of lactation is colostrum which contains several antibodies necessary to develop resistance against diseases.

Question 62.
What is parturition?
Answer:
Rigorous contraction of the uterus at the end of pregnancy leading to delivery of the fetus is called parturition.

Question 63.
What are stem cells.
Answer:
Inner cell mass contains cells called stein cells which have the potency to give rise to all tissues and organs.

→ Embryonic Development:
Immediately after implantation the inner cell mass differentiates into outer layer called ectoderm and inner layer called endoderm. Mesoderm appears in between outer ectodeim and inner endoderm and all these three layers gives rise to all tissues in adults.

(March 2015) Signal of parturition originate from fully developed foetus and placenta induces mild uterine contractions termed as foetal ejection reflex and triggers the release of oxytocin from maternal pituitary oxytoin causes rapid uterine contractions and is preferred for parturtean.
The mammary glands of the female undergo differentiation during pregnancy and produce milk towards the end of pregnancy termed lactation. Milk produced during initial few days of lactation is termed as colostrum which contains several antibodies essential to develop resistance for new bom babies. 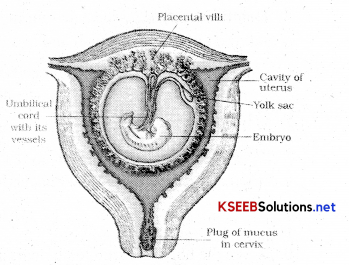