Question 3.
Define convergent evolution.
Answer:
The development of functionally similar structures in unrelated organisms due their adaptation to a, similar environment.

Question 5.
What is micro-propagation?
Answer:
Production of large number of plants through tissue culture within a short span of time.

Question 6.
What are Floes?
Answer:
Masses of bacteria associated with fungal filaments to form mesh like structures during secondary treatment of effluent is called floes.

Question 9.
Why Western Ghats are considered as one of the biodiversity hot spots?
Answer:
It has high level of species richness.
OR
It has high degree of endemism.

Question 10.
“Some animals, if unable to migrate, might avoid the stress by escaping in time”. Justify the statement citing one example.
Answer:
Animals which are unable to migrate might suspend or slow down their metabolic activities to escape the stress in time.
OR 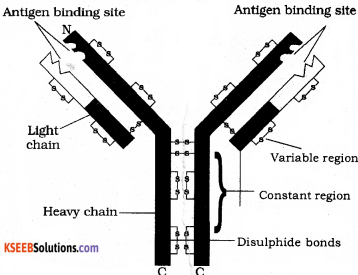 Question 15.
List the objectives of biofortification.
Answer:
Breeding crops with 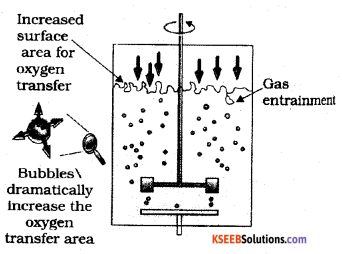 Question 17.
Write a note on Co – extinction.
Answer:
Extinction of one species invariably leads to extinction of another when they are associated with each other in an obligatory way.
Example : When host species is extinct, obligate parasites dependent on it also die.

iii) The plant that flowers once in twelve years.
Answer:
Bamboo 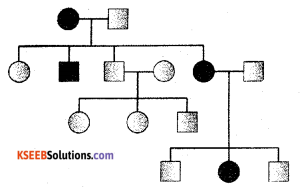 2. Doctrines of desires and appetency
New organs or variations appear due to wish.

3. Use and disuse of organs
The development of organs and their use are proportional to the activities of the organs.

4. Inheritance of acquired characters
New characters or variations acquired by an organism in its life time are preserved and pass on to future generations.

5. Speciation
Variations accumulate in organisms over generations and lead to speciation.

b) Write the scientific name of man like primate who probably lived in East African grasslands about 3-4 million years ago.
Answer:
Ramapithecus

Question 23.
Describe the effects of drug abuse.
Answer:
The harmful effects of alcohol or drug abuse are as follows:

Question 24.
Write a note on downstream processing.
Answer:
The various processes involved in the separation, purification and recovery of biosynthetic products, particularly pharmaceuticals, from natural sources such as animal or plant tissue or fermentation broth or other industrial processes are collectively called downstream processing.

Question 27.
Explain how some plants are adapted for achieving pollination through wind. How Vallisneria and Seagrasses achieve pollination?
Answer:
Pollination brought about by the agency of wind is called anemophily. 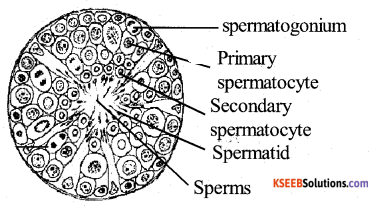 Question 29.
What is infertility? How infertility is treated by assisted reproductive technologies like IVF – ET and ZIFT?
Answer:
1. Inability of a couple to produce children in spite of unprotected sexual cohabitation
OR
2. Inability of a couple to conceive or produce children even after 2 years of unprotected sexual cohabitation.

1. In vitro fertilization and embryo transfer (IVF-ET)
In this technique egg cells are fertilized by sperm (usually 100,000 sperm / ml) outside the body in almost similar conditions as that in the body.

In this process Ova from the wife or donor female and sperm from husband or donor male are allowed to fuse in shallow containers called Petri dishes. (Made of glass or plastic resins) under laboratory condition.

The fertilized egg (zygote) is then transferred to the patient’s uterus, is this called embryo transfer (E.T.), Where she provides suitable conditions for the development of embryo. The baby born by this technique is called test tube baby.

2. ZIFT ( Zygote intra fallopian transfer)
Zygote or early embryo up to eight blastoineres is transferred into the fallopian tube.

Question 30.
What are the salient features of double helical structure of DNA?
Answer: 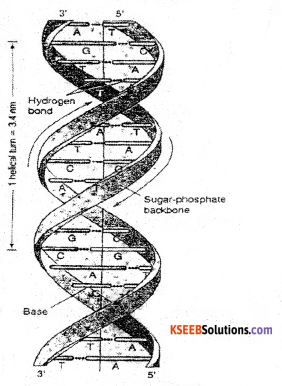 The duplex model of DNA was proposed by J.D Watson and F.H.C Crick based on the x- ray diffraction data obtained by Rosalind Franklin and Wilkins J (1953). Watson and Crick along with Wilkins were awarded Noble Prize in 1962.
According to this model:

Meselson and Stahl conducted experiments on E.coli to prove that DNA replication is semi conservative.

Question 32.
Discuss the contribution of Sutton and Boveri by making a comparison between the behaviour of chromosomes and genes during meiosis, to explain Mendel’s Laws.
Answer:

Wheat and Rice :
In 1963, several semi dwarf varieties of wheat such as Sonalika and Kalyan Sona, which were high yielding and disease resistant, were introduced all over the wheat – growing belt of India.

Sugar cane :
Saccharum barberi was originally grown in north India, but had poor sugar content and yield. Tropical canes grown in south India Saccharum officinarum had thicker stems and higher sugar content but did not grow well in north India. These two species were successfully crossed to get sugar cane varieties combining the desirable qualities of high yield, thick stems, high sugar and ability to grow in the sugar cane areas of north India.

Millets:
Hybrid maize, jowar and bajra have been successfully developed in India. Hybrid breeding have led to the development of several high yielding varieties resistant to water stress.

Cow pea (Pusa comal) is a hybrid variety developed by conventional breeding methods such as hybridization and selection. It is made resistant to blight disease caused by bacteria.

ii) Micorrhiza as biofertilizers
1. It is a symbiotic association of fungus with the roots of higher plants.
Example : Gomus species form mycorrhiza; Fungal symbiont absorbs phosphorus from soil and made available to plants.
2. This association also makes the plant to show resistance to root borne pathogens, tolerance to salinity and drought thereby increase in growth and development.

b) Name a free – living bacterium that is used as biofertilizer.
Answer:
Azotobacter or Azospirillium are free living bacteria fix atmospheric nitrogen.

Question 36.
a) Explain how Mediterranean orchid achieve pollination.
Answer:
Orchids show diversity of floral patterns to attract the right pollinator insect and ensure guaranteed pollination by it. The Mediterranean orchid Ophrys employs sexual deceit to get pollination done by a species of bee, one petal of flowers show resemblance to the female of the bee in size and colour markings, the male bee is attracted to what it perceives as a female pseudo copulates with the flower and during that process is dusted with pollen from the flower, when the same bee pseudo copulates with another flower it transfers pollen to it and thus, pollinates the flower.

b) Draw a graph showing biome distribution with respect to annual temperature and preciptiation.
Answer: 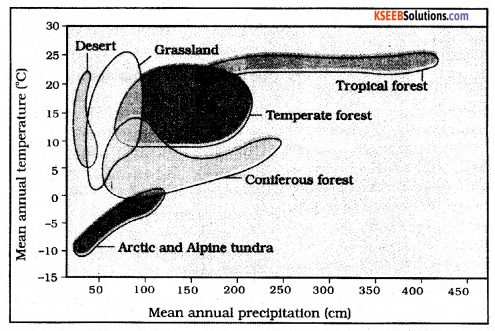 Question 37.
Describe the participation of people in the conservation of forests in India by taking Bishnoi community incident and Chipko movement as examples. Add a note on Joint Forest Management.
Answer:
A case study of people’s participation in forest conservation