→ Reproduction is one of the important characteristics of life. It is defined as a biological process in which an organism give rise to young ones (offsprings) similar to itself. The off-springs grow, mature and in turn produce new offsprings. Thus, there is a cycle of birth, growth and death. Reproduction is necessary for the continuation of life and to compensate for the loss of life due to death.

The production of offsprings by single parent without the formation and fusion of gametes is called asexual reproduction. It is also known as agamogenesis or agamogeny.

Note: However, members of a clone may differ genetically when there is mutation (a sudden heritable change).

2. Multiple Fission: In this process, the parent body divides into many daughter organisms. Multiple fission occurs in amoeba, plasmodium, monocystis (all protozoans).

3. Encystation & Sporulation: Under unfavourable conditions amoeba withdraws its pseudopodia and secretes a three layered hard covering or cyst around itself. This phenomenon is termed as encystation. When the favourable conditions return, the encysted amoeba divides by multiple fission and produces many pseudopodiospores. Finally by the breakdown of cyst wall the spores are liberated into the surrounding medium to grow up into many amoebae. This phenomenon is known as sporulation.

4. Exogenous Budding: In this process, a daughter organism is formed from a small projection, the bud, arising from the parent body. An outgrowth or bud grows externally on the surface of the body. The bud may split away from the parent and take up an independent existence as in Hydra or it may remain attached and become a more or less independent member of the colony as in Sycon.

In yeast, the cell division is unequal and results in a large cell and a small cell, called bud which remains attached to the large cell; the bud gets separated and grows into an adult yeast.

5. Gemmule Formation: In fresh water sponges (e.g., spongilia) and a few marine sponges (except in Sycon), buds are formed within the parents body. They are called gemmules
(= internal buds).

6. Zoospores: The members of the Kingdom Fungi and simple plants such as algae (e.g., Chlamydomonas) reproduce through special motile reproductive structures called zoospores) 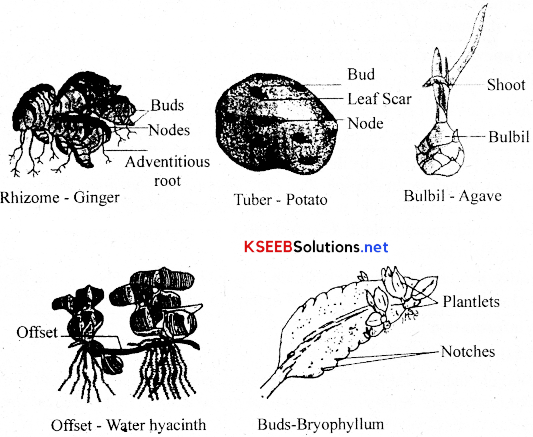 A number of perennial plants propagate vegetatively in nature. Different vegetative parts such as roots, stems and leaves are variously modified to help in vegetative propagation in these plants.

1. Vegetative propagation by roots: The intact roots of many woody plants (such as Murraya sp., Albizia lebbek, Guava, Dalbergia sissoo), which are growing just below the ground develop adventitious buds. The buds put out shoots and produce new plants.

The roots of plants like sweet potato, dahlia, asparagus, dioscoria (yam), tapioca etc., are tuberous and store abundant of food materials. They bear adventitious buds and provide a means of vegetative propagation. The buds present on the roots grow into leafy shoots called slips. The young slips are detached from parent plants and grow separately.

2. Vegetative propagation by stems: In many plants, stem is the source of natural vegetative propagation.
It is of various types-Sub-aerial or creeping stems like runners (e.g., Cyndron – lawn grass), suckers (e.g., mint chrysanthemum), stolons (e.g., Fragaria – strawberry), offset (Eichhoria – water hyacinth) produce new shoots or crowns, which may break and give rise to independent plants.

Nice to know: Water hyacinth is an aquatic plant and is one of the most invasive weeds growing in standing waters. It is popularly known as ‘terror of Bengal’.
It drains oxygen from the water which leads to death of fishes. It can propagate vegetatively at a phenomenal rate and spread all over the water body in a short period of time.

3. Vegetative propagation by leaves : Leaves are not a common mean of vegetative propagation in nature. In Bryophyllum diagremontianum, plantlets develop from the buds present on the marginal notches of the intact leaves. These plantlgts become detached arid develop into independent plants. On other species of Bryophyllum and Kalanchoe, new plants arise only when leaf is injured or detached.

4. Vegetative propagation through bulbils: Bulbils are fleshy buds, which develop into new plants after falling on the ground, e.g., Dioscorea, oxalis, pineapple.

1. Cutting: ‘The division of a portion of any plant organ such as stem, root or leaf used for vegetative propagation is called cutting. Stem cuttings are most commonly used for this purpose.
e.g. Sugarcane, grapes, cocoa, rose, bougainvillea, duranta and carnations etc.
Note: Stem cutting of some plants do not produce roots readily and have to be treated with a root promoting hormone such as IBA and NAA etc.

3. Grafting: It is a method of joining two different plants, so as to make them grow as one composite unit. Here, a twig from one plant is transplanted to a rooted plant of a different variety, of the same species. This brings organic connection between the two, bringing in best qualities of both. The branch that is inserted is known as graft or scion and the plant that is rooted to the soil is called stock.

Vegetative propagation has a number of advantages. Some of these are as follows.
1. Vegetative propagation is the only known method of multiplication in plants like banana,
seedless grapes and oranges, rose and jasmine that have lost their capacity to produce seeds through sexual reproduction.

2. Plants like bermuda grass or doob grass (Cynodoridactylon), which produce only a small quantity of seeds are mostly propagated vegetatively.

3. Vegetative propagation is a more rapid, easier and a less expensive method of multiplying plants which have either poor seed viability or prolonged seed dormancy.

4. It also helps us to introduce plants in new areas where seed germination fails to produce plants due to change in the soil and environmental conditions.

5. The greatest advantage of vegetative propagation is that all plants produced will have the same characters and hereditaiy potential as the parent plants. It is not possible in the plants raised from seeds, since they contain blended characters of both the parents.

6. Grafting permits the physical and physiological joining of separate individuals for the best economic advantage i.e., good qualities of two varieties can be combined in one composite plant.

7. The good qualities of a race or variety can be preserved indefinitely.

2. Differences between asexual and sexual reproduction

Similarities in pattern of sexual reproduction:

1. Juvenile/vegetative Phase: All organisms have to reach a certain stage of growth and maturity in their life, before they can reproduce sexually. In animals, this period of growth is called the juvenile phase, while in plants it is known as vegetative phase.

3. Flowering/breeding seasons: There are some plants which flower throughout the year, while some others show seasonal flowering i.e., they flower during the same month year after year. A few plants exhibit unusual flowering phenomenon.
e.g: Bamboo species flower only once in their life time generally after 50-100 years. Strobilanthus kunthiana(neelakuranji) flowers once in 12 years.
Most animals do not breed throughout the year, instead they are seasonal breeders. For instance, birds living in nature lays eggs only seasonally.

4. Senescence (Aging): After reproductive maturity, all organisms enter into a senescent phase. This phase is characterised by gradual decrease in functional activities and cellular breakdown leading to the death of the organism.

1. Gametogenesis: Gametogenesis is the process by which male and female sex cells or gametes are formed. Gametes are haploid cells. In some algae, the two gametes are similar in appearance (morphology) and are Called homogametes (=isogametes),. Such gametes cannot bp distinguished into male and female gametes. However, in majority of sexually reproducing organisms the gametes formed are of two morphologically distinct types, called heterogametes. In such organisms, the male gamete is called the antherozoid or sperm and the female gamete is called the egg or ovum.

Sexuality in organisms: Organisms exhibit different strategies regarding their sexuality.

Plants may have both male and female reproductive structures in the same plant i.e. bisexual or homothallic or on different plants i.e., heterothallic or dioecious. 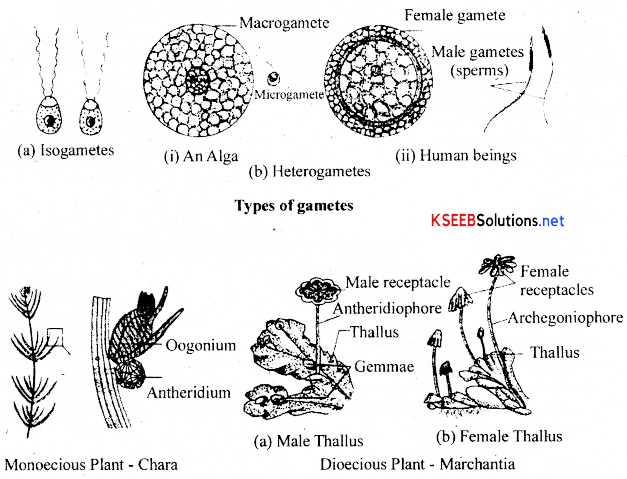 2. Gamete transfer: When the male and female gametes are formed, they are physically brought together so as to facilitate their fusion. In most of the organisms, the male gamete is motile, whereas the female gamete is hon-motile or stationary.

In several simple plants like algae, bryophytes and pteridophytes, water is the medium through which gamete transfer takes place.

The fusion of gametes is called syngamy or fertilization. It results in the formation of a diploid zygote.

Note: In liver fluke and some insects (e.g., gall fly), the larva produces a new generation of larvae by parthenogenesis. It is called paedogenetic parthenogenesis (Paedogenesis).

In many organisms which occur in aquatic habitats (e.g., algae, fishes and amphibians) syngamy occurs outside the body of the organism in the external medium i.e., in water. This type of gametic fusion is called external fertilization.

In most of the terrestrial organisms such as fungi, higher animals (such as reptiles, birds, mammals) and in a majority of plants (bryophytes, pteridophytes, gymnosperms and angiosperms). Syngamy occurs inside the body of the organism. This type of gametic fusion is called internal fertilization.

The events in sexual reproduction that occur after the formation of zygote are called post-fertilization events.

1. The zygote: In all sexually reproducing organisms, a diploid zygote is produced as a result of fertilization. Later, the zygote produces a new individual.

2. Embryogenesis: The process of development of embryo from zygote is called embryogenesis. During this process, zygote undergoes cell division (mitotic divisions) and cell differentiation.

2. Zygote is the vital link, that ensures continuity of species between organisms of one generation and that ®f the next.

3. Development of zygote depends on,

6. The zygote develops into an embryo (embryogenesis).

8. Depending on whether the development of zygote occurs inside or outside the body of the female organism (parent), animals are categorized as oviparous and viviparous.

9. In flowering plants, the zygote is formed inside the ovule, where it develops into the embryo; simultaneously the ovule becomes the seed and the ovary becomes the fruit.

10. The seeds germinate after they are dispersed from the fruit and they produce new plants.