Question 3.
Give the formula to calculate Base address of one-dimensional array in memory.
Answer:
The formula to calculate the memory address of an array element is Base_Address + W ( Position – LB ) Where W is number of words per memory cell, position is location of array element for which memory address is calculated, LB is Lower bound (index) of an array.

Question 4.
What do you mean by access specifier ‘private’?
Answer:
Private access means a member data can only be accessed by the member function of that class only.

Question 6.
What is a field?
Answer:
Each column in a table is identified by a distinct header is called a field.

Question 7.
What is topology?
Answer:
It is the geometric arrangement of a computer system in network. Common topologies include a Linear bus, star, ring, and ring.

Question 8.
What is cyber law?
Answer:
The cyber law has been referred to as the Law of the Internet. Cyberlaw is the part of the overall legal system that deals with the Internet, cyberspace, and their respective legal issues.

Question 10.
What is XML?
Answer:
XML is a extended Markup Language for documents containing structured information. XML is a text-based markup language becoming the standard for data interchange on the web.

Question 11.
Use duality theorem to derive another boolean relation from A + A’B = A+B.
Answer:

Question 16.
What is data mining?
Answer:
It is the process of discovering interesting knowledge, such as patterns, associations, changes, anomalies from large amounts of data stored in databases using pattern recognition technologies as well as statistical and mathematical techniques.

Question 18.
What is topology? Mention the common topologies.
Answer:
Topology is the geometric arrangement of a computer system in network. Common topologies include a bus, star, ring and ring topologies.

2. Accelerated Graphics Port (AGP):
The AGP is an advanced port designed for Video cards and 3D accelerators designed by Intel. AGP is to provide enhanced graphic accelerator cards, thus enhancing the picture quality of the screen.

Question 20.
Explain basic gates.
Answer:
The three basic logic gates are NOT, OR and AND gate.
The NOT or inverter is a gate with only one input and one output. The standards symbol for NOT gate is
The truth table for
1. NOT gate:

The truth table for NOT gate:

2. OR gate:
The OR gate has two or more input signals but only one output. If any of the input signal is high the output is high.
The standard symbol for OR gate is

The truth table for OR gate.

3. AND gate:
The AND gate has two or more input signals with one output. When all the inputs are high, then output is high. The standard symbol of AND gate is

The truth table for AND gate:

Question 21.
Explain the memory representation of queue using one-dimensional array.
Answer:
Let Q be a linear array of size N.
The pointer FRONT contains location of front element of the queue (element to be deleted)
The pointer REAR contains location of rear element of the queue (recently added element)
The queue is empty when FRONT = 0
The queue is full when FRONT = N
To add element, REAR = REAR + 1
To delete element, FRONT = FRONT + 1

Every increment of cptr and printing the value at the location of pointer gives the next element of the character array.

A relation is in BCNF is, and only if, every determinant is a candidate key.

Question 25.
Write a short note on web servers.
Answer:
1. A web server is a computer on which a web site is hosted and a program that runs on such a computer. So the term web server refers to both hardware and software.

2. A web site is a collection of web pages stored or “hosted” on a computer that is connected to the internet. Such a computer is known as a Web Server.

3. A web server program is software that runs on the web site hosting Server computer. Its main purpose is serving web pages for requests from web browsers.

4. There are many web server programs available. The most famous and popular of them all is Apache developed by the Apache Foundation. It is free and also available for several operating systems including Windows, Macintosh, and Linux/Unix. 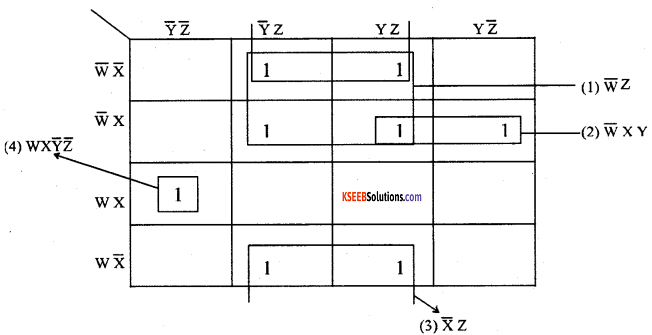 2. A doubly linked list:
is a list that has two references, one to the next node and another to previous

1. Object:
An object is a combination of code and data that can be treated as a unit. An object can be considered any real time entity (existing thing) that can perform a set of related activities.

2. Class:
The class is a collection of objects that have similar properties and common behavior.

3. Data Abstraction:
The process of hiding the representation of various data items and implementation details of a function from the user program is called data abstraction.

4. Encapsulation:
It is the method of combining the data, attributes, and methods in the same entity is called encapsulation.

6. Polymorphism:
Polymorphism is a Greek word that means Many Shapes. In OOP Polymorphism means the ability to take on many forms. The term is applied both to objects and to functions.

7. Inheritance:
Inheritance is the process by which new objects can acquire the properties of an existing objects of other class.

Question 30.
Explain how objects of a class can be defined?
Answer:
The objects are declared after a class is defined. The object declaration creates object of that class and memory is allocated for the created object. The object are created using the following
syntax:
classname objectname1, objectname2,
example:
student obj1, obj2;
the obj1 and obj2 are the objects of class type student.
The object names are used to access the data members through member functions by invoking member functions.
example:
obj1.getdata(5, 25);
here, metadata() is the member function of a class student and function call is give using object obj1 which assign the value 5 and 25 to the data members of the class. The memory is allocated separately for data members of each object.

The characteristics of friend function are:

Question 32.
An example show how constructors are used with = operator.
Answer:
The constructor argument if limited to single argument then = operator can be used to pass the values to these constructors. This is explained in the following example. 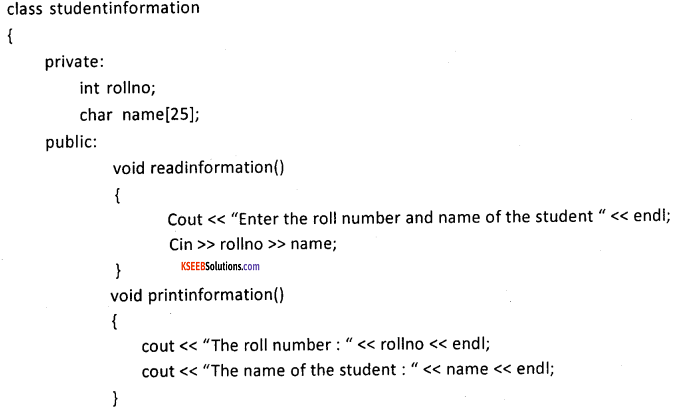 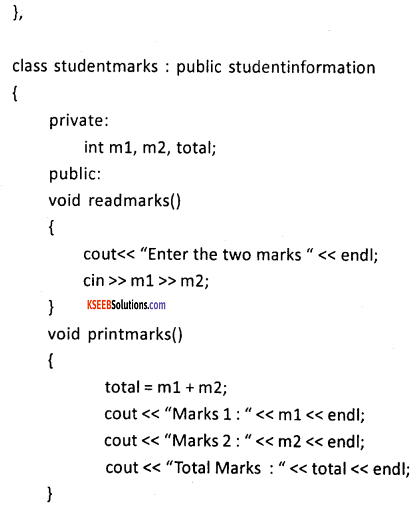 The records within the file are stored sequentially but directly accessed to individual records.
An indexed sequential access method (ISAM) consists of

1. Numeric functions:
a. ABS function- The ABS function returns the absolute value of the number you point to.

d. SORT function – The function SORT returns the square root of an argument.

The group functions are:

Question 42.
What is gateway? Explain.
Answer:
A network gateway is an internetworking system capable of joining together two networks that use different base protocols. A network gateway can be implemented completely in software, completely in hardware, or as a combination of both. The key feature of a gateway is that it converts the format of the data, not the data itself.

Gateway functionality differs in many ways. For example, a router that can route data from an IPX network to an IP network is, technically, a gateway. The same can be said of a translational bridge that, converts from an Ethernet network to a Token Ring network and back again.

Software gateways can be found everywhere. Many companies use an email system such as Microsoft Exchange. These systems transmit mail internally in a certain format. When email needs to be sent across the Internet to users using a different email system, the email must be converted to another format, this conversion process is performed by a software gateway.

In enterprises, the gateway often acts like a proxy server and a firewall. Gateways also associated with router and switch.