Question 3.
Mention the number of sidebands present in an AM wave.
Answer:
2 sidebands.

Question 8.
Write the meaning of MOV Rs, A.
Answer:
Copy the content of accumulator (register A) to R5

Question 10.
What is cell splitting?
Answer:
Cell splitting is the process of dividing the geographical area into many {smaller areas. 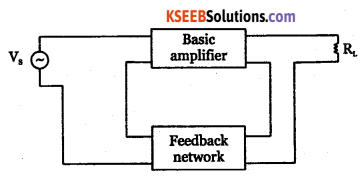 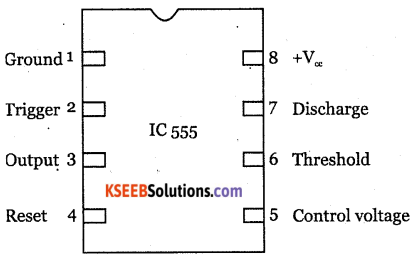 Question 16.
Mention the four modes of operation of TRIAC.
Answer:
A triac can conduct in both the directions. The conduction of a triac is initiated by injecting a current pulse into the gate terminal. The gate loses control over the conduction once TRIAC is turned ON. The TRIAC turns OFF only when the current through the main terminals becomes zero. 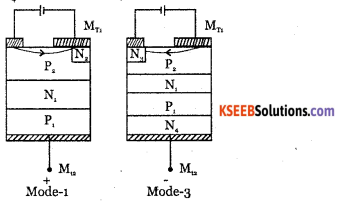 The three terminals of TRIAC are marked MT, (Main terminal 1), MT2 (Main terminal 2) and the gate G. As TRIAC is a bidirectional device and can have its terminals at various combinations of positive and negative voltages, there are four possible electrons potential combinations, as given below:

In trigger mode-3, the gate current IG forward biases the P2 P3 junction and large number of electrons are introduced in the P2 region by Nr Finally the structure P2 N1, P1, N4 turns on completely. 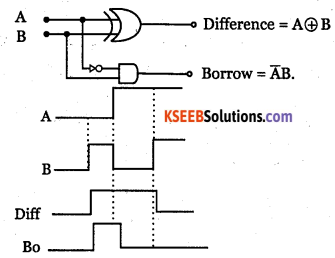 Question 18.
Give any two applications if Wi-Fi.
Answer:

(ii) Leakage current is the current through a device due to the motion of minority charge carriers under reverse biased condition.

(iii) Heat sink is a device which absorbs the unnecessary heat generated in the transistor and radiates it to surroundings and protects it.

Question 23.
Determine Vdc and Idc of SCR half wave rectifier. Given firing angle is 30° and rms voltage of ac input to the rectifier is 30V and load is 10Ω.
Answer: 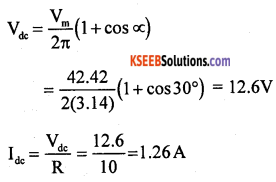 Question 26.
Explain with diagram, the working of a satellite transponder system.
Answer: 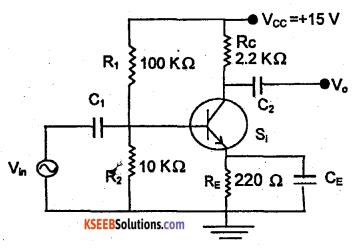 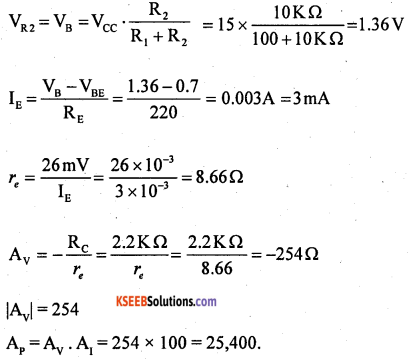 Question 28.
Calculate output voltage V0for the circuit given below. 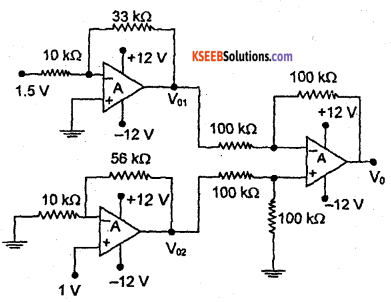 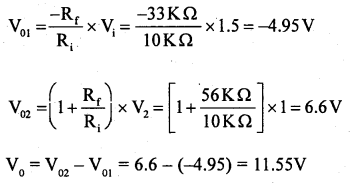 Question 29.
A Colpitts oscillator circuit generates a frequency of 24 KHz. The capacitors used in the tank circuit are Ct = 0.2pF and C2 = 0.22pF. Calculate the value of an inductor L and feedback factor β.
Answer: 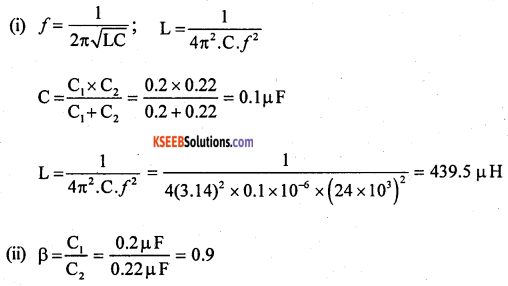 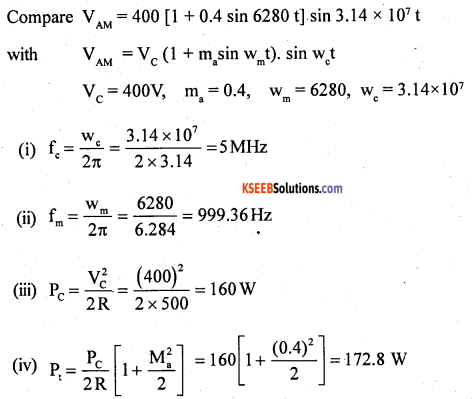 RC coupling is most widely used method of coupling signal from one stage to next stage in multistage amplifiers. The two stage RC coupled amplifier is as shown in the diagram. The signal developed across the collector resistor Rc of the first stage is capacitively coupled to the input of second stage through the coupling capacitor Cc.

R1R2,Rc,RE provide biasing resistors. RE provides stabilisation and CE is used for bypassing ac across Rg.

Cc blocks DC and allows AC to pass through. The second stage further amplifies the signal, further providing a phase reversal of 180° with respect to its input. The input and output signal are in phase as the signal is reversed twice. Overall gain of RC coupled amplifier is the product of gain of individual stages.

Question 33.
What is an integrator? With circuit diagram, obtain an expression for output voltage of an op-amp integrator.
Answer.

Integrator is a circuit whose output is proportional to integral of its input.

when turned to the desired frequency. The RF amplifier is designed to handle large bandwidth of 150 kHz.

IF amplifier: IF signal is amplified by one or more number of amplifiers, which raises the strength of IF signal. It has multistage class A amplifier providing better selectivity and gain.

Limiter: It removes all the amplitude variation in FM signal caused by noise. Differential amplifiers are preferred for limiter.

AF amplifier: It amplifier the modulating signal recovered by the FM detector. The speaker converts the electrical signal into sound signal.

Question 35.
(a) What is a register? Mention the different types of shift registers.
Answer:

(b) Draw the logic diagram of clocked SR flip-flop.
Answer:

Question 36.
Write an assembly language program to subtract 23 H from 3 F H when CY = 0 and save the result in Rs.
Answer: 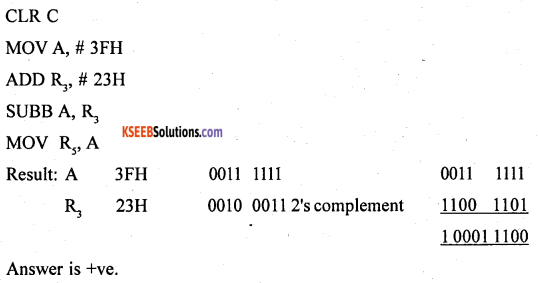