Question 2.
Define ‘drift velocity’ of free electrons.
Answer:
It is defined as the average velocity with which free electrons get drifted towards the positive end of a conductor (opposite to the electric field) under the influence of an external electric field.

Question 3.
Give an application of cyclotron.

Question 4.
State Faraday’s law of electro magnetic induction.
Answer:
The magnitude of induced emf is directly proportional to the rate of change of magnetic flux lined with the coil.

Question 5.
If the peak value of a.c. current is 4.24 A, what is its root mean square value?
Answer:

Question 6.
Mention one power loss in the transformer.
Answer:
Loss due to heating.
Loss due to flux linkage.
Loss due to eddy currents.
Hysteresis loss.

Question 8.
The decay of proton to neutron is possible only inside the nucleus. Why?
Answer:
Proton has smaller mass than a neutron.

Question 9.
What is ‘depletion region’ in a semiconductor diode?
Answer:
The space-charge region on either side of the junction (where there is a reduction/ decrease/depletion of mobile charge carriers) is called depletion region.

Question 10.
What is the output of the combination?
Answer:

Question 15.
Give any two applications of X-rays.
Answer:
X-rays are used

Question 16.
What is ‘myopia’? How to rectify it?
Answer:
Myopi: It is a defect of human eye which can see near objects clearly but cannot see the far objects clearly. It can be corrected by using a concave lens of suitable focal length. 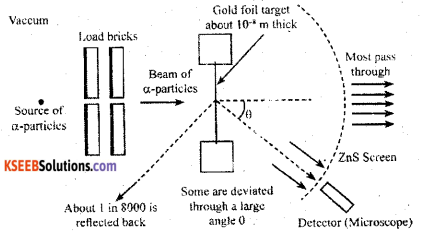 Question 20.
State Ampere’s circuital law and arrive at the expression for magnetic field near a straight Infinite current carryi ng wire.
Answer:
The line intergral of \(\overrightarrow{\mathrm{B}} \cdot \mathrm{d} \overrightarrow{\mathrm{l}}\) around any closed path enclosing a surface is times the total steady current passing through the surface. Consider a straight conductor of infinite length in the plane of the paper. Let I be the current through it from X to Y. Let P be a point at a perpendicular distance r from the straight wire. Consider a circle of radius r around the wire passing through P as an amperian loop. The magnetic field \(\overrightarrow{\mathrm{B}}\) at P due to the current in wire is tangential to the circle. Hence the magnetic field \(d \vec{l}\) is parallel to the line element at P. 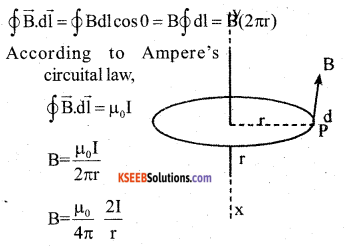 Coercivity :
The magnetizing field (H) needed to demagnetize the magnetic material completely is known as coercivity. 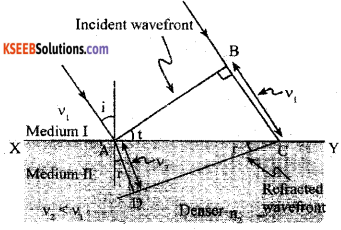 Answer:
Let XY represent the surface separating the medium-I and medium – II. Let V1 and V2 be the speed of light in medium -1 and medium- II respectively. Consider a plane wave front AB incident in medium-I at an angle i. Let the secondary wavelet from B strike the surface XY at C in a time t, then BC = V1t Secondary wavelet from A will travel a distance V2t as radius draw an arc in the medium II. The tangent from C touches the arc at D.
Let r be the angle of refraction. 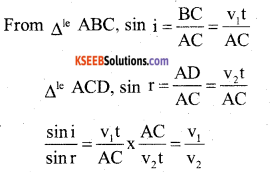 If c represents the speed of light in vacuum then,

This is the Snell’s law of refraction.

Second Postulate : Electrons revolve around nucleus only in such orbits for which the angular momentum is some integral multiple of (h/2 π).

Third Postulate : When an electron makes a transition from one of its non-radiating orbits of another of lower energy, a photon is emitted having energy equal to the energy difference between the two state. The frequency of the emitted photon is the given by, hv = Ei – Ef

Question 24.
Derive the expression for the half-life of a radio active nuclide.
Answer:
At time t the number of atoms present in a radioactive sample is. 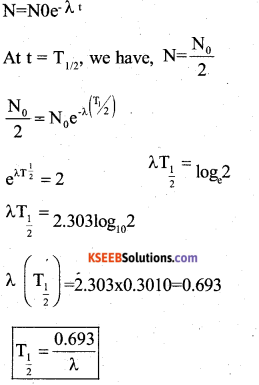 Total work done in moving a unit positive change from infinity to the point P is,

By definition, this work done is equal to the electrostatic potential (V) at that point due

Question 28.
Obtain the expression for the effective emf and the effective internal resista nee of two cells connected in parallel such that the currents are flowing in the same direction.
Answer:
Let ε1, and ε2 be the emfs of the two cells connected in parallel.
Let r1, r2 be their internal resistances respectively.
I1 and I2 are the currents leaving the positive electrodes of the cells.
At B1, currents I1 and I2 flow in whereas the current I flows out. Therefore I = I1 + I2 Let V1, and V2 be the potentials at B1 and B2 respectively.
P.d across the first cell is V1 – V2 = V = ε1 – I1r1 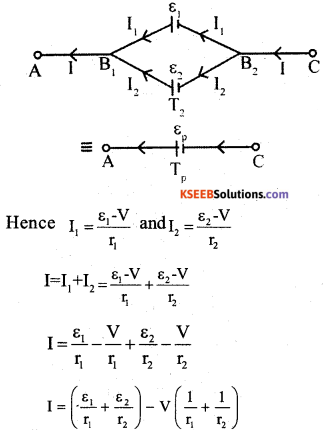 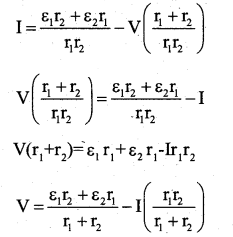 Question 29.
Derive the expression for the magnetic field on the axis if a circular current loop, using biot-Savart’s law.
Answer:
Consider a circular loop in the Y-Z Plane with its centre at the origin O.
Let R be the radius of the loop and I is the steady current through the loop in anticlock wise direction.
Consider a point P on the axis of the loop coinciding with X-axis at a distance x from O.

The magnitude of magnetic field at P due to current element dl is given by,

Question 30.
Arrive at the expression for the impen dance of a series LCR circuit using phasor diagram method and hence write the expression for the current through the circuit
Answer:
Consider a resistance R, an inductor of self inductance L and a capacitor of capacitance C connected in series across an AC source. The applied voltage is given by,
v = v0 sin ωt ………….. 1 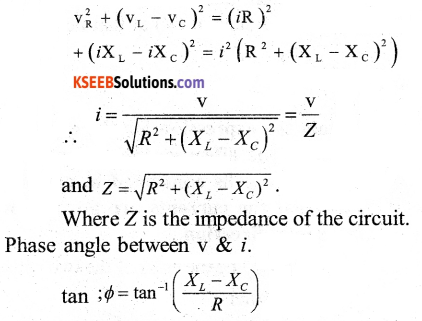 Question 31.
Deduce the relation between n, u, v and R for refraction at a spherical surface. where the symbols have their usual meaning.
Answer: 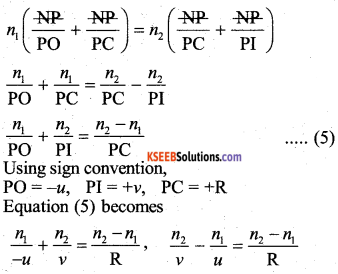 Question 32.
What is a rectifier? With suitable circuit describe the action of a fullwave rectifier by drawing input and output waveforms.
Answer:
The device which is used to convert AC into DC.

Question 33.
Three charges each equal to +4nC are placed at the three corners of a square of side 2 cm. Find the electric field at the fourth corner.
Answer: 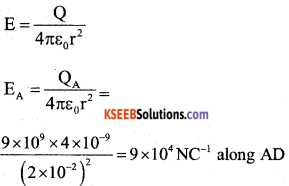 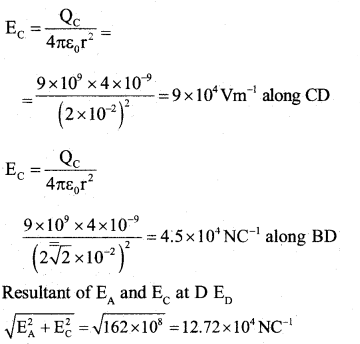 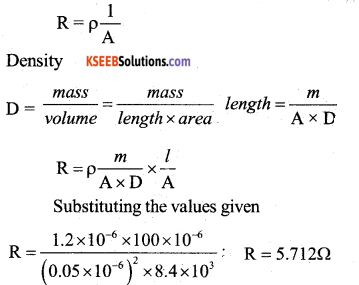 Current Imx=0.1047 sin40t A or Imax =0.1047A
(Note: since it is not mentioned either instantaneous or maximum or average value of induced emf in the question, if a student calculates by mentioning any of the above values marks can be awarded, also for the other values of θ = ωt)

Question 36.
In Young’s double slit experiment the slits are separated by 0.28 mm and the screen is placed at a distance of 1.4 m away from the slits. The distance between the central bright fringe and the fifth dark fringe is measured to be 1.35 cm. Calculate the wavelength of the light used. Also find the fringe width if the screen is moved towards the slits, for the same experimental set up.
Answer:
β = \(\frac{\lambda \mathrm{D}}{\mathrm{d}}\) Given the distance of the fifth dark fringe from the central bright fringe =1.35 cm