High Lights of the Topic:

→ “Vital statistics is the science which deals with analysis and interpretation of numerical facts regarding vital events occurring in a human population.”

Vital statistics are useful in the following purposes:

→ To study the demographic structure and trend in the population.

→ In public administration such as in planning, evaluation of economic and social development, to assess the impact of family welfare programmes of the country.

→ To operating agencies such as governments for administrative purposes, Insurance agencies where actuarial are calculated for the life insurance policies.

→ To researchers in fields of demography, pharmaceutical, sociological and Medical

→ They are highly useful to an individual by the way of recording birth, death, marriage, and divorce during his or her life time.

→ They are also of great use in international point of view.

→ Vital statistics can be obtained by the following methods:

2. Census method:-
→ ‘This is the method of complete enumeration of each and every vital events of the population at equal intervals’. In India once in every 10 years (Decennial) population census is conducted. In these censuses, information regarding birth, death, gender, marriage, literacy, occupation/ employment, economic status etc, are collected.

→ This method is accurate and more exhaustive than vital statistics obtained by registration method. But for the years other than census year they are out dated, so the information is available for the census year only. Census data fail to provide vital statistics for intercensal years.

I. Measurement of population:

→ Fecundity refers to a ‘the capacity of a woman to bear children’.
The different measures of fertility are:

4. Total fertility Rate:
When fertility of different populations is needed to compare total fertility is used. It is the average number of children that would be born to a woman over her lifetime if she were to survive through the end of her reproductive life.

‘It is sum of ASFRs calculated at 5 years age interval ie Quinquennial A.S.F.R’s OR It is the sum of annual ASFRs for all the ages’.
i.e. TFR = 5 Σ Quinquennial ASFR OR
TFR = Σ Annual ASFR
TFR divided by 1000 gives average number of children born in life time to one woman.
ie. Average number of children born per women = \(\frac{\mathrm{TFR}}{1000}\)

2. Net Reproduction Rate [NRR]:
It is defined as the average number of daughters that would be born to a female, if she passed through her life time conforming to the ASFR and Mortality rates of a given year.
NRR = i × (Sum of the specific fertility rate for all groups) × Survival rates

→ The decrease of population due to deaths is measured by a Death Rate or mortality rate. Here ‘morality refers to deaths occurring in the population’.

→ Deaths may occur to persons of different ages and due to different causes.

The following are the important measures of mortality

2. Age Specific Death Rate (ASDR):
The crude death rate ignores the age composition. Specifically in the group (0-5) and (Above 60) the death rate is more and it is less in the age group of (25-40). Thus, we define age- specific death rates.

Note: One may also calculate cause-specific-death-rates due to Road accidents, Heart attacks, Cancer or AIDS etc.

→ ‘Life Table is a tabular presentation of numerical data describing the mortality experience of a cohort’.

→ Here Cohort is a group of individuals who are assumed to born at the same time and experience the same mortality conditions. The size of the cohort is called Radix.

The following are the components of a Life Table:

Components of Life table can also be explicitly written as below:- 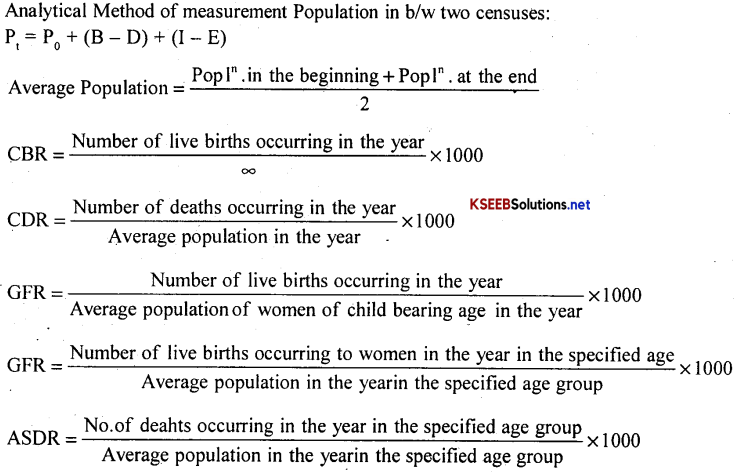 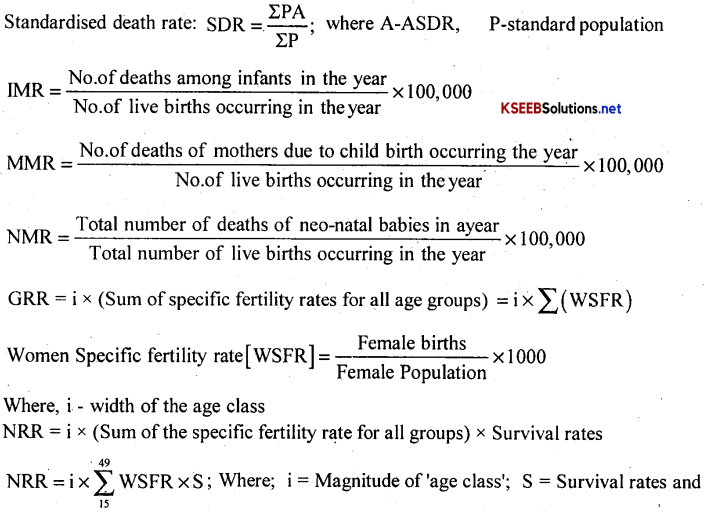