High Lights of the Topic:

→ Strategic problems relating to military forces, a group of scientists and experts, suggested appropriate allocations of available resources, and they helped in elficient handling the complex military operations, such as detection of enemy submarines, anti aircrafts, fire control etc, and they called the concept as Operations Research (OR).

→ However afterwards the science becomes popular, the applications (uses) of OR was applied to general problems such as, problems concerning Industry, Marketing, Personnel management, Inventory control, etc.

→ Therefore OR can be defined as “It is the method of application of scientific methods, techniques and tools to problems involving the operations of a system, so as to provide those in control of the system with optimum solutions to the problem.”

Some of the problems in real life situations (problems) discussed in Operations Research (OR), are-
(i) Linear programming problems(LPP) are used in Industries for effective use of men, machine, money and material.

(ii) Transportation problem (TP) helps in shipment of quantities from various sources to different destinations at a minimum cost.

(iii) Game theory is applied in conflicting situations, to suggest the best strategy.

(iv) Replacement problems helps in suggesting the best time period to replace a specific part in manufacturing process, and

(v) Inventory problems help in organizing stocks and maintaining costs, and so on.

→ In many Economic activities, i.e. of Business and Industrial field, we often face the problems of decision making or optimization (may be Maximization/Minimization) of profit, sales, cost, labour etc, is very important. On the basis of available resources(called constraints), such as Demand for commodities, availability of raw materials, storage space, variation in costs, etc, In such situations where conditional optimization is required we may adopt ‘Linear programming’ model.

→ It was in 1947 that George Dantzig and his associates introduced the Linear programming technique and simplex method of solving problems concerning military activities.

→ Here “Linear programming is a mathematical technique which deals with the optimization (Maximization or Minimization) of activities subject to the available resources.”

For example:
1. A biscuit manufacturing factory may be interested in taking decisions regarding the type of biscuits to be manufactured and the quantity produced so as to earn maximum profit.

2. A factory having some machines to manufacture cars would like to know the best way to utilize the machines so that maximum production is made possible in minimum time available,

Example:
A manufacturer produces two models of products Model A and Model B
(i) Model A fetches a profit of Rs.200/- per set. Whereas Model B fetches Rs.500/- per set.

(iii) Model A requires 4 hours and Model B requires 8 hours labour. The total labour available is 160 hours per week.

→ The manufacturer’s problem can be mathematically written down (formulated) as follows:-

→ Definition: Linear programming deals with the optimization of a linear function of variables known as ‘objective function’ subject to a set of linear equalities / inequalities known as constraints.

Finding the solution to a LPP by graphical method:

Note: Feasible can lie/exists only in First quadrant’: because for the given LPP, the solution . can exists only on xy-plane, because of the non-negativity restrictions, x and y both are positive on xy-plane.

→ Degenerate solution: When the number of positive allocations in any BFS is less than (m + n – 1), then the solution is said to be degenerate.

→ Non-degenerate solution: The number of positive allocations in any BFS is exactly (m + n – 1), then the solution is said . to be non-degenerate.

→ Optimal solution: A feasible solution is said to be optimal if it minimizes the total transportation cost.

→ Finding the initial solution:
An B.F.S. is obtained by :

Step III:
The above procedure is repeated until all the availabilities of the origins are allocated to requirement of the different destinations.

Step I :
Identify the least cost in the cost matrix (called matrix minima) of the T.P. table.
Let Cij be the least cost then allocation is made at the cell (i, j) as:
xij = min (ai, bj)

Step II:
(a) If ai > bj, jth column is deleted and ai is replaced by (ai – xij ), repeat step I:
{here dealer is satisfied so deleted, factory availabilities are more}

(b) If ai < bj ith row is deleted and bi is replaced by (bj – xij), repeat step I.
{here factory availabilities are exhausted}

(c) If ai = bj, ith row and jth column are deleted
{where both dealer and factory are satisfied}

Step III:
The above procedure is repeated until all the availabilities of the origins exhausted

→ Definition “Whenever there is a situation of conflict and competition between two or more opposing teams, we refer to the situation as a game” (It is science of conflicts)

→ In a game when each player chooses a possible action, then we say that a play of the game has resulted.

Assumptions/properties/characteristics of a competitive game

→ Zero-sum game:- A game in which sum of the gains (pay-offs) of the players is zero is called ‘zero sum game’

→ Two-person-zero-sum game:- If in a game of two players, the sum of gain of one player is equal to the sum of loss of other is known as ‘two-person zero-sum game’. Also called as ‘Rectangular Game’.

→ Strategy:- In a game, the strategy of a player is the predetermined rule by which he chooses his courses of action while playing the game.

→ Mixed strategy:- While playing a game, mixed strategy of a player is his pre-decision to choose his course of action according to certain pre-assigned probabilities.

→ Maximin:- Maximum of the row minimums in the payoff matrix is called Maximin. max

→ Minimax:- Minimum of the column maximums in the payoff matrix is called minimax.

→ Saddle point:- Saddle point is the position where the maxmin and the minimax coincide – i.e. α = β = v

→ Value of the game:- Common value of maxmin and minimax denoted by ‘V’.

→ Fair game:- If the value of the game is zero, then the game is called fair game otherwise unfair.

I. Solution to a game with saddle point:-

The saddle point of the game is found as follows:
1. The minimum payoff in each row of the payoff matrix is circled as : ○

2. The maximum payoff in each column is boxed as: ▢
→ In the above process, if any payoff is circled as well as boxed, that payoff is the Value of the game (v).
The corresponding position is the saddle point

→ Indicate the position of the saddle point, and then suggest the strategy for players.
Also, write down the value of the game.

→ “If the strategy of a player dominates over the other strategy in all conditions, then the latter strategy can be ignored because it cannot affect the solution in any way”

Rules:
1. If all the elements in a row (say ith row) of a payoff matrix are greater than or equal to the corresponding elements of the other row (say jth row) then ith row dominates jth row , then jth row can be deleted.

2. If all the elements in a column (say rth column) of a payoff matrix are less than or equal to the corresponding elements of the other column (say sth), then rth column dominates sth column. So sth column casn be deleted.

Repeat the process till optimal strategy is obtained.
Note:- To Get a Transpose of a matrix write aij to – aji Rows into columns with sign change.

Replacement theory deals with the problems of deciding the age at which the old equipments (machine and their spare parts, trucks etc.) are replaced.

Following are the needs:

Replacement of equipments, which deteriorates with age:
Machine and their spare parts, trucks etc. deteriorates with time, their maintenance cost increases and efficiency reduces. Hence, their replacement becomes necessary. Therefore, purchasing cost, resale value, maintenance cost etc. change with time. However, here we are not considering change in the money value.

The Average annual cost is- A(N) = \(\frac{\mathrm{T}}{n}\)
Where P = capital (purchasing) cost of an equipment;
Sn = Resale value (scrap value, salvage cost) of an equipment at age ‘n’
Ci = Maintenance cost at time i = 1, 2,…. n years
The optimal replacement time is that value ‘n’ for which A(n) is least. Ie the equipment is suggested to replace at that period Where the Annual Average Cost A(n) ceases to decrease,

→ An Inventory is a physical stock of goods, which is held for purpose of future production or sales.

→ Inventory may be that of

→ A problem concerning such a stock of goods is Inventory problem. The object of analysis of inventory problem is to decide when and how much to be acquired, so that the cost is minimized and profit is maximized.

Need:
An inventory is essential for the following reasons:-

However, the inventory has disadvantages such as, warehouse rent, labour of maintenance loss due to fall in price, interest on capital invested, deterioration of goods etc.

(a) Purchasing cost (P): It refers to the cost associated with an item whether it is manufactured or purchased. (Also called as Capital cost)

(b) Set up cost (C3): It is the cost of setting up the machines for production or the cost of placing the order for the goods: It includes labour cost, transportation cost etc. It is also called as ordering cost, Replenishment cost, or Procurement cost. Denoted by C3.

(c) Holding cost (C1): It is the cost associated with carrying or holding/ the goods (Inventory) in stock until the goods are sold or used. (It includes rent for space, interest on capital invested, maintenance of records, taxes, insurance and breakages.)
Here Carrying cost (C1) is also the percentages (%) of the capital cost. So C1 = PI
Holding/Carrying cost per unit time per unit good is denoted C.

(d) Shortage cost (C2): The cost associated with delay or inability to meet the demand because of shortage of stock is called shortage cost. Also called as penalty cost-C2.

→ Lead time: – The time gap between placing of order and arrival of goods at the inventory is the Lead time (Delivery lag)

→ Quantity delivered (Depletion): It is the number of units of goods delivered.

→ Time horizon (T): The period over which inventory level is maintained is called Time horizon.

→ The Economic Order Quantity (EOQ): The EOQ is the size of the order for which the aggregate of setup cost and holding cost of the Inventory is minimum.

The Assumptions for this Model are:

Diagram of EOQ Model-I without shortages

Here the initial level Q of the inventory depletes in time t at the rate R to the zero level. After time t, then Inventory is replenished by Q units and the cycle continuous. Here ?OAB indicates the Inventory carried.

Diagram of EOQ Model-II with shortages 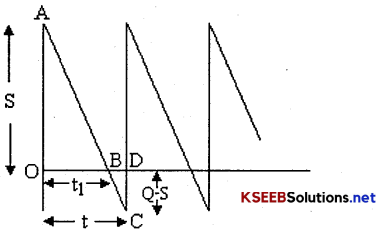 Here at the time of replenishment, there would be a shortages (Q-S) units and so, the level of inventory would be S. This level depletes in time t1 to zero. Here ?OAB represents the Inventory carried and ∆BCD represents the shortage carried. 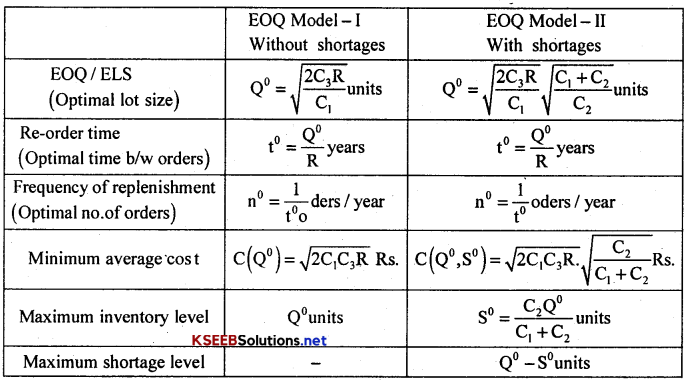