Grandma Climbs a Tree Poem Summary in English and Kannada

The poem Grandma Climbs a Tree’ portrays Ruskin Bond’s love for his family. The storyline is as follows: Ruskin Bond, in this poem tells us how his grandmother had a passion for climbing trees from a very young age and how she could climb trees till the age of sixty-two! The only problem was that Bond’s family was scared that one day, she would fall.

Once when everyone except Grandma was out- of town, the old lady climbs a tree but is unable to come down. After being ‘rescued’ as Bond puts it, the doctor advises her rest. However, Grandma is not able to live without a tree, so she tells Bond’s father to build a tree-house.

Accordingly, Bond and his father build a tree-house and this way, Bond and his Grandma spend evenings sitting in the tree- house, drinking sherry. This poem shows the unconditional love Bond has towards his family. It shows his ability to enjoy unusual events and actions. 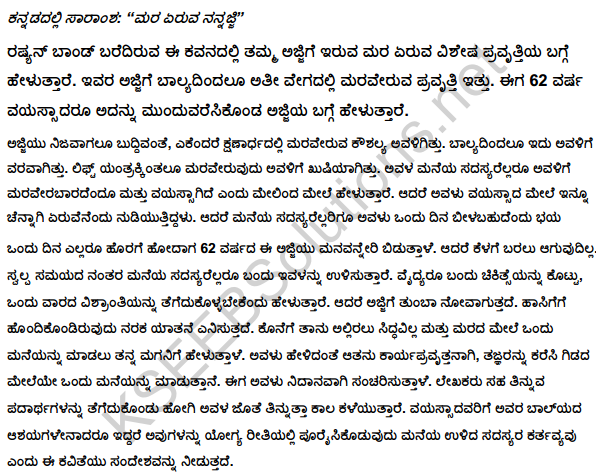 Grandma Climbs a Tree Poem About the Author

Ruskin Bond was born on 19 May 1934 in a military hospital in Kasauli, to Edith Clerke and Aubrey Bond. His siblings were Ellen and William. Ruskiri’s father was with the Royal Air Force. When Bond was four years old, his mother separated from his father and married a Punjabi-Hindu, Mr. Hari, who himself had been married once.

Bond spent his early childhood in Jamnagar and Shimla. At the age of ten Ruskin went to live at his grandmother’s house in Dehradun after his father’s sudden death in 1944 from malaria. Ruskin was raised by his mother. He completed his schooling at Bishop Cotton School in Shimla, from where he graduated in 1952 after winning several writing competitions in the school like the Irwin Divinity Prize and the Hailey Literature Prize.

Following his high school education he went to his aunt’s house in England and stayed there for four years. In London he started writing his first novel, “The Room on the Roof, the semi- autobiographical story of the orphaned Anglo-Indian boy Rusty. It won the 1957 John Llewellyn Rhys prize”, awarded to a British Commonwealth writer under 30.

Bond used the advance money from the book to pay the sea passage to Bombay. He worked for some years as a journalist in Delhi and Dehradun. Since 1963 he has lived as a free-lance writer in Mussoorie, a town in the Himalayan foothills. He wrote Vagrants in the Valley, as a sequel to The Room on the Roof. These two novels were published in one volume by Penguin India in 1993. The following year a collection of his non-fiction writings, The Best of Ruskin Bond was published by Penguin India. His interest in the paranormal led him to write popular titles such as Ghost Stories from the Raj, A Season of Ghosts, and A Face in the Dark and other Hauntings.